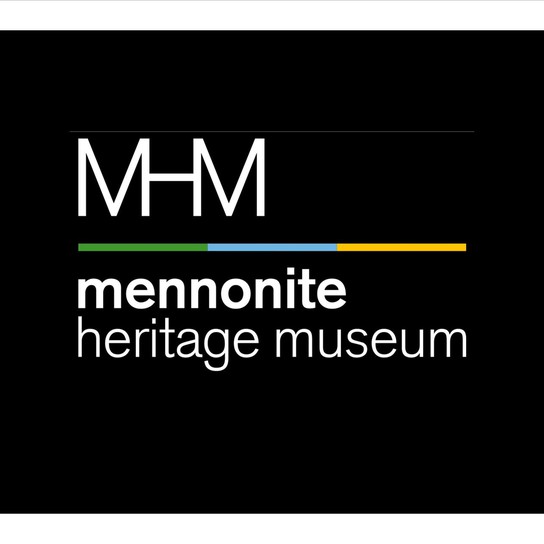 "The Confession" by Richard Toews

"The Confession" by Richard Toews 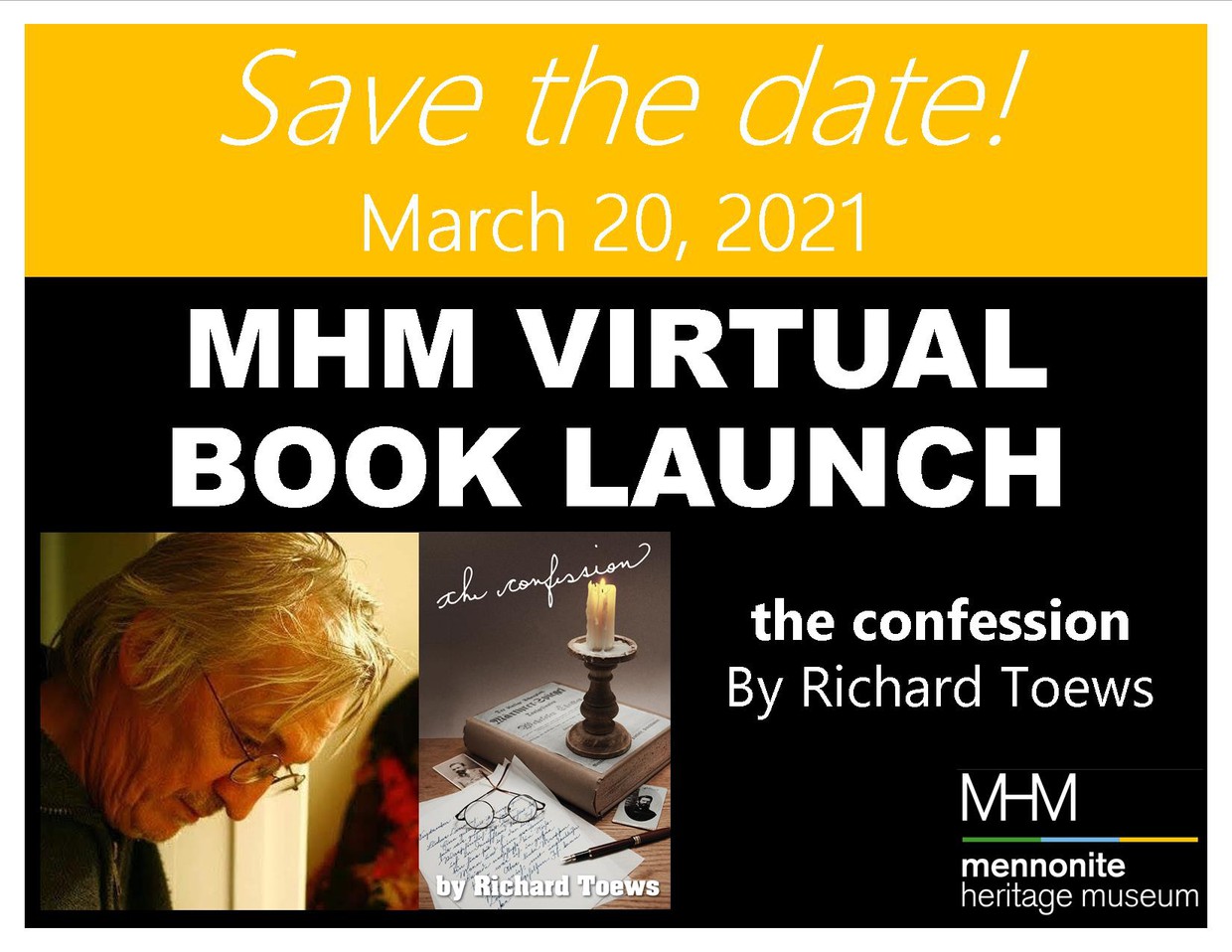 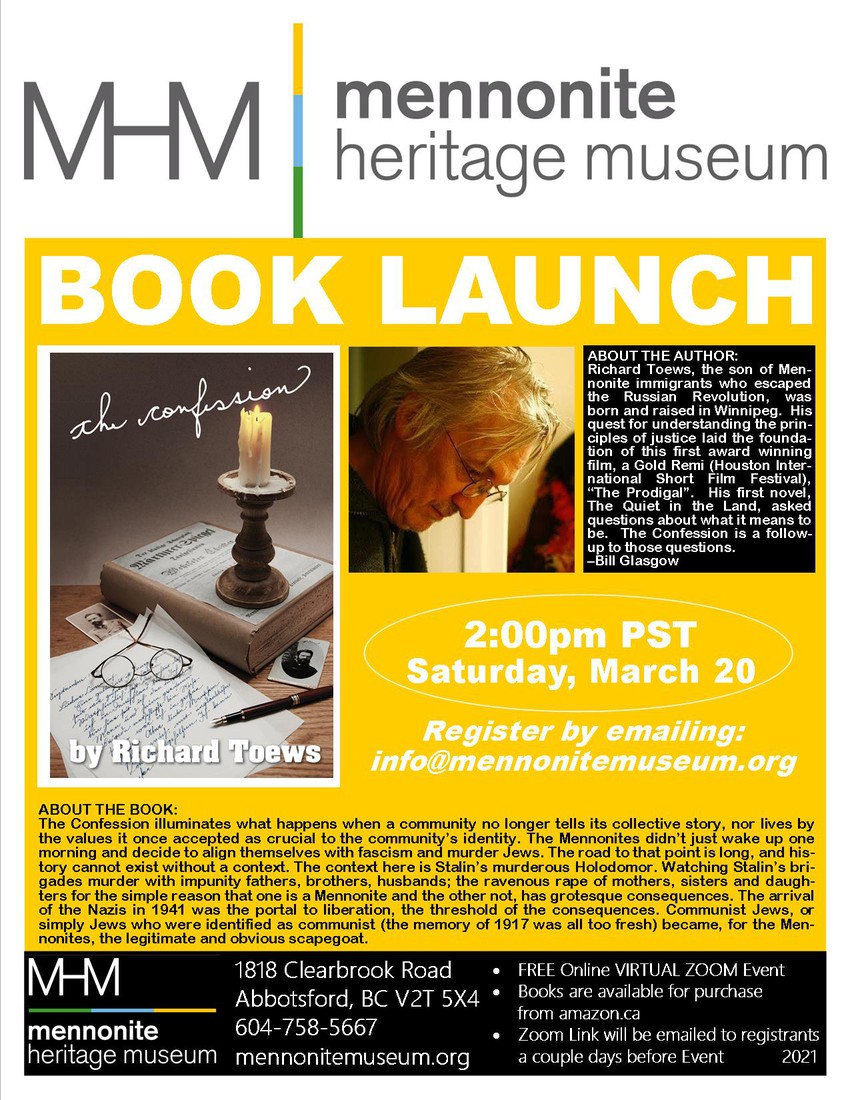 Don't miss your chance to get your copy of the book and ask your questions!

Register to get your ZOOM link a few days before the event: 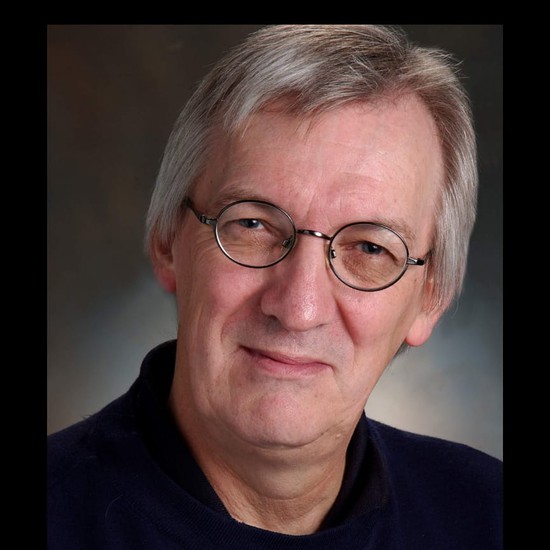 Richard Toews is the son of Isaak and Frieda Toews, immigrants who escaped the Russian Revolution and the aftermath of its horror. Born and raised in Winnipeg, Richard experienced a somewhat bucolic, unspoiled life. Growing up in a Mennonite community in Winnipeg afforded Richard a sense of religious privilege often unattributed to outsiders, to the non-Mennonite. Growing up, Richard dutifully fulfilled his obligations ascribed to a young Mennonite man seeking admittance to the Mennonite fold, which was the church.

Following graduation from high school, Richard spent two years at Winkler Bible School, where he studied music. Bible School was followed by two years at Mennonite Brethren Bible College (MBBC). It was at MBBC that the first stirrings of change came about within Richard’s consciousness. What was it about Mennonite identity that set the Mennonite community apart from all others? A deeply engrained love of justice, or at least so he thought, to face the world squarely, with intension to say NO to injustice. For Richard, the next step was self-evident. A course of study to understand what the Old Testament prophets meant by Prophetic Justice; to make clear what it means to raise the dignity of ALL humans to the degree that the Other, the poor, the wretched of the earth were fully humanized. It was out of his experience, living in East London, with those society regarded as having no value that Richard came to write the “Quiet in the Land,” a novel which explored the question: what would happen if a young Mennonite man, growing up in a Mennonite colony in Ukraine, came to the realization that a contradiction existed between the preached Mennonite theology of peace and justice and the social reality of treating their Russian peasant servants with less value than their cattle. Such a young man might become a revolutionary in order to bend the curve back towards justice.

Following closely the publication of “The Quiet in the Land¸” Richard chanced upon information that during the Nazi invasion of Ukraine, in 1941, Mennonites had colluded with the Nazis in the extermination of Jews in Ukraine. Given his already tempered sense of Prophetic Justice—how would the prophets respond—Richard took up the call to write, “The Confession,” a novel that addresses the complicity in great evil due to silence, the failing to raise one’s voice in the face of evil. Aside from Richard’s novels, Richard has also written, directed and produced the short film “The Prodigal” (winner of a “Gold Remi” at the Houston International Film Festival). “The Prodigal” depicts a somewhat darker interpretation to the biblical account.

A note about the author:

Richard’s work in East London was the culmination of his dissertation for a PhD in Interdisciplinary Studies at Simon Fraser University (SFU) with a focus on Anthropology, Religious Studies, Literary Criticism and History. On completion of his PhD, Richard was offered a position at Simon Fraser University where he taught for ten years in the Department of Anthropology/Sociology but on loan to the First Nations Institute.

www.facebook.com
Time for an update. I am now able to provide more detail as to the book launch. It will be a virtual launch, hosted by Richard D. Thiessen of the... 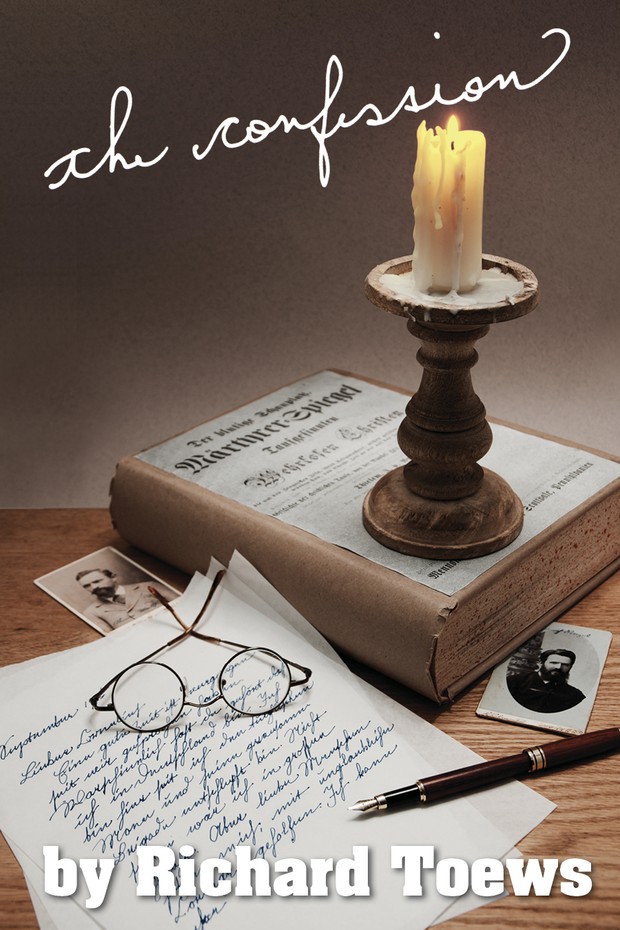 Mennonites have, historically, registered as pacifists. It comes, then, as profound shock to realize that WWII brought about a sea change within the Mennonite community in Ukraine. Notably, the consequence of Operation Barbarossa (1941). Cornelius, the protagonist feels compelled to make
his confession. His “sin”? Silence in the face of the Mennonite collusion with Himmler and the Nazi program of annihilating the Jews in the Shtetel Fedorowka. Silence when a voice was needed to challenge his pastor, Otto, who led an Einsatzgruppe company. Cornelius’s confession is the
coming to terms with his failure to give expression to his horror over the rush to “sacred” violence in the participation of the Ukrainian Holocaust and the valorizing of the persons, Hitler and his devoted henchman Heinrich Himmler. But this grotesque narrative did not just happen in isolation. The Confession illuminates what happens when a community no longer tells its collective story, nor lives by the values it once accepted as crucial to the community’s identity. The Mennonites didn’t just wake up one morning and decide to align themselves with fascism and murder Jews. The road to that point is long, and history cannot exist without a context. The context here is Stalin’s murderous Holodomor. Watching Stalin’s brigades murder with impunity fathers, brothers, husbands; the ravenous rape of mothers, sisters and daughters for the simple reason that one is a Mennonite and the other not has grotesque consequences. The arrival of the Nazis in 1941 was the portal to liberation, the threshold of the consequences. Communist Jews, or simply Jews who were identified as communist (the memory of 1917 was all too fresh) became, for the Mennonites, the legitimate and obvious scapegoat. 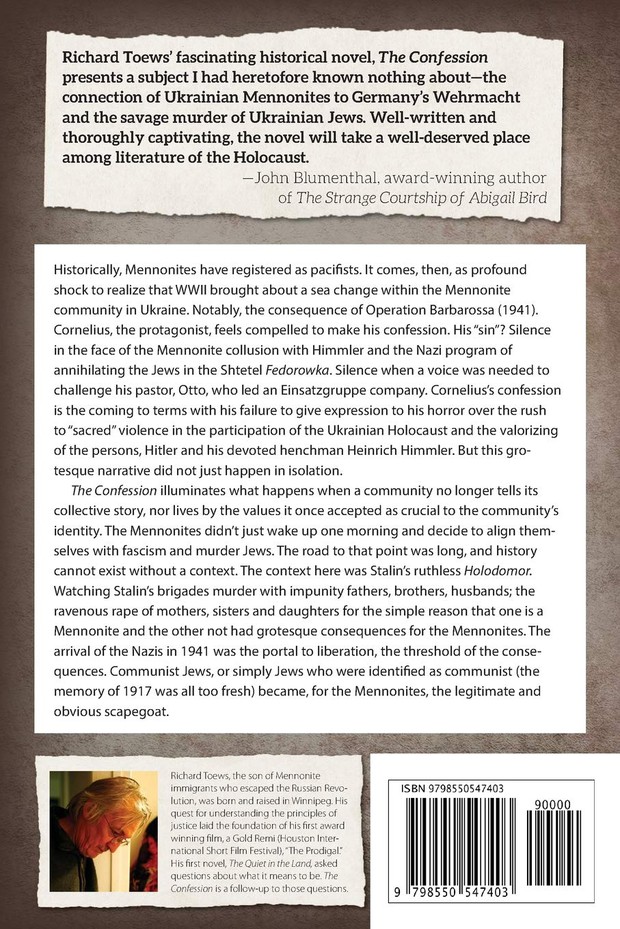 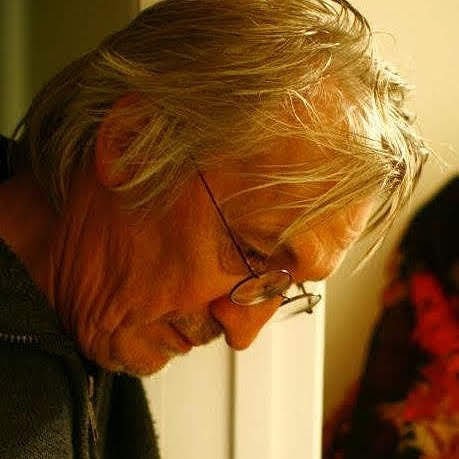 "Well-written and thoroughly captivating, the novel will take a well-deserved place among literature of the Holocaust." John Blumenthal, award-winning author of The Strange Courtship of Abigail Bird.

“Mennonite participation in the Holocaust has been a hot topic lately. Richard Toews' heartbreaking novel on Mennonites in Ukraine during the German occupation in 1941 is an essential contribution to that discussion.” –Robert Martens, Editor, Roots & Branches

Chosen Nation: Mennonites and Germany in a Global Era by Benjamin W. Goossen

Richard Toews' previous book: The Quiet In the Land 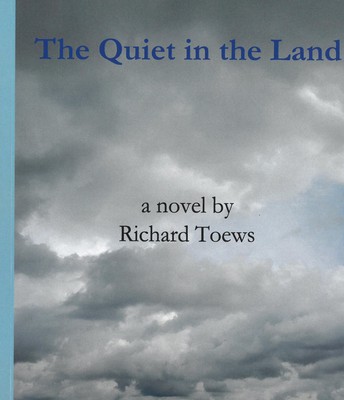 The Quiet In the Land

The first novel by Richard Toews. 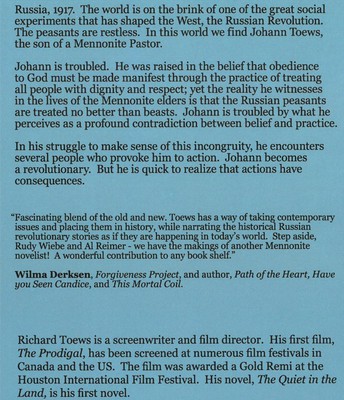 Russia, 1917. The world is on the brink of one of the great social experiments that has shaped the West, the Russian Revolution. The peasants are restless. In this world we find Johann Toews, the son of a Mennonite Pastor.

Johann is troubled. He was raised in the believe that obedience to God must be made manifest through the practice of treating all people with dignity and respect; yet the reality he witnesses in the lives of the Mennonite elders is that the Russian peasants are treated no better than beasts. Johann is troubled by what he perceives as a profound contradiction between belief and practice.

In his struggle to make sense of this incongruity, he encounters several people who provoke him to action. Johann becomes a revolutionary. But he is quick to realize that actions have consequences. 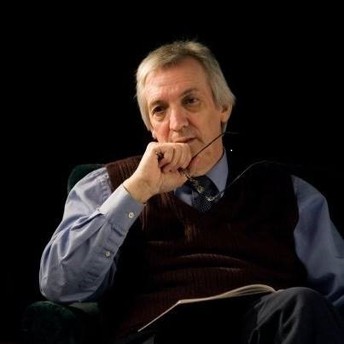 A Review of "The Quiet In The Land"

“Fascinating blend of the old and new. Toews has a way of taking contemporary issues and placing them in history, while narrating the historical Russian revolutionary stories as if they are happening in today’s world. Step aside Rudy Wiebe and Al Reimer — we have the makings of another Mennonite novelist! A wonderful contribution to any book shelf.”

-Wilma Derksen, Forgiveness Project, and author, Path of the Heart, Have you seen Candice, and This Mortal Coil. 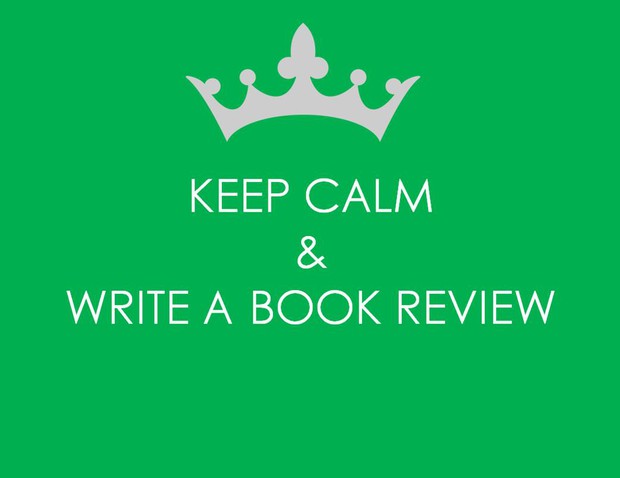 Did you enjoy this book? Let everyone know-- Here's how you can do just that!

Useful Tips from Canadian author, Elma Schemenauer, regarding writing reviews, using her book as an example:

"Suppose you read a book you like & want to post a review online. (You'd be doing the author a big favour; reviews help sales!) Your review can be very short. Example: "I enjoyed this. It's one of the most intriguing mysteries I've read in a long time." Or your review can be longer.

Once you know what you want to say, how do you post your review online? Following are three ways. In each case, I give a link to my 1940s novel Consider the Sunflowers--as an example & because I'd be thrilled if you reviewed it :)

Amazon.ca
Important: Before you can post a review, you must have spent at least $50 on Amazon.ca using a valid credit or debit card in the past 12 months. Promotional discounts don't qualify towards the $50 minimum. You don't need to have purchased the product you're reviewing. There's a 48-hour waiting period after your first physical order has been completely shipped, or your digital item has been purchased, before you'll be able to submit your review. If you've purchased a digital gift for someone else, the 48-hour waiting period doesn't begin until the gift has been redeemed.

1. Go to the product detail page for the item on Amazon.ca. http://tinyurl.com/hrcr39
2. Click Write a customer review in the Customer Reviews section.
3. Rate the item and write your review.
4. Click Submit.

Amazon.com [Use this if you live in the USA.]
Same guidelines as for Amazon.ca.
Product detail page for Consider the Sunflowers is http://tinyurl.com/z9bmupk"

EASY & FREE way to give reviews- submit your review by sending it to info@mennonitemuseum.org so it can be added to the bookstore section on our website! 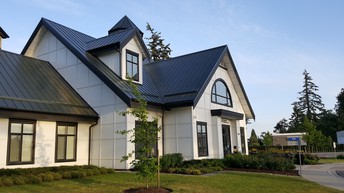 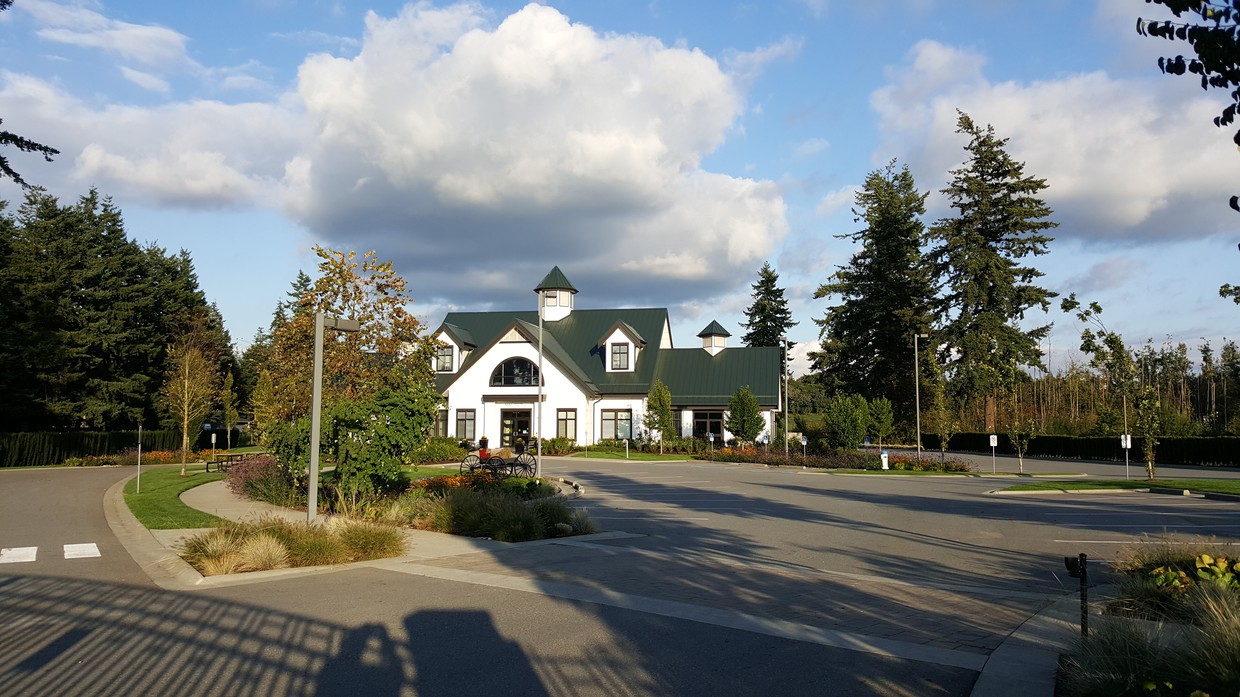 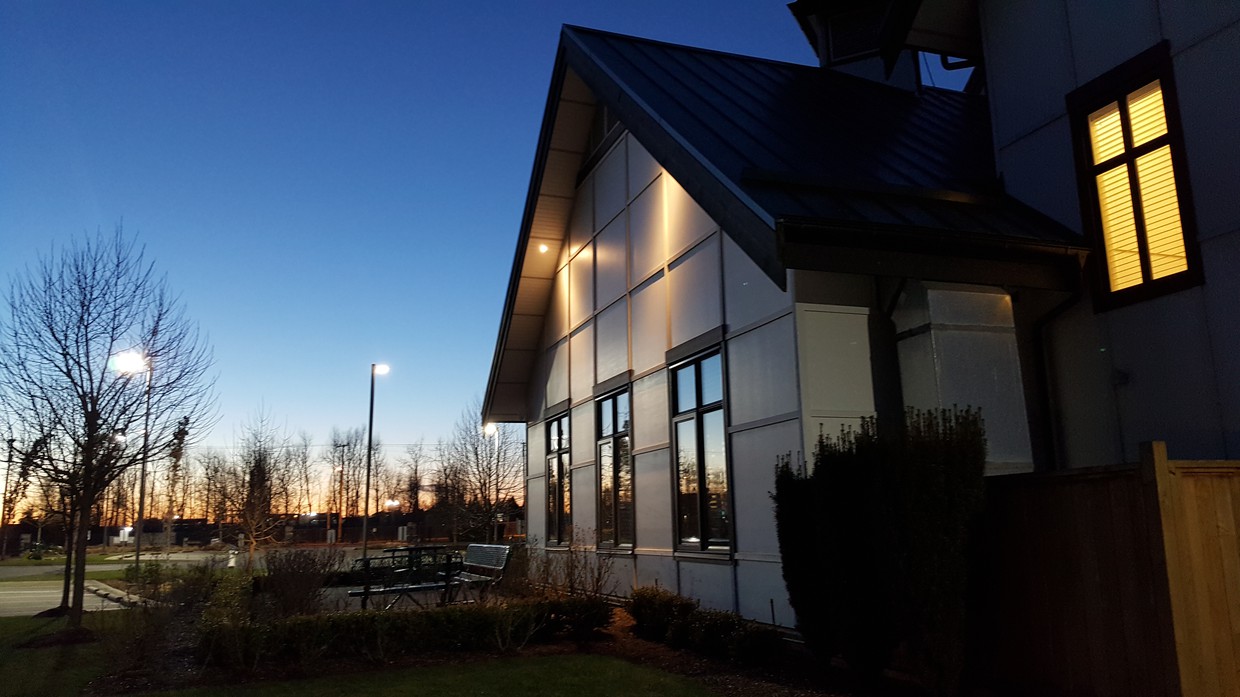 Follow Jennifer Martens
Contact Jennifer Martens
Embed code is for website/blog and not email. To embed your newsletter in a Mass Notification System, click HERE to see how or reach out to support@smore.com
close