lachie is using Smore newsletters to spread the word online.

Get email updates from lachie: 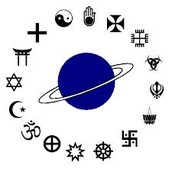 Religious beliefs- The thought that there is an ultimate reality after life. It is also what the religion holds sacred or important

Religious Experience- There are two kinds of religious experience. Direct, Where you have a direct vision or similar experience, and mediated, which is when a group experiences it, eg. going to church.

Sacred Stories- The catholic church has the many stories in the old testament, whereas the buddhists have many stories of peace, harmony and sacrafice.

Religious Beliefs- The catholic religion believes in God the father, God the son, and God the Holy Spirit. The buddhists, however, believe in reincarnation and the path to enlightenment. They believe that the better you are in life, the better your reincarnation will be.

Religious Experience- In the catholic church you can go to a church to have a religious experience with other people, whereas the buddhists don't even have to leave their home because they often have shrines in their home and they also meditate.

Religious Ritual- The catholic church has many, many rituals such as the way that everyone comes up to receive communion, also the many events throughout the year such as Christmas, Easter. The Buddhists live life as a ritual, everything they do is a ritual to get to enlightenment.

Social Structure- The catholic church has many events throughout the year including Easter, Christmas and Good Friday. The Buddhists have Vesak (Buddah's Birthday), Songkran (A festival that goes on for several days) and many others, but it depends on which denomination of the Buddhist religion you are as to what events you celebrate.

Sacred Symbols- The catholic church has many symbols such as a dove for peace and also a flame symbolises Jesus. The buddhist religion also has many symbols, such as an eight spoked wheel to symbolise the cycle of life and reincarnation and also the eightfold path. There is also the Buddah Eyes which look out in four directions on buddhist shrines to represent the all seeing of Buddah.

The Ecumenical Movement is a mission aimed at uniting all of the christian religions that started in 1910. In 1948 the World Council Of Churches was constituted, but the catholic religion did not join because it looked like they were trying to find the "True Religion". Since this the World Council Of Churches has organised many events aimed at uniting the christian churches together.

lachie is using Smore newsletters to spread the word online.