American Legand From The Old West

American Legand From The Old West 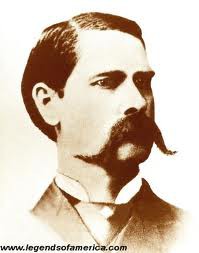 "Although [he is] one of the most famous law men of the American west -best remembered for his role in the shoot-out at the O.K Corral" ("Wyatt Earp").

Wyatt Earp is an American legend from the old west. He is famous for his dedication to enforcing peace at a time when gunslingers caused great trouble. Earp is most remembered for the shootout at the O.K coral. The O.K coral was located in Tombstone, Arizona in 1881. Later in his life he was a sheriff in Wichita, Kansas from 1875-1876. He was involved in a fight which included Billie and Ike Clanton, Tom and Frank Melowery, and lastly Billy Claiborne. Against Wyatt Earp and Doc Holidays. Even though the other team which are the cowboys had more people doesn&apos;t mean they had won because they hadn&apos;t Wyatt Earp and Doc Holidays won. To this day Wyatt has been branded as both a hero and killer ("Wyatt Earp").

wyatt earp as a young boy with his mother

Who was Wyatt Earp?