One of the funniest writer's in the world

One of the funniest writer's in the world 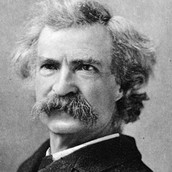 Mark Twain was born on November 30, 1835 in Florida, Missouri. His real name is Samuel Langhorne Clemens. He had 4 brothers named Henry, Orion, Benjamin, and Pleasant Clemens. He also had 2 sisters named Pamela and Margaret Clemens. His dad had slaves, but Sam hated slavery in fact he was in the Civil War for the Union. Sam spent most of his life in Hannibal, MO he moved there when he was 4 and moved away when he was 17. When Sam was little he dreamed to be a riverboat pilot, and from 1857-1859 he became a licensed riverboat pilot. Sam got his name Mark Twain from a boat term. Mark Twain means it’s deep enough to drive a boat. Mark Twain got married in 1870 to Olivia Langdon. His children were Langdon, Susy, Clara, and Jean. Mark Twain had a heart attack and died on April 21st, 1910. 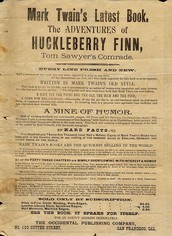 The Life of Becoming a Writer

Mark Twain was known for writing funny stories. When he was 12 his dad died so his family needed to get money, so he quit school and became a newspaper publisher. People Loved his writing and wanted more so he became a writer. Mark Twain’s first book was, “The Innocents Abroad” it was published in 1869. In 1876 he published his most famous book, “The Adventures of Tom Sawyer.” Since his fans loved it he started writing a sequel called “The Adventures of Huckleberry Finn.” In all, he wrote 28 different stories.

Mark Twain was a troublemaker. One night he went to skate on the ice with a friend, as he was skating, the ice started breaking and his friend fell in. Sam’s friend got sick but he didn’t die. Sam even called himself trouble in a sign he wrote, “Doors open at 7 ½, the trouble will begin at 8. He also was very funny, Sam’s stories were unique because they had lots of humor in them. People even said he was the most funniest man alive.