Perryton Junior High's vision is to educate children to the best of our ability so that all of our students can reach the highest level of their potential. We believe that education is a shared responsibility of the student, home, school, and community. In order to facilitate community and parent involvement in our school, this newsletter is a calendar of the many opportunities you have to cheer on and interact with our administrators, teachers, and students. We can't wait to see you around our events and campus! 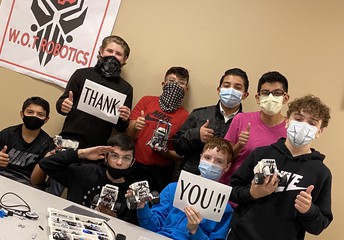 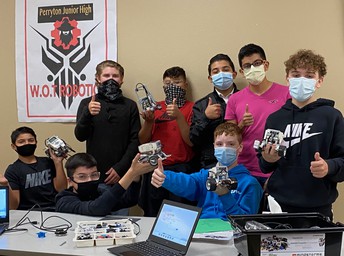 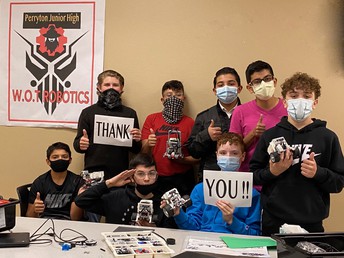 Perryton Junior High launched a new Robotics program for the 2020-21 school year and several key donations have catapulted the program into high gear with state of the art equipment on its way. On Monday, September 28th, Zeb Talley with Phillips 66 in Tulsa announced a $5278 Phillps 66 Philantrophy donation to the junior high’s robotic team, WOT Robotics.

Earlier in the year the class had a team name and logo competition and selected WOT Robotics, an acronym for Wizards of Technology. The 8 boys on the team can be found most days during their lunch periods, between classes of after school in the Robotics lab working after class on their projects.

“Our school and our team are so thankful and appreciative of the Phillips gift,” said PJH Robotics teacher and coach Sandy Woods. “We started the new without a budget and without the EV3’s and this donation is putting new robots in the hands of every team member, as well as making it possible to have more robotic equipment for use in PJH Technolgoy Applications classes. It is a dream come true!”

In addition, last week four new EV3’s were loaned to the WOT team for the current school year by the Liberal Air Musuem. “The Air Museum has a long standing tradition of leading area robotics competitions, mentoring new programs and offering summer camps for youth interested in robotics,” said Woods. “They have been a huge help to us, and through a scholarship program there we were able to have our First Lego League 2020-21 competition registration and kit fees paid.”

Also on September 28th Norma Green, Public Relations Representative for PTCI in Guymon announced a $250 donation to WOT RObotics to help buy hats for their upcoming robotics competitions. The team will be competing in the Texas Computer Education Association Robotics Contest in Feburary, and the First Lego League’s competition in the spring, starting on March 27th in Liberal, KS hosted by the Liberal Air Museum.

“We owe a big thank you too to Angela Eylar for her help in procurement of the Phillips 66 donation,” said Woods. “Her help was a blessing to our boys and our program.”

Get your Raider Yearbook!

Are you in sports? Choir? Band? Student Council? Cheer? Theater? Science? Math? ELA? Social Studies? LUNCH?! Then GUESS WHAT?! You will be in the Raider Yearbook!!! Grab your it right now so you don't forget!!!!

Every Friday is Hat Day! Take $.50 to the office before school or between classes on Friday to receive your stamp. No stamp, no hat!

Raider Tickets! How do they work?

This week's winners won a Front of the Lunch Line pass.The student and friend were allowed to cut to the front of the line for lunch! 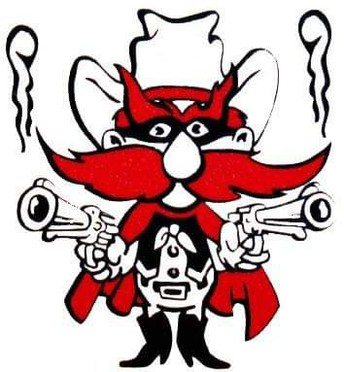