julianna is using Smore newsletters to spread the word online.

Get email updates from julianna:

Before I explain what I think Canada will be like in 2050, in terms of demography, immigration, Aboriginals, and challenges that might need to be faced.. I'm going to inform you on what Canada is like currently.

The current population of Canada is approximately 34.88 million people (2012). The population is continuing to increase. It has increased so much over the past decades that Canada’s population in 1861 is about a tenth of what it is today. The population growth is mainly caused because of immigration, considering how low the birth rates are getting. When Canada was at stage one in the demographic transition model, the birth rates were high because children were needed for farming and there was poor family planning. As time went on since then, until this day, it has been decreasing because medical care has been improving and now there’s better family planning. Today, birth rates are lower than it has ever been. Death rates haven’t been effective towards the population growth because the death rates are low as well, because of advanced health care and more food supply. This causes the natural increase rate to be stable. Below is a basic demographic transition model. We are currently at stage 4. 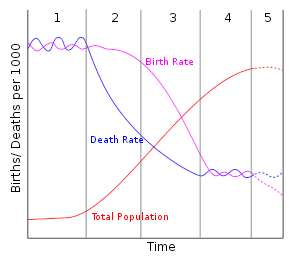 Currently the majority of the population in Canada ranges from 50-54 years old. The amount of babies being born are decreasing while the amount of seniors living longer is increasing. This is in comparison to decades ago when the elderly were dying earlier and more babies were given birth to. 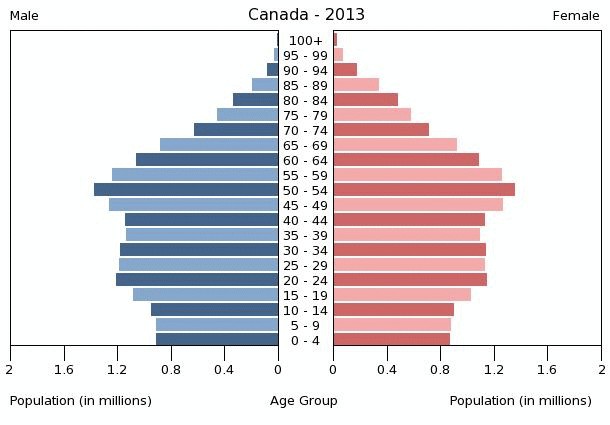 The culture and lifestyle of the Aboriginals is becoming more and more modernized. Over the past decades they have lost their native languages and now speak English as a first language. It’s very rare to find an aboriginal that speaks a native language because only one out of four of them do. Adding on, the younger generations of aboriginal people are moving away from their homes into more urban areas.

There are a lot of issues involving the aboriginals that have to do with them being denied of their rights and treated differently. For example, lower levels of education. Many people feel strongly about this situation and trying to cause a movement that expresses their belief that the aboriginal people deserve more rights and equality and that their culture should be respected.

Did you know that every ten years, the Canadian government welcomes 40,000 new immigrants? People from all over the world immigrate to Canada for many reasons, also known as “pull factors”. Canada has adequate health care and an advanced education system. We also have many job opportunities and a stable government. Those are all considered pull factors and that is why we attract so many immigrants. There are three main types of people who immigrate to Canada, which are: refugees, family class immigrants and economic class immigrants, and altogether they make up one sixth of our population. People immigrating to Canada are causing the population to grow rapidly. The population has never been so high. The graphs below show some fairly recent immigration distribution to the provinces of Canada. 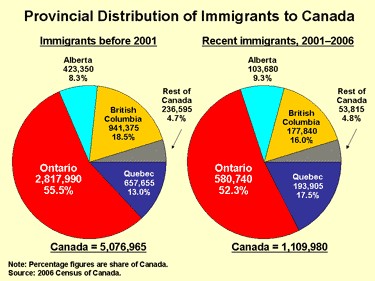 Population Growth and Immigration in 2050

I think that by 2050 the population will decrease because Canada will reach stage five on the demographic transition model. Stage five means that the birth rate will be even lower than it is now and so will the death rate which will cause a dramatic drop in the natural increase. The world is constantly advancing so money is becoming more important to people, and so is saving it. I think by then, the teenagers of today won’t have as many children as they grew up with because they would want to spend money on themselves. I also think that there will be less people immigrating to Canada because by then other countries should be more developed than they are now and hopefully safer, which will decrease the amount of refugees coming into Canada.

Aging of Population in 2050

The population in Canada is slowly beginning to get older due to the lower fertility rate and longer life expectancy. People are living longer nowadays because of the advanced health care and medical knowledge that scientists and doctors are constantly learning. Unlike many years ago, when the population pyramid for Canada showed that the majority of citizens were younger, and the elderly were dying faster. From 1956-2006 the median age of Canada’s population was about 27 years to 38 years old. I think by 2050 it'll be around 50 years old. It was only in 2006 when the fertility rate dropped and the life expectancy increased.

Aboriginals of Canada in 2050

With people like Maurine Karagianis, I think the future for aboriginals looks positive. Giving aboriginals their rights will eliminate the issues they have had to face. However, the fact that the aboriginals are already beginning to modernize by moving to urban areas and losing their native languages proves that even though the history may still be there, the lifestyle of the aboriginals will eventually be more like ours. The world is moving forward and so they will have to move along as well in one way or another.

In conclusion I think that in 2050 the population of Canada will decrease and so will immigration rates. Countries will be more developed and safer for their people to live in so not as many refugees or family class immigrants will come to Canada. The population of Canada will have longer lives because of constantly improving health care and less people will have children in order to save money/spend money on other things. The lifestyle of aboriginals will be modernized and more similar to ours and they will be given more rights since people are speaking up. I’m looking forward to a brighter and technological advanced future.

julianna is using Smore newsletters to spread the word online.