Get email updates from michael:

What's in your computer?

What's in your computer?

Components on a motherboard 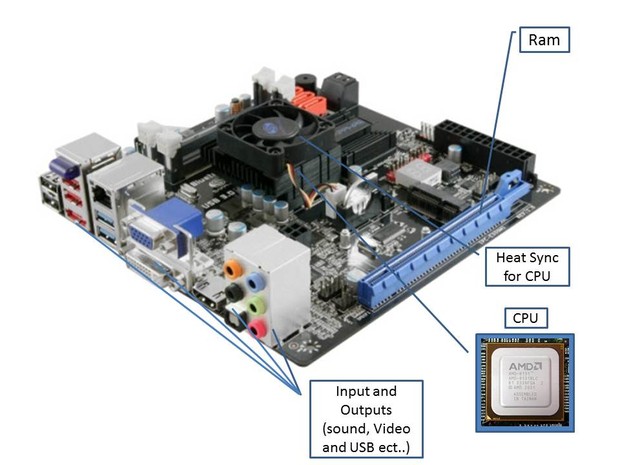 The CPU is essential in a computer. CPU stands for Central processing unit.

Some more expensive CPU’s come with a heat sync, also you can buy them. A heat sync is like a fan to cool your CPU.

A CPU has about 204 pins to connect to the motherboard. You must select the appropriate motherboard for your CPU.

RAM is a fast type of memory in which programs, applications and data are stored. RAM is temporary.

Here are some examples of what's stored in RAM:

If a computer loses power, all data stored in its RAM is lost.

ROM means (read only memory). It means that it stores all the tasks what you have done. It also contains the boot firmware. For example, ROM stores the instructions for the computer to start up when it is turned on again. A ROM is non-removable.

Hard disks spin at very high speeds (around 7,200 RPM - revolutions per minute) within a sealed unit inside the computer.

The data stored on a hard disk is retained until deleted, but it needs to be loaded into main store RAM before it can be used.

Follow michael semple
Contact michael semple
Embed code is for website/blog and not email. To embed your newsletter in a Mass Notification System, click HERE to see how or reach out to support@smore.com
close