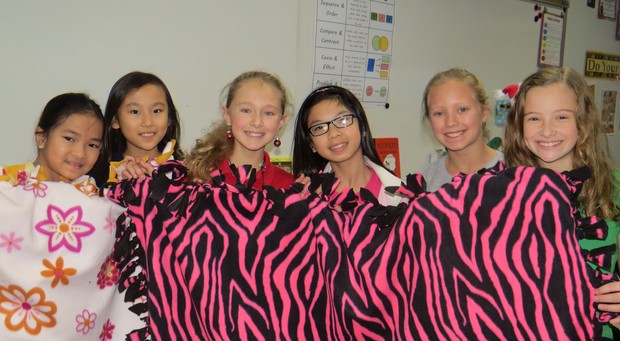 Team Purdue 5th graders wanted to spread some joy to the children at Texas Children's Hospital in December, so they made cheerful, warm fleece tie-blankets as a service project during their Christmas party. Caring for others and making a positive difference. It's never too early to start! 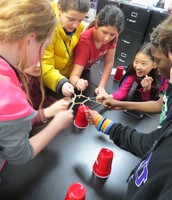 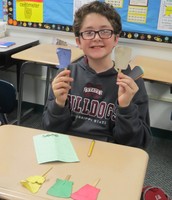 As students prepare to be part of our global society, they must not only learn the core subjects of math, science, reading, writing and social studies, but must also be skilled in the "Four C's": Critical Thinking, Creativity, Communication, and Collaboration. GT Academy teachers integrate these skills into many of their lessons, and in January, we focused specifically on collaboration. Students rotated through eight lessons on Group Dynamics to better understand how to effectively work in group situations. They learned about what type of thinking each color of DeBono's Thinking Hats represents, ways to manage conflict within a group, the benefits of study buddies and the importance of asking for help. They put their problem solving skills to work to creatively stack cups, and learned to find similarities of group members while respecting differences.

The skills learned through the Group Dynamics rotations will certainly help students as they embark on the semester long Texas Performance Standard Projects (TPSP). Fifth grade students are finishing up research and will soon begin writing the research paper and planning their quilt. Sixth grade students are researching and will work together to plan an exciting journey. They will track their budget and record travels on their website, and then create a game and design a display. Both projects will not only take collaboration skills, but time management and GRIT!

Throughout the TPSP, students are using the Independent Investigation Method (IIM). This method helps walk students through each step of the research process and keeps them organized and on track through the process. For more information on IIM, click here:

The GTAB Spaghetti Dinner was a success! GTA families and teachers came together to enjoy a night of fun. We were entertained by the PJHW band, PJHW choir, Sablatura's Glee Club, and even a few Karaoke singers! It was fun to bid on the great baskets and "teacher treats." In fact, several fifth grade students have already cashed in their treat. They were recently seen cheering in the stands at a Pearland High School basketball game with their teachers. Thank you to all who came out to support the GT Academy. Our students will benefit because of your generosity.

Math Club: Four students from Sablatura recently partnered with students from PJHW to compete in a Math Counts competition held in Sugar Land. Amber received a 6th place trophy while Jayden received a 4th place trophy. Our math club team is looking forward toward to the upcoming qualifying meets for TMSCA state.

FPS: We have six teams who won at the district level, which means their global issues problem solving booklets will now be sent to state judges. The state Future Problem Solving topic is "The Global Workplace." Teams are diligently working to prepare for this competition. Stay tuned!

Seaperch: All five Seaperch teams attended a practice meet at Manvel High School in preparation for the regional meet in Georgetown on February 20th. These students have been putting in lots of hours working together to prepare for interviews, maneuver their ROVs through an obstacle course, and create a professional poster. Good Luck Seaperch Teams!

NXT: On January 30th our four NXT Robotics teams represented Pearland ISD well as they competed in the TCEA competition at Fairmont Jr. High. The Turtle Lawnmowers came in seventh, the Scorpion came in third, and the Asian Bots came in second out of seventy seven teams from Friendswood, Deer Park and Houston area schools. The Asian Bots will represent Sablatura Robotics at the state competition in April.

Mars Rover: After learning about Mars and its rovers in a mini course, six teams competed in the Mars Rover Celebration at the University of Houston on January 30th. Two of our students made the evening news! Next time you pass by our Sablatura trophy case, take a look at the cool star trophies four of our teams brought home.

Take a look at the Animoto video below to see Sablatura STEM in action! 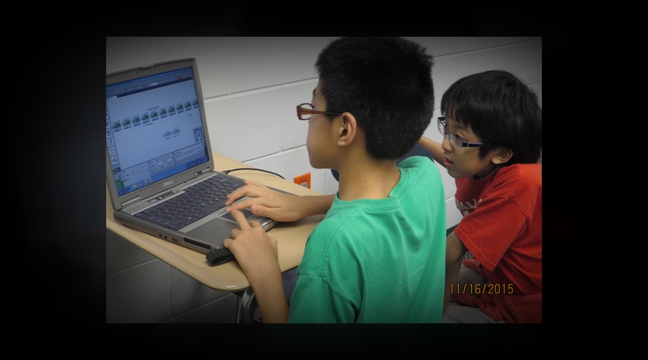 animoto.com
Sablatura students get hands on experience with STEM through NXT Robotics, Mars Rover, and Seaperch.

Learning About Gifted From Ian Byrd

In case you have not yet discovered Ian Byrd, take a look at some of the links below. He writes about gifted education on byrdseed.com and is one of my favorites to follow.

So Much More Than Smart Kids:

We Only Get Stronger When It's Difficult:

Texas Association for the Gifted & Talented

2201 N Galveston Ave, Pearland, TX, United States muellers@pearlandisd.org 281-412-1500 www2.pearlandisd.org/LeonSablatura.cfm?subpage=64927
Embed code is for website/blog and not email. To embed your newsletter in a Mass Notification System, click HERE to see how or reach out to support@smore.com
close
Powered by Smore
Powered by Smore