Get email updates from jessica:

How did the Roman Catholic Church unify Europe, politically and socially, after the fall of Rome?

The Roman Catholic Church played a main part in unifying Europe after the fall of Rome. They became the main source of government and power as the people were left in a stranded chaos. They also managed to preserve some knowledge and history about the Empire.

How did the following events, both individually and collectively, contribute to the end of the Medieval Era in Europe?

The Great Schism- This set the two main churches against each other and eventually led to excommunication. This did not help the unity and helped split the people.

The Hundred Years War- This also began to split the people apart, choosing sides and fighting. The constant fighting and wars became natural to the people of the Roman Empire and it helped them fall. 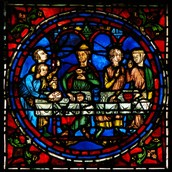 Explain the key elements of art and architecture in Medieval Europe

There are multiple key elements in the art and architecture of Medieval Europe. One of the key elements is Gothic Architecture. It has had many different lasting effects on architecture today such as cathedrals and castles. Also, the tall arches, the stain glass windows and the flying buttress are key. For art, the stain glass windows and illuminated scrolls were important because they told a biblical story. They allowed the people who did not have an education understand the stories and their religion.