Written and Illustrated by Yuyi Morales 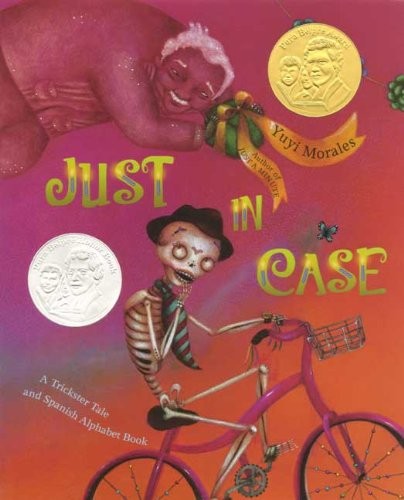 Senor Calavera, the skeleton from the Day of the Dead celebrations, is worried because he cannot figure out what to give Grandma Beetle for her birthday. Zelmiro the Ghost gives him the advice that, "The best present to give a friend is the thing she would love the most." Senor Calvera decides not to get her one gift, but one for every letter of the alphabet. He later finds out at the end that the best gift of all is seeing her friends.

Just In Case is a 2009 Bank Street - Best Children's Book of the Year, the winner of the 2009 Pura Belpre Medal for Illustration and a Pura Belpre Honor Book for Narrative.

The Pura Belpré Award, established in 1996, is presented annually to a Latino/Latina writer and illustrator whose work best portrays, affirms, and celebrates the Latino cultural experience in an outstanding work of literature for children and youth

Excerpt from Just in Case

I have created a Voice Thread of me reading the first few pages of the story. Follow the link to hear a part of this wonderful story.

Determine a theme of a story, drama, or poem from details in the text;

Research to Build and Present Knowledge

Conduct short research projects that build knowledge through investigation of

different aspects of a topic.

The students will be able to….

- Determine the theme of Just in Case.

-The large moral outcome I want students to gain from Just in Case is that the presence of friends and friendship is more important to someone than gifts. I think this is great for children to learn, especially in this day and age where video games and technology seem to be taking over.

-The Spanish aspect of this book can be a simple way to attract the attention of those students with Spanish backgrounds. Allowing their culture to be represented in the classroom is very important.

-A fun way to use this story in the class is to have the students write their own alphabet book using a different language. It would be important for them to also include a moral or theme for their book, rather than just translating words. Doing so would broaden their understanding of culture and language, while also presenting positive morals.

About the Author/ Illustrator

Yuyi Morales was born in Xalapa, Mexico, the city of flowers and springs. Drawing became her passion in her early years. As a teenager, Yuyi and her sister were competitive swimmers and she eventually attended college to become a Physical Education teacher. She worked as a swimming coach until 1994, when she immigrated to the US with her fiance and their newborn son. The public libraries soon became her solace due to her struggle to learn English. Yuyi brought her son along and practiced English by reading children's books. This piqued her interest in stories and she was soon taking classes on the subject. Drawing and painting then soon found its way back into her everyday life.

She began her professional career as an illustrator. In 2003 her illustrations for Harvesting Hope, the Story of Cesar Chavez (written by Kathleen Krull), skyrocketed to the top of best-books-of-the-year lists, and earned her an ALSC Pura Belpre Honor, as well as a Christopher and Jane Adams award. Morales later began writing and illustrating her own children books.

Follow Kara Douglas
Contact Kara Douglas
Embed code is for website/blog and not email. To embed your newsletter in a Mass Notification System, click HERE to see how or reach out to support@smore.com
close