JULIAN is using Smore newsletters to spread the word online.

Get email updates from JULIAN:

First Do you know Isaac Newton.?,Issac Newton was born in on December 25, 1643.He was great machination and scientist. He went to Trinity College.Also got his Bachelor and Master degree Issac Newton lived for 85 year died in 1727.

Do you know Issac Newton was? His First, law is Inertia.First, an object at rest will remain at rest unless acted on by an balanced force.An object in motion container in motion with same diction unless act upon by an unbalance force the law is often called inertia. 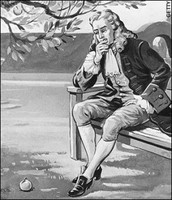 Newton second law talk about acceleration and mass.To begin with The second, law Acceleration is produced when force act on a mass. Next, a mount of force needed (to accelerate the object. require more force to more same distance as height object.

The third law talk about having an action and a reaction.First, for every action there is an another the anther one will chance to oppisted direction.In conclusion Issac newton was famous for discovering mass action and reaction He was the greatest scientist.

JULIAN is using Smore newsletters to spread the word online.