At the time of birth Elizabeth would someday would become queen of Great Britain. Her father and mother, also known as the Duke and Duchess of York,there family´s home on the grounds of Windsor Great Park. Elizabeth an her younger sister Margaret were educated at home by tutors. Their studies included french,mathematics,history and geography. They also took dancing,singing and art lesson. In 1936, the course of Elizabeth´s life changed with the death of her grandfather,King George V. Her uncle became King Edward VIII,but he only ruled for six month.

At the beginning of the World War II, Elizabeth an her sister stayed out of London spending much of their time at Winsor Castle. From there, she made one of her most famous broadcasts. Over the radio,Elizabeth tried to reassure children who had been evacuated from their homes and families.In 1945,Elizabeth joined the Auxiliary Territorial Service to help in the war effort.

Princess Elizabeth and Philip were married at 11:30 on 20 November 1947 at Westminster Abbey 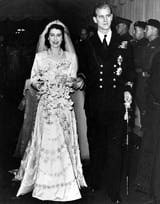 The crown is very BIG

Elizabeth when she was young

The King and the Queen

This are the Kings of English