Get email updates from devin:

The consequence of Demeter's actions were that nothing grew or prospered, the cattle died, there was too much sun and rain. It seamed mankind would die of hunger. So Zeus sent Hermes to go to the underworld and bring Persephone back up.

Humankind suffered because of Demeter because she killed every plant, and beacuse of that the cattle died, also she made it to hot and rainy for anything to grow, so lots of people died because of her.

The myth suggests that one person's actions can hurt or even destroy a whole community, so that's why a community needs to work together even on the smallest things.

(a) Was the Emperor’s decision at the legend’s beginning better for the individual or the community?

It is better for the community because the people don't have to change and adapt to a new ruler, laws, and way of life. 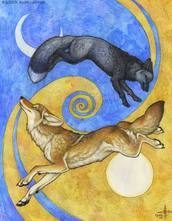 Coyote's ignorance harms others by making winter, and the people on earth are not ready for it so they may die of the cold.

I think the eagle bears more of the blame because he was the one who let coyote carry the box and eagle let coyote out of his sight when they stopped.

This folk tale implies that all the individuals have to work together to reach a goal, and that one individual can ruin the community's plan.