"All the Paws-itive News Fit to Print"

"All the Paws-itive News Fit to Print"

Welcome to The Paw Print, a newsletter written, operated and printed by the Lincroft School Journalism Club. The Paw Print focuses on big events that happen during school, like the Halloween parade and much more. We also do interviews, like asking teachers what they did over fall break and what they think about school activities. We plan to print our newsletter every other month.

The Latest and Greatest at Lincroft School 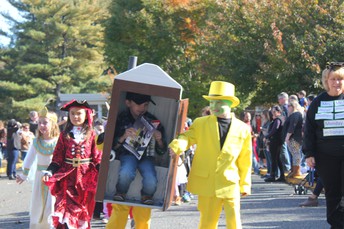 On October 31, the day we all know as Halloween, Lincroft Elementary School hosted a Halloween parade. Mr. I., the principal, and all the teachers led the kids around the school. Parents and siblings gathered around to see their children/siblings. Cameras flashed as parents tried to snap photos of their kids.

"Smile!" parents shouted, trying hard to get children's attention. Music such as "The Monster Mash" and "This is Halloween" filled the air.

The children had different and unique costumes. The lower grades had princesses and superheroes, like Superman, Batman, Elsa, and Belle. The higher grades had costumes like vampires, killer clowns, and blow-up dinosaurs. One kid, 4th grader Liam McGrath, was even a hot air balloon!

During the parade, the staff tried hard at the challenging job of keeping all the students in the right line. After a full lap around the school, Mr. I. led everyone back inside to finish the rest of the day.

What did you think of the Lincroft Halloween parade? 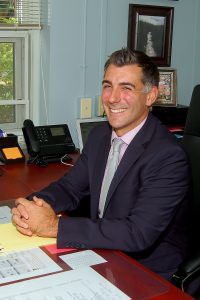 Mr. Imbimbo in the Spotlight

Have you ever thought what it´s like to be a principal? Now, all your questions will be answered. Get ready to run through the mind of your very own principal, Mr.Imbimbo. You will learn about his job, his family, his opinions, and much more! These are the things Mr.Imbimbo told us during an all-access interview. Click the link at the bottom to watch the interview in full.

The answers you have been waiting for...

To start, Mr. Imbimbo’s favorite thing about being a principal is that he “gets to work with students, teachers, and parents.” He used to teach second, third, and fourth grade. Then he was an A.T. teacher. After that, he was a technology specialist at River Plaza and here at Lincroft. Finally, he became a principal for Bay View school, then, Lincroft school. Mr. Imbimbo had to do a lot of school work, get his master's degree, pass a hard test, and go on a lot of job interviews to get to be our principal! He said that he chose to be our principal because he loves our school and all the people in Middletown. Mr. Imbimbo also said that when he is not working he loves to take nature walks with his family, go to the beach and spend time outdoors. Mr. Imbimbo said being our principal is a very hard job, but it is very rewarding!

At the end of our interview, Mr. Imbimbo said that all his future plans for Lincroft School will come from the students and staff. He said, "I think that we have to leave it up to the kids." If you have any Ideas, contact Sheila Vargas-Makrinos at Sheila.Makrinos@icloud.com. We will be happy to pass any ideas to the office and our principal. Thank you so much for reading our article. We all hope you learned something new about your very own principal, Mr. Imbimbo.

At the Movies with Avery Velho

You are a bad one, Mr. Grinch!

I am a fan of Dr. Seuss movies; they are a blast of nostalgia for me. Since all the Dr. Seuss adaptions have been horrendous, I was hesitant to waste my money. But I watched it and...

I wasted my money. The Grinch is more like a tsundere (Japanese for a person who is initially cold before gradually transforming into a warmer, friendlier version) than the GRINCH!?! The music is by Pharrell Williams who raps. Oh, joy. The voice acting is ok, except for Cindy Lou because for some reason I just found her voice grating past the 30-minute span.

We already have our dog-abusing, crude, despicable version but this?! Ugh. I recommend other holiday movies like Elf, The Miracle on 34th Street, Scrooged, The Bishop's Wife, and Home Alone. if I had to rate it, I would give it a 2... no more, no less. 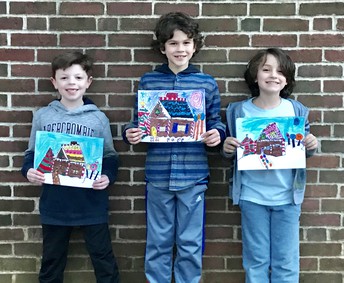 Have you ever wanted to try something that you've never done before? Well, then our after-school clubs might be for you! Here's a rundown of our fall clubs---check for new ones coming soon!

Every Monday after school, girls and boys meet up in Room 7 to enjoy an hour of journalism! In the first few minutes of this club, kids have a snack. Then after that, club leaders explain what will be done in that session. They show examples of already-written articles so you can see the expectations. Kids will be writing and publishing fun newsletters for the whole school to read and enjoy. Journalism Club will run year-round.

For those not interested in Journalism Club, U.S. Black Belt NJ offered Tae Kwon Do. Tae Kwon Do is martial arts, and you can try out for a whole bunch of different belts that you can earn. Jordyn Tockerman, a kindergartner said, "The best part about Tae Kwon Do is the axe kicks. It isn't too hard to learn." On December 8 at 12:30 p.m. U.S. Black Belt had a belt promotion test for these students and everyone earned their white belts.

Have you ever wondered what it's like to be an artist? Well, students in grades K-4 tested their skills in this fall's KIDZART after-school club. Artists Tresse DeLorenzo and Lisa Walker taught kids to use a variety of markers, watercolors and oil pastels to create many unique pictures. The club's creations included Halloween House, Cacti, Cornucopia and Tree at Sunset. According to Nicholas Blasucci, KIDZART is great because "You end up drawing things you didn't know you could draw." He also said, "The teachers are good artists and very nice." When I went to observe the class, I saw they were more free-willed than Tae Kwon Do. As you can see, KIDZART is an awesome, fun and cool experience for kids. 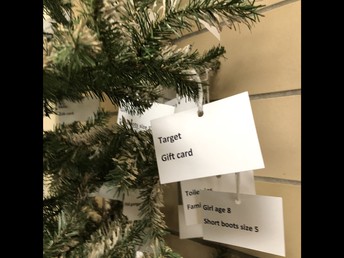 Lincroft School loves to help, so once again we put up our holiday Giving Tree in the hallway. This year's event made the season brighter for five local families (including 14 children) in need. We collected clothes, toys, games, shoes and gift cards.

We interviewed Mrs. Sheila Vargas Makrinos, the coordinator of the Giving Tree, for some history. She explained that the event began after Hurricane Sandy in 2011. Many families were devastated by the storm, and the Lincroft Elementary School community jumped right in to assist.

On December 12, gifts were delivered in beautiful gift bags. The generosity of Lincroft School is always amazing!

What do you do if you try to join a game during recess and someone yells, "No joiners!"

It's always better to be kind. Check out the short film Lou for this edition's paws-itive message. 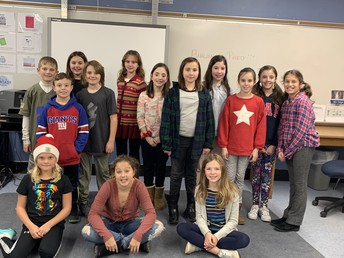