Donatello was the greatest sculptor before Michelangelo. He had a great influence on the artistic aspect of the 15th century in Italy. Donatello lived most of his life in Florence Italy. At age seventeen he took up a job as an apprentice for Ghiberti he was a master on the bronze reliefs of the First doors or the Baptistery. Donatello lived a lonely life he never married and had very few people who cared or liked him. Donatello created sculptures such as the statue of david and the singing gallery which is a carving. A man known as the godfather of the renaissance, Cosimo Medici, was Donatello's patron. 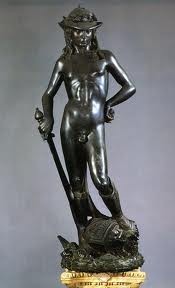 The name of this piece is the "Statue of David". This piece was created in 1408. This piece is significant because it was placed in the center of Florence and remained there for many years. This piece used the technique of sculpting bronze which was relatively new back then. I find this piece interesting because it still stands today in a museum in Florence. This statue represents humanism because the statue is a human standing by himself.