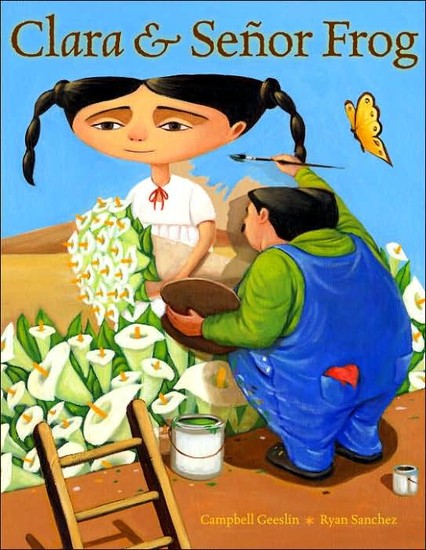 Campbell Geeslin published his first book shortly before his retirement from the world of print journalism, where he had worked for more than three decades as a reporter and editor. Although Geeslin and his family were centered for many years in and around New York City, the author retains vivid memories of his youth in rural west Texas in the 1930s, and the vacations he and his family took to an even more exotic locale—across the border into Mexico. Geeslin draws on his familiarity with the Texas-Mexico border area in his writing, which includes picture books
biography.jrank.org/pages/1796/Geeslin-Campbell-1925.html

Ryan Sanchez is an artist, illustrator, and educator. He was raised in the suburbs of Los Angeles, California. To keep himself entertained as a child, he drew on sidewalks, streets, walls, shoes, clothing, textbooks, and anything else he could get his hands on.

Luckily, he did not grow out of his passion for the art. Ryan went on to college and earned a BA in Fine Arts from the University of Southern California in 1995, and a BFA in Illustration from Art Center College of Design in 2000.

In 2002, he moved to New York to build on his street cred. Since then, his illustrations have widely been used in the editorial, advertising, and publishing world and have been recognized by Communication Arts, 3 X 3 Magazine, American Illustration, and the Society of Illustrators.

After 5 years of grinding the pavements of the Big Apple, he quickly rose to through the ranks. During this time, his paintings have been shown in galleries in New York, Los Angeles, San Francisco, Chicago, Seattle, Portland, London, Canada, and Switzerland. In 2007, Schwartz and Wade Books published Ryan’s first illustrated children’s book, Clara and Senor Frog, written by Campbell Geeslin. Later that year, he decided to slow things down...REALLY slow things down, and moved to the South.

Introduction to the book

Clara is a little Mexican girl being raised by a single mother, who works as a magician’s assistant. Clara is accustomed to seeing magic in her life, but when her mother starts dating Miguel, who is a famous artist, Clara’s world begins to change. At first, she thinks the man is funny and wants to call him Senor Frog because of his looks. Now, let us remember here, that Clara, too, has a funny body type – her head is shaped like the lower half of a big circle! However, Miguel turns out to be a kind, gentle man who sees beauty everywhere and tries to capture what he sees in his art.

Soon, her mother falls in love with him, and they are married in his studio. The wedding is well-attended by their friends including El Mago the magician, a funny wrinkle-faced man with hair brushed over his balding head and very big teeth. Miguel and Clara bond while he teaches her about art, and Clara becomes enthralled with the magic of creative art. She poses for her stepfather, as does her mother, and he paints them in their finery along with imaginary flowers, birds and whatever else he envisions.

VoiceThread - Conversations in the cloud

Everything from the characters names to the way they are illustrated are culturally correct. The characters were created Hispanic. Their names are common hispanic names like Mia, Clara, and Senor. The way that they are shown in the illustrations is with brown skin and dark hair. None of the characters have light colored hair or eyes. The clothing they wear also seems to reflect the culture well. The men in the book always have on long sleeves even though it appears to be warm out, and the women wear dresses.

The settings seem to fit extremely well with the Hispanic culture. The houses are mostly white with red roofs and curved arch ways. The other buildings in the illustrations are colorful. They refer to the shops as markets, and the labels on buildings are in Spanish. There are brick walk ways, and murals everywhere. It is also a very warm climate which was captured so well in this book.

This book does a fantastic job of sneaking in Spanish as a second language. It is mostly written in English, however the names of the characters, the places the go to, and a few other words are written in Spanish. The words are correctly used in the sentences. It flows so well that the first time I read through this book I didn't notice that I read some words in Spanish.

Grade: Second
Standard: RL.2.1–Ask and answer such questions as who, what, where, when, why, and how to demonstrate understanding of key details in a text.
Objective: The students will be able to identify the characters, setting, and details of what happens in the story.

Standard: RL.2.7- Use information gained from the illustrations and words in a print or digital text to demonstrate understanding of its characters, setting, or plot.
Objective: The students will be able to describe the personality of the main character using pictures or words from the book.

Q:How will I connect this book to the lives of my students someday?
A:This book would be great in teaching creativity and imagination, but it is also an incredible book to read if you have students who have had parents remarry. It would even be good for students who are about to go through that or who even have the possibility of that happened in their family life. I think talking about Clara and her emotions through this experience would be a healthy way for students to in a way talk through those emotions they may be feeling through the character.
Q:How will I model or explain what I want them to learn?
A:I could have them practice observation skills by writing down something they're wearing or doing that shows an emotion or personality trait. I could also have them practice this with me or other students. Making sure to note facial expressions, clothing, body posture, and the things we say. This way the students will be ready to analyze and understand the characters in the book.
Q:How will I have them apply this?
A:I would have them write down this personality traits and emotions of Clara, Senor Frog, Mama, or Tia Mia.

Follow Olivia Tolson
Contact Olivia Tolson
Embed code is for website/blog and not email. To embed your newsletter in a Mass Notification System, click HERE to see how or reach out to support@smore.com
close