Donate to an education fund of a child who's lost a parent.

Donate to an education fund of a child who's lost a parent. 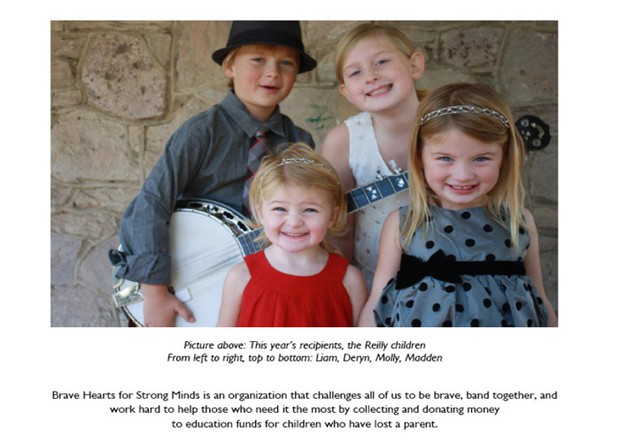 Brave Hearts for Strong Minds was started for one of the “bravest hearts” out there, Tom Reilly. Tom was an incredibly hard worker, successful businessman, world class musician, and above all he loved his family. There wasn’t a day that you would see Tom where he didn’t have a kid, hammer, a banjo in hand, or a joke to share to cheer you up.


In 2011, Tom passed away suddenly leaving behind his wife and four young children. He was a jack of all trades and someone who always worked hard which is why as a thank you to all Tom has shared with us over the years, we want to share back in his honor by donating all proceeds to education funds for families who have lost a parent. As those closest to him may know, he may not have been the biggest fan of school but he dedicated his life to his family, friends and even to complete strangers in need which is why we plan to carry on his legacy by helping those who need it the most.

Once the goal is reached for that family, we ask that they too become “brave hearts” that push for "strong minds" by helping to organize and choose the next event and recipient. Tom Reilly was a man for others which is why Brave Hearts for Strong Minds challenges all of us to work hard, band together, be brave, and help those who need it the most.

"Brave Hearts for Strong Minds is an Organization that Challenges all of us to be brave, band together, and work hard to help those who need it the most by collecting and donating money to education funds for children who have lost a parent."

Follow Olivia Blackton
Contact Olivia Blackton
Embed code is for website/blog and not email. To embed your newsletter in a Mass Notification System, click HERE to see how or reach out to support@smore.com
close