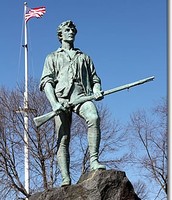 www.history.com
In April 1775, when British troops are sent to confiscate colonial weapons, they run into an untrained and angry militia. This ragtag army defeats 700 British soldiers and the surprise victory bolsters their confidence for the war ahead.