MTE MLK Assembly VIDEO presented by our 6th grade. Click on the WeVideo Link below to watch.

Today we had an assembly in honor of Martin Luther King Jr. Day on January 18th. This has always been one of my favorite holidays because my family and I pick a service project to do together. We do this because MLK day has become a day of service and activism. A day where people are asked to give back, work together and collectively move forward in a positive direction. These were all things that happened during the Civil Rights Movement and why there was systemic change that happened. It took many people working together to make the change that happened for people of color during the Civil Rights Movement. So, today I wanted to highlight some other important figures in the movement. People who worked behind the scenes, might not have been as well known as Dr. King, and those who may have worked on/in one specific area of the struggle.

A major force in shaping the development of the Civil Rights Movement in America, Ella Baker was the premiere behind-the-scenes organizer, co-founder of the Southern Christian Leadership Conference (SCLC) headed by Martin Luther King, Jr., and an inspiring force behind the creation of the Student Non-Violent Coordinating Committee (SNCC).

James Howard Meredith is an American civil rights movement figure, writer, political adviser, and Air Force veteran. In 1962, he became the first African-American student admitted to the previously segregated University of Mississippi, after the intervention of the federal government, an event that was a flashpoint in the civil rights movement. Inspired by President John F. Kennedy's inaugural address, Meredith decided to exercise his constitutional rights and apply to the University of Mississippi. His goal was to put pressure on the Kennedy administration to enforce civil rights for African Americans.

A master strategist and tireless activist, Bayard Rustin is best remembered as the organizer of the 1963 March on Washington, one of the largest nonviolent protests ever held in the United States. He brought Gandhi’s protest techniques to the American civil rights movement, and helped mold Martin Luther King, Jr. into an international symbol of peace and nonviolence.

Despite these achievements, Rustin was silenced, threatened, arrested, beaten, imprisoned and fired from important leadership positions, largely because he was an openly gay man in a fiercely homophobic era.

Everett McKinley Dirksen, became Republican leader in the House of Representatives in 1959, a post he held until his death in 1969. Dirksen's influence was most keenly felt during the debate over the Civil Rights Act of 1964. Declaring that racial integration was "an idea whose time has come," Dirksen supported cloture to end the filibuster and thereby allow for final passage of the bill. Dirksen's contemporaries deemed him "the most powerful member of the Senate."

A Philip Randolph was a labor leader and social activist. During World War I, Randolph tried to unionize African American shipyard workers and elevator operators, and co-launched a magazine designed to encourage demand for higher wages. He later founded the Brotherhood of Sleeping Car Porters, which by 1937 would become the first official African American labor union. In the 1940s, Randolph's abilities as an organizer had grown to such lengths that he became the driving force in ending racial discrimination in government defense factories and desegregating the armed forces, both done via presidential decree. Becoming involved in additional civil rights work, he was a principal organizer of the 1963 March on Washington.

James Farmer, American civil rights activist who, as a leader of the Congress of Racial Equality (CORE), helped shape the civil rights movement through his nonviolent activism and organizing of sit-ins and Freedom Rides, which broadened popular support for passage of the Civil Rights and Voting Rights acts in the mid-1960s.

John Lewis, American civil rights leader and politician best known for his chairmanship of the Student Nonviolent Coordinating Committee (SNCC) and for leading the march that was halted by police violence on the Edmund Pettus Bridge in Selma, Alabama, in 1965, a landmark event in the history of the civil rights movement that became known as “Bloody Sunday.”

Lewis entered elective office as an Atlanta city councilman in 1981 and in 1986 began representing a district that included Atlanta in the U.S. House of Representatives. He remained a member of congress until his death in 2020.

Ralph David Abernathy was an African-American pastor, civil rights leader, and closest associate to Martin Luther King Jr. during the civil rights movement that spanned from the 1950s through the 1960s. Abernathy and King were two prominent arms of the struggle against Jim Crow segregation during those years.

Roy Wilkins was a prominent civil rights activist in the United States from the 1930s to the 1970s. Wilkins was active in the National Association for the Advancement of Colored People (NAACP) and between 1931 and 1934 was assistant NAACP secretary under Walter Francis White. When W. E. B. Du Bois left the organization in 1934, Wilkins replaced him as editor of Crisis, the official magazine of the NAACP.

Under his leadership it evolved from passive protest toward aggressively lobbying large businesses to increase black employment, and Young himself acted as a direct advisor to Presidents Kennedy, Johnson and Nixon until his death in 1971.

As head of the Alabama Christian Movement for Human Rights, Shuttlesworth orchestrated the era’s most significant civil rights protest – Project C, better known as The Birmingham Campaign. It would be the beginning of a series of lunch counter sit-ins, marches on City Hall and boycotts on downtown merchants to protest segregation laws in the city. He also helped organize the March On Washington For Freedom And Jobs.

Hamer, a Mississippi sharecropper, changed a nation’s perspective on democracy.

She became involved in the civil rights movement when she volunteered to attempt to register to vote in 1962. By then 45 years old and a mother, Hamer lost her job and continually risked her life because of her civil rights activism. Despite this and a brutal beating, Hamer spoke frequently to raise money for the movement, and helped organize the Mississippi Freedom Democratic Party, to challenge white domination of the Democratic Party.

I encourage you to share these names and the name of many others with your children. I encourage you to choose a service project or type of advocacy that you would like to do that helps others and gives back. It can be large or small, regardless of what you choose to do, you are an important part of making change. Important, just as so many people were in making change during the Civil Rights Movement. I leave you with the words that John Lewis provided as marching orders for future activists after his passing, saying in part:

“Though I may not be here with you, I urge you to answer the highest calling of your heart and stand up for what you truly believe. In my life I have done all I can to demonstrate that the way of peace, the way of love and nonviolence is the more excellent way. Now it is your turn to let freedom ring.”

I urge all of you to learn more about the great men and women that fought for civil rights for all.

I urge all of you to give back.

I urge all of you to stand up for what you believe in.

Each and every one of us has a part to play in our community, just as so many played a part alongside Dr. King during the Civil Rights Movement.

There local events being organized for Monday. These are not official endorsed by the Edmonds School District but some of our families are involved with the planning so we are happy to share this information. 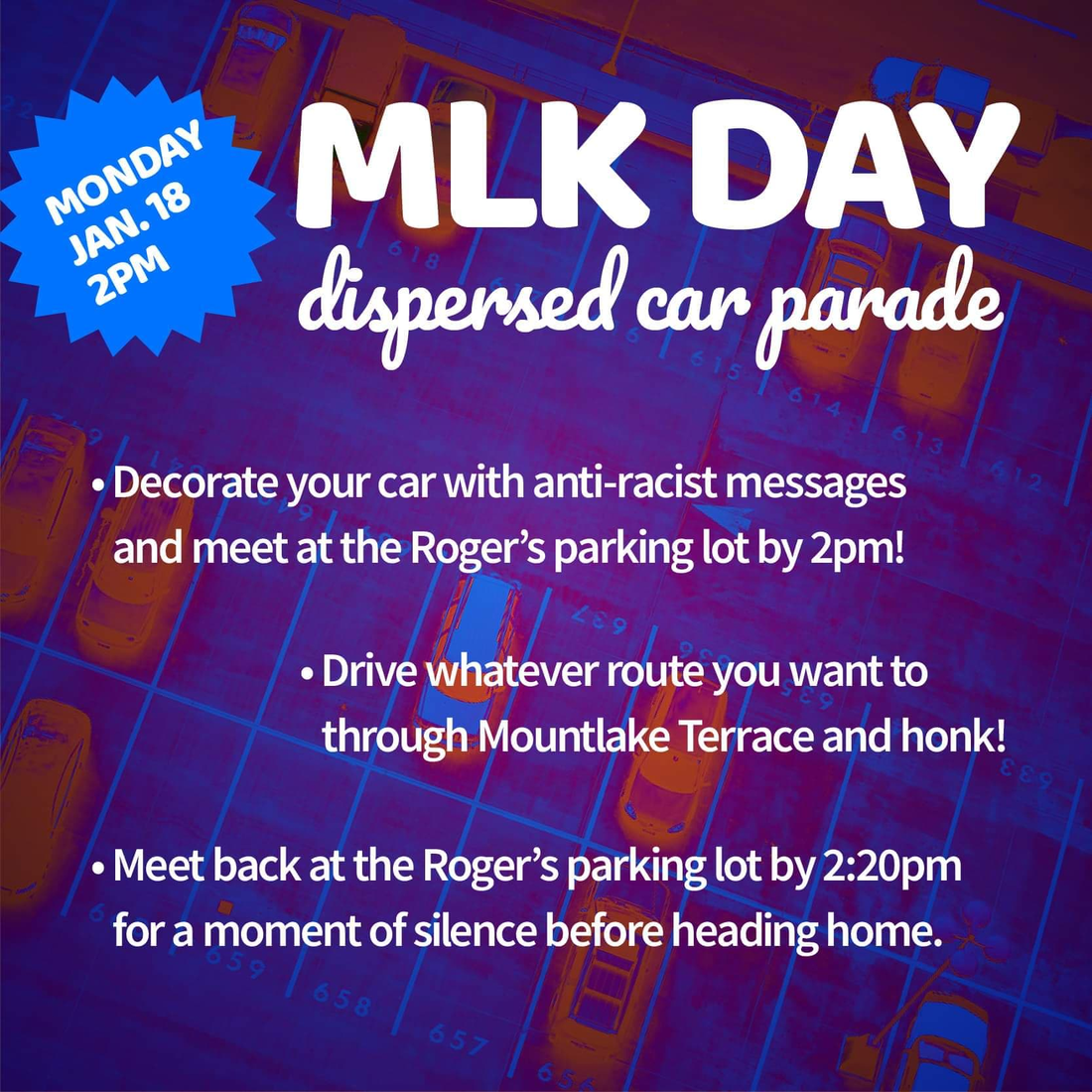 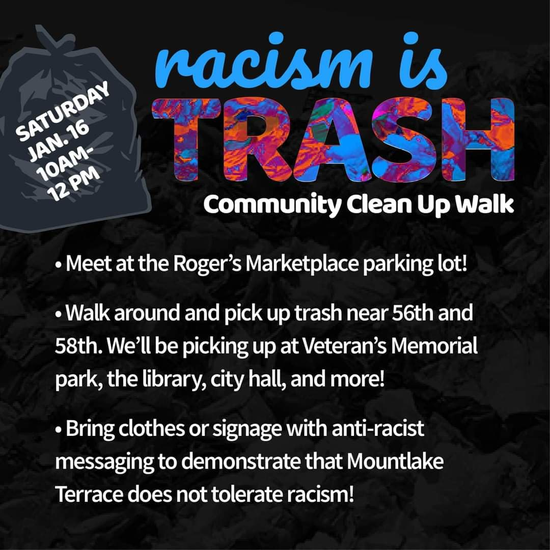 Play with your class!

To see this information on a much prettier flyer, click on the link below!

If you have not received a spirit wear tee or need a different size, please fill out this MTE Spirit Wear Form for each student.

Please reach out to erin@mtepto.org with any questions, comments or concerns.

Please join us for our "Brunch" PTO meeting!

MOVE 60 registration is officially open and the link is below. The program is going well. There are activities each day to keep students active. On Tuesday this session will be a live session with Mr. McCarthy and the students from Mountlake Terrace Elementary. We have so much fun. Joke time, Fun activities and ending with Show and Tell have been so much fun so far. Come join us this spring!! Mr. McCarthy

Any K-6 student can register for Move 60 and on the registration form they can sign up for a kit. Free! Same equipment as the fall session. (This is a bag contains balls, bean bags, scarves etc.)

If you have questions please contact me, Mr. McCarthy mccarthyt@edmonds.wednet.edu

The Student Technology Support team is offering student support on Zoom, Monday through Friday, 8:30 AM - 3:00 PM. Students can connect with a support team member at https://edmondsschools.zoom.us/my/esdtechsupport using the passcode: 030727. Students will be placed in a waiting room and admitted to a private breakout room once a support tech is available.

Student and Family Self Referral Form

3 No School for students

8 Kick Off to Kindergarten 6:00 PM Webinar

10 Report Cards available in Skyward or mailed if requested

25 Family Chat with Principal Mary Williams with SPANISH Interpretation 11:30AM or 6:00PM

Peachjar is an app that streamlines the way you find out about different events, opportunities, etc. that are happening in the community and our school district.

You will receive periodic emails from Peachjar with events and activities related to your school community.

You can also always go to the Peachjar Quick Link on our school website.

Clothes for Kids cultivates confidence and a readiness to learn by providing students and their families the opportunity to choose a personalized wardrobe at no cost.

The “What is Family Access?” webpage provides step by step instructions on how to log onto Skyward.

Through Skylert, you control how the district and schools contact you for emergencies, attendance calls, food & nutrition services, District eNews and other communications.