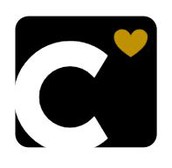 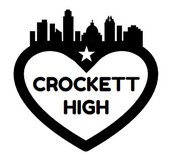 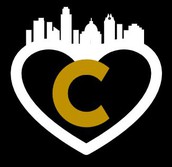 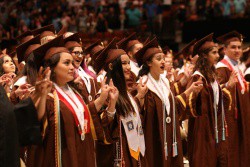 And just like that another school year is behind us! We had many successes this year that I was proud to announce in the Crockett Cougar Chatters. Our final celebration was graduating the 315 students in the Class of 2018. Many of you have asked about the story I told in my farewell address to our students. So, here it is:

Recently, I read a folk story from an unknown author about the value of life that said,

“One day a young girl asked her mother what is the value of her life. Instead of answering, the mother handed her daughter a rock and told her to sell it at the market and if anybody asked the price, to just raise two fingers without saying anything. The girl then went to the market and a man asked:

“How much is this rock? I want to put it in my garden.”

The girl did not say anything and raised up two fingers, so the man said:

The girl went home and told her mother that the man wanted to buy this rock for two dollars, the mother then said:

“Daughter, I want you to take this rock to a museum, if anybody wants to buy it do not say a word, just raise two fingers.”

The girl then went to the museum. A woman wanted to buy the rock, the girl did not say a word and raised two fingers, so the woman said:

The girl was shocked and went running home.

“Mother, a woman wants to buy this rock for two hundred dollars.”

Her mother then said:

“The last place I want you to take this rock, is to a precious stone store. Show it to the owner and do not say a word, if he asks the price just raise two fingers.”

The daughter then went to a precious stone store and showed the stone to the owner.

“Where did you find this stone? It is one of the most precious stones in the world. I must have it! How much do you sell it for?”

The girl raised up two fingers and the man said:

The girl, not knowing what to do, ran home to her mother.

“Mother, there is a man that wants to buy the stone for two thousand dollars!”

Her mother then said:

“So do you know the value of your life now?”

It does not matter where you come from, where you were born, the color of your skin, or how much money you were born into. It matters where you decide to place yourself, the people you surround yourself with and how you choose to carry yourself.

You may live your whole life thinking you are a two dollars stone, or realize that everyone of us has a priceless stone inside. Therefore, surround yourself with the people who can see that precious stone that you are.”

I wish each of you a restful and relaxing summer! See you in August as we look forward to another Always Victorious 2018-2019 school year!

There is a law in the state of Texas that is intended to give districts more local control to suit the individual needs of campuses. Our participation this school year (17-18) included a professional development date on November 10th. The Crockett Vertical Team has been approved for the following District of Innovation dates: Sept 24th, Jan 3rd and 4th, Feb 15th for the 2018-19 school year. These dates will be used as student holidays. Please organize your family's calendars accordingly.

Crockett is planning a celebration of our 50th anniversary! If you are interested in participating, please contact David Dupont (david.dupont@austinisd.org) or Kara Messer (kcmesser1@gmail.com) to be included in planning activities or to receive updates about events. If you know of graduates, students, parents, staff or community members who may be interested, please pass along this notice. See you next year!

The time is here! Incoming Crockett freshmen with parent consent will receive their Chromebooks in August. In order for your student to receive the device, please click on the link below to give consent. Beat the rush!

Cougar Cub Camp Class of 2022 will be held at Crockett on Thursday, August 9th, 2018 from 9am-3pm. This is a great opportunity to see old friends, meet new ones, and learn about Crockett High School. We have planned a series of fun and organized activities intended to help students develop academic and social skills. At the same time, students will be meeting fellow classmates, teachers, counselors, principals, etc. and becoming familiar with the layout of the school as a whole.

These dedicated students worked hard to master the curriculum to achieve the opportunity!

Who: Students enrolled in preAP and AP English classes for the 2018-2019 school year.

Why: Students will become familiar with a variety of genres and time periods, while practicing their close reading skills. This will all culminate with the AP English 4 test where one of the essays asks students to discuss how a given theme is developed in a text of their choosing. The more you read, the easier it will be to choose an appropriate text!

What: Students are required to read at least TWO books off the recommended reading lists. There will be an assignment based on these readings when school starts in the fall.

For book choices, check out the following lists.

Where: You can find access to these texts in many places!

- Login is your Student ID#

- Search for book or scroll through 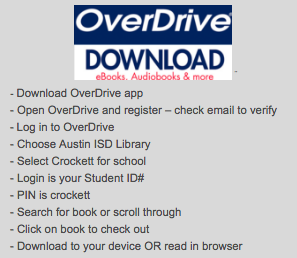 Erika Casillas, earned a Superior rating of 1 and a gold medal on her Vocal Solo "Ridente la Calma" by Mozart; and

Juli Castillo, earned an Excellent rating of 2 and a silver medal on her Vocal Solo "Widmung" by Schumann.

Both of these Senior girls should be congratulated on this fine accomplishment! We are very proud of them!

Shout Out to Ms. Coro

Crockett's art teacher, Christina Coro, was awarded a fellowship with the Arrowmont School of Arts and Crafts in Gatlinburg, TN. She will be there for four weeks taking two art workshops, then the last two weeks she will be working on her body of work for my project called "Give Back to Impact". Only one fellowship is awarded to a K-12 Art Educator across the nation. Congratulations!

Fellowship In honor of Bill Griffith’s 25 years of service, Arrowmont dedicated a fellowship in his name. The Bill Griffith Art Educators Fellowship is designed to change lives in unexpected ways for K-12 art teachers and indirectly for their students by providing them an opportunity for immersion in the creative and inspiring atmosphere that ...

Disney's NEWSIES, this Summer at AISD!

We are proud to announce that several CROCKETT students have been cast in the 2018 AISD Summer Theatre Series. This year's summer musical is Disney's NEWSIES, and AISD has added a black box show, Disney's SHAKESPEARE IN LOVE. Come see the shows at the AISD Performing Arts Center!

***Crockett Teachers working as Directors for the summer musical include: 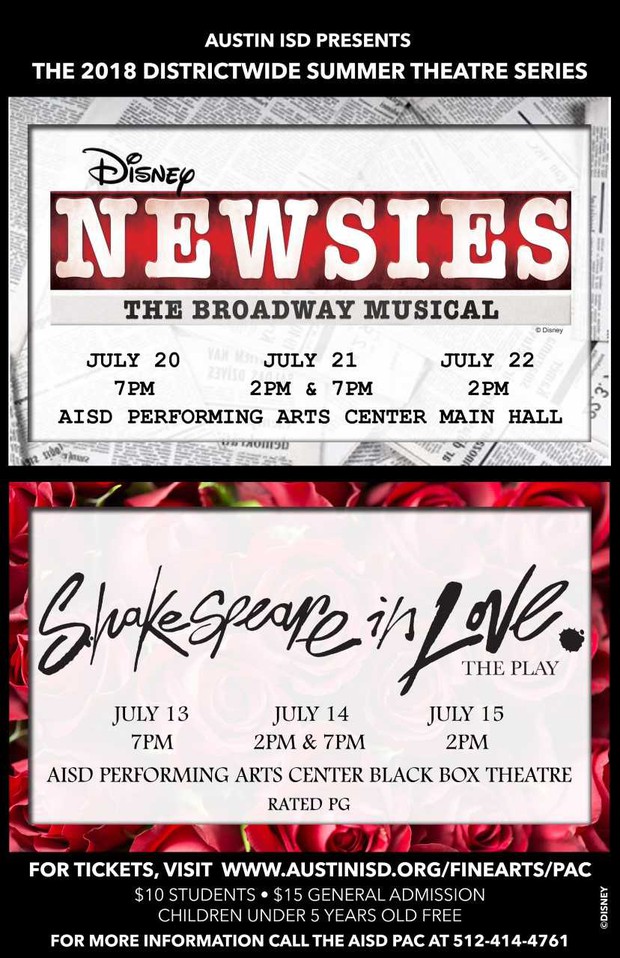 o With support from the 2018-2020 P-TECH/ICIA Success Grant, AISD will further develop work-based education partnerships and opportunities for students, strengthen student recruiting systems, review scope and sequence to better align with industry and ACC coursework, build the program’s capacity to offer courses and align current practices to the PTECH and ICIA Blueprint.

o AISD, Crockett Early College High School, ACC and a consortium of industry partners in the Governor’s Industry Cluster area of Architecture and Construction will strengthen and refine current practices that will advance the existing P-TECH/ICIA.

o The Construction Trades Academy at Crockett began five years ago. Evolving over time and engaging with additional partners in the Austin area, an active advisory board consisting of members from AISD, ACC and industry employers, trade associations and training centers has shaped the curriculum and work-based learning experiences.

Our guitar students did exceptionally well today at the State Solo UIL Contest. Six of our seven students received the top rating of superior with our other student garnering the second highest rating of excellent. This is the best we've ever done as a school!

Please recognize them for this outstanding accomplishment! 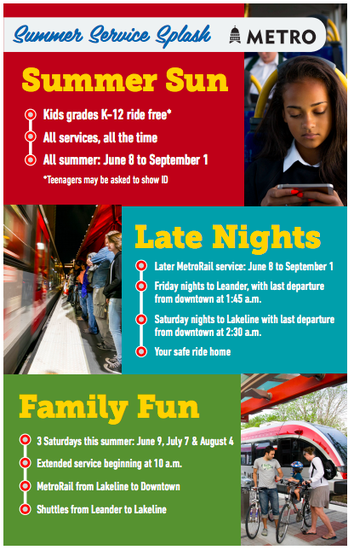 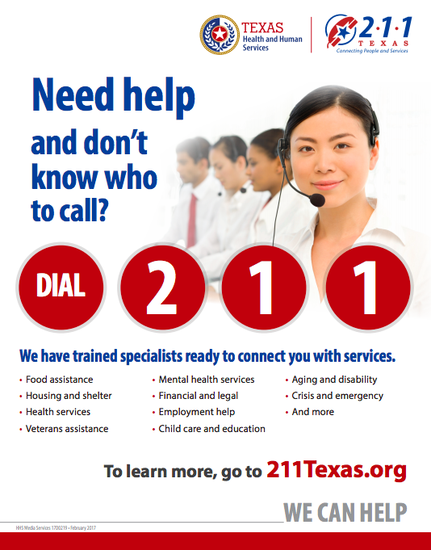 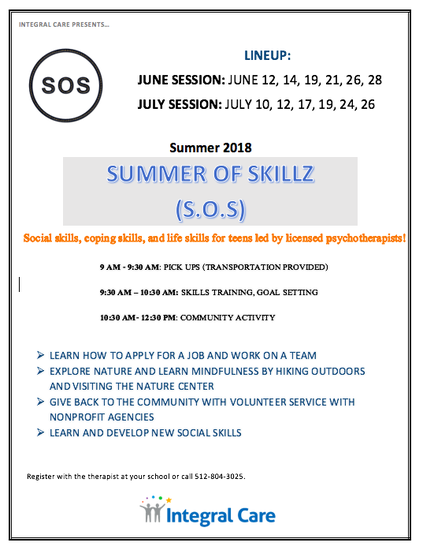 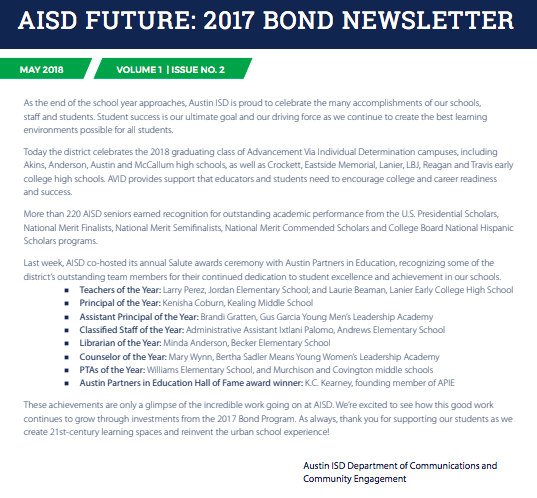 We know that many students last year watched the Netflix series 13 Reasons Why. With the second season being released May 18, we wanted to take this opportunity to share some information with you.

Based on the book by Jay Asher, the show sensationalizes serious themes, including drug use, sexual assault and suicide. Even if your children are not watching the show, they may be hearing about it from their peers. Counselors and administrators are addressing concerns as they are brought to our attention. We take every report we receive seriously.

Schools have an important role in preventing youth suicide, and being aware of potential risk factors is vital. We would like to ask you to partner with AISD to help students in need. You can make a world of difference by following these three simple steps:

* Talking or joking about suicide.

* Seeking out weapons, pills or other ways to die.

* Saying goodbye to friends and family as if for good.

* Changes in behavior can also be a warning sign:

o Increased use of alcohol and/or drugs.

o Change in friendships, or withdrawing from friends and social activities.

o Loss of interest in activities.

o Bullying (both the victim of bullying and the bully are at risk.)

Talk to your children:

* Let your children know you care.

* Do not be afraid to ask your children if they have or are thinking about suicide.

Attached you will find information on resources available for anyone struggling with mental health issues, including help for anyone who may be struggling with thoughts of suicide. Please do not hesitate to reach out to your child’s school counselor for help. 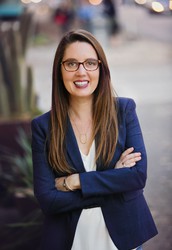 Follow Kori Crawford
Contact Kori Crawford
Embed code is for website/blog and not email. To embed your newsletter in a Mass Notification System, click HERE to see how or reach out to support@smore.com