Mr. Knipper from CN Elementary shared this video in his newsletter a week or so ago. I watched it and liked the message, but today it really hit home with me in a situation with one of our students and I wanted to share it with all of you.

This morning I had a student blow up and curse at me when she didn't want to do what I asked. Unfortunately, this isn't the first time it has ever happened to me and I can handle it, but I was most upset that she did it in front of the community members who were here to visit the coffee truck. I handled the situation fairly calmly and she finally complied with what I asked her to do but I was mad, to say the least.

I waited an hour or so to cool down before I called her in to talk to her (something my mom taught me long ago). I wasn't as riled but still planned to "let her have it". I have a pretty good background with this student, but this year I've noted on several occasions she's been less than pleasant and decided to it was time to let her know enough was enough.

When she came in the office she actually breathed a sigh of relief and said something like, "... oh good, I thought you were calling me in for another reason." Always an interesting statement that usually leads to us asking . . . so what did you think you were being called in for. But before I could even ask why she thought she was being called in, she acknowledged what she had done earlier and apologized. We discussed the situation further and I explained that it upset me because of the community members that were exposed to her behavior and the impression of our school that they were left with.

Then I came back around to ask why she thought she was being called in. That's when she started to cry. At first she didn't want to talk, but when she finally opened up I began to realize that the pain and uncertainty she is facing right now is most assuredly affecting her attitude and behaviors. This student lost her mom to cancer two years ago, just two months after being diagnosed. Now she is being raised by her dad and just found out that he has a condition that needs surgery but doctors don't believe he will survive the surgery if he has it. Every day she wakes up afraid that she will be losing her other parent and has no other family members to take her in. Can you even imagine what this is doing to her 15-year-old brain, heart, and spirit?

We talked a little bit longer and I let her know we were here for her and would help in any way that we could. I also let her know that talking about it, letting others help, and getting it out was a better option than keeping it bottled up inside and lashing out with bad choices and behaviors.

What she is going through is not an excuse for her poor choices, but it sure does help explain it.

If this young lady had been wearing her story on her sleeve, we could all have understood better what she is going through and how we could help. How many other students do we have at CN, that if they were wearing their stories on their sleeves, we could better understand and help? I am not advocating for all of them to get sleeves of tattoos or making excuses for their poor choices and behaviors, but I would ask us all to remember this . . . we have some kids in our building with life stories that would make our eyes leak. Some kids come to us every day without their basic needs being met, let alone the emotional support and love that everyone deserves. If we knew their stories, if we could read them on their sleeves, would we do things differently? I know it's hard. I know every kid has their own story. I know some kids rise above. I know sometimes kids make bad choices and it has nothing to do with home life. But we have to take time to build relationships with kids so that we know their stories and can better help them to grow and become the person they can be.

The CN Apparel Store is open until 9/15. Click on the link above and then click on the shirt style. Next add your logo from page 1 and glitter and names if you wish. The logos say sold but the shirts are not. If you need help, contact Mrs. Mault!

Thank you to Mrs. Mault for getting the Food Truck Fridays organized.

Thank you to all of you who supported Amanda Lee Coffee this morning.

The turn out was great and we will get even better

on supply and timing now that we know what to expect. 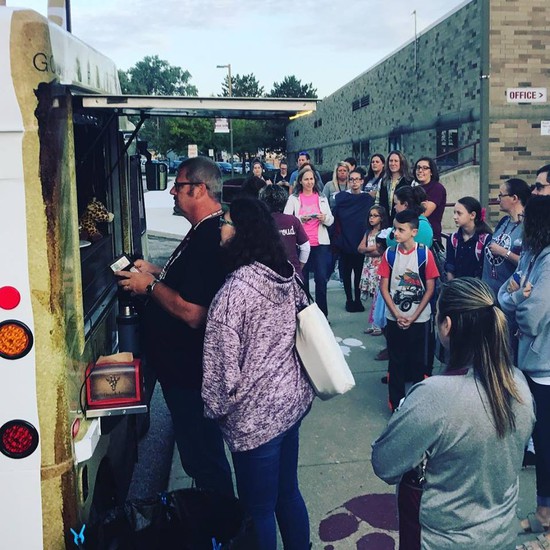 Congratulations to Abby Lindsey, Michelle Sirois, & Dara Yoder on being the Food Truck Friday Trivia Winners today. Here are the answers to the questions posed:

1. While at CN, what sports have I coached?

2. How many principals have I had during my time at CN (both as a student and staff member)?

I've had 7 principals while at CN Jr/Sr HS

3. In 2003 I gave birth to triplets. What was their combined weight? (Closest guess on this one wins)

The triplets weighed in at a combined weight of 15 lbs, 6 oz

Thanks to all who participated! I'm working on trivia for next time.