How many pregnant women would have the courage to fire a cannon during a war? One such woman was Molly Pitcher. Everyone salutes the soldiers and generals who participated in the war, but not many know about the role that women played. Molly Pitcher played a crucial role in the American Revolution. Pitcher’s courageous acts are still looked at today in awe. Her actions have encouraged others to follow her. Molly Pitcher’s courage and grit helped our country learn the importance of women. All women can change this world for the greater good of all mankind. 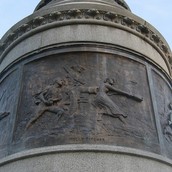 Molly Pitcher firing a cannon during the Battle of Monmouth.

This statue of Molly Pitcher was built to honor her courageous and selfless acts. It is located in Carlisle, Pennsylvania.
www.biography.com
Molly Pitcher at the Battle of Monmouth
Paste in your blog/website to embed.