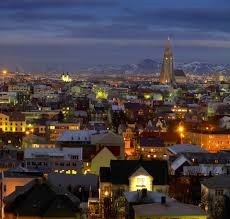 Two reasons Christmas is so important in Iceland are the birth of Christ and the other one is the celebration of more daylight hours. It is dark in Iceland most of the day and all night during the Yule (Christmas) season. This is why people in Iceland decorate with a lot of light during the Yule Season. They decorate their homes inside and out. The main focus of the living room is a very bright Yule tree.

Christmas in Iceland has many similarities to our traditions in the United states. We both traditionally put up Christmas trees, send Christmas cards and buy gifts for family and friends. One of the most popular Christmas gifts year after year in Iceland is a book. They even refer to this time of year as the “book flood”.

One tradition in Iceland that is very different than the United States is that they have 13 different Santas in Iceland. They don’t call them Santa they call them Yule Lads. The Yule Lads do not live at the North Pole. They live in the mountains around Iceland and take turns walking to town to deliver gifts. The gifts start arriving on December 12th. The gifts are left in shoes that the children have placed on the window seal. If you are bad the Lad will leave a rotten potato instead of a gift. All of the gifts are delivered before Christmas. The lad's parents are trolls that live in the mountains. Their purpose was to frighten children. The lads have become friendlier over the years.

Christmas celebrations in Iceland start December 23 and last until the Epiphany. The Epiphany is January 6th. During this time celebrations include: lots of food, parties, lights and fireworks.

Christmas history in Iceland is based on two sources. Preparation for Christmas starts four weeks before December 23rd. The house must be cleaned and decorated as well as traditional food prepared. 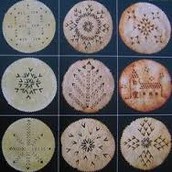 Each family has their own design.

This picture just shows 4 of the 13 different Yule Lads. 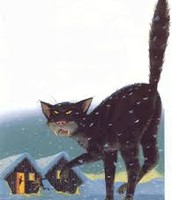 Don't get eaten by the Christmas Cat!

Christmas in Iceland has many similarities to our traditions in the United states. We both traditionally put up Christmas trees, send Christmas cards and buy gifts for family and friends. One of the most popular Christmas gifts year after year in Iceland is a book. They even refer to this time of year as the “book flood”.

December 23 is St. Thorlakur Day. This is the day that St. Thorlakur died. To celebrate this day the people of Iceland typically put up and decorate their “Yule tree” on December 23rd. They also do a lot of shopping on this day. The stores stay open late for all the last minute shoppers. The food they enjoy on St. Thorlakur day is skate. Skate is a fish that has a terrible odor. The fish is flat and has a long tail.

Christmas Eve is called Yule eve in Iceland. The celebration starts at 6:00 pm on Yule eve. It is tradition to eat a family meal on this day and then open presents.

Yule day (Christmas Day) is when the extended family gets together to celebrate. The traditional meal includes a roasted leg of Lamb, a sea bird called rock ptarmigan, red cabbage, potatoes, peas and leaf bread. The leaf bread is a fried dough. The leaf bread is cut out in a pattern. One family tradition is to cut the bread into a design based on a family pattern. The dough is round, about the size of a plate.

The second Christmas is celebrated on December 26th.

Lamb is the main dish served at Christmas.

Books are a traditional Christmas gift in Iceland.

Lights and fireworks are very important in Iceland because it is dark all the time during this season.

Follow Melanie Fessler
Contact Melanie Fessler
Embed code is for website/blog and not email. To embed your newsletter in your email, click HERE to see how or reach out to support@smore.com