Jaymi is using Smore newsletters to spread the word online.

Get email updates from Jaymi:

My musical journey started as soon as I was born in Coral Springs, Florida, 1997. Musical traits are literally in my blood. I am related to a few interesting people...I am related to our 18th president, Ulysses S. Grant who fought in the Civil War, Joshua Slocum who sailed around the world and got lost in the Bermuda Triangle and last but certainly not least in the marching band world, John Phillip Sousa who created the sousaphone and redefined marching bands everywhere.I guess you could thats why I am brave, direct, adventurous, kind of wise, and creative.

Not only that, but, my mom is an amazing singer and her side of the family is full of musicians. They were inspiring, so, in third grade I joined chorus and stuck with it. Yes, I’m that chorus girl in disguise that’s was playing in my high school band for a year. You see, I wanted to join both band and chorus in middle school but I wasn’t allowed. So, I joined choir, picked up the guitar again, and started learning piano. I’ve been in All-County Choir, All State Choir, multiple Solo & Ensembles, as well as Talent Shows and song writing contests. I actually won an online song writing contest for my song “Consider Me More” that I wrote back in middle school which included the usual singing accompanied by guitar. Now, I play five different instruments including my voice, guitar, piano, bass, and clarinet. I can’t say that I play violin yet because I am only learning it right now. In choir, I’ve certainly hit the top in high school and took position as Student Conductor in the Pine Ridge Choir. I say that because I have had many chances and practice in directing my choir at my director's discretion while while they were absent or sick and I even entered the student conductor section in Solo & Ensemble where I had to prepare and teach a song all by myself to an ensemble and then conduct it in front of a judge. In band, I improved a lot and have been honored to be our band librarian. I didn’t take up band or the clarinet till halfway through my junior year when I needed to fill a class period in my schedule. I was really scared about it for several reasons. One, I’ve never played clarinet before. Two, I didn’t know these people and quite frankly the band was intimidating yet impressive. And, three, I had to balance it with choir. It was a really tough decision, but now, I know I made the right choice...even though the first semester I took was awkward with a certain someone. However, I’ve grown a lot musically since I joined band. It was tough at first, but now…I absolutely love it. I feel like I’ve learned so much more about music that I never knew before and I'm really glad I had the opportunity to be a part their musical family as well. Now if I can only figure out which family I want to nurture. I'm sure I will eventually, just need to figure out how to...figure it out...Yes.

Anyways, now I'm here with an amazing couple of music scholarships pursuing my future. Being a part of both choir and band has given me a broad view of the music world. Whichever side I teach on, I want it to reach across. I want to get rid of the wall separating choir and band in many schools. Both have many things to learn from each other in style and structure. I want to be able to create an environment where both sides respect each other and support each other instead of compete. I want choir kids o know that they can go learn an instrument if they'd like and I want them to be self sufficient. I want band kids to know that singing is not lame. It's not always easy and it's not always hard either. It's just another instrument you can learn except it's a part of you. As long as you can speak and carry a conversation, you're not tone deaf. You just need a little extra help. And both sides can be very complimentary but I often find band and choirs in competition trying to out cool each other. I want it to stop. Both are equally amazing, but they could be more amazing when they learn from each other.

In Kindergarten I wanted to be a teacher because I loved my Kindergarten one, Mrs.Norberg. She had short blond hair, kind features, and glasses. Although, now that I think about it, I'm not sure why she was my favorite. She always yelled at me for talking during class, but I guess she valued me nonetheless.

In third grade, I joined the school choir. I remember holding this yellow piece of paper and contemplating on auditioning. I think that was my first ever audition and I was...kind of scared...but really excited because I wanted to be able to sound as wonderful as my mom does. That's when my passion started to really grow. There was something really amazing about being part of that elementary choir and I think that was...just the feeling of being accepted into something.

After that, I also became a part of the Sunrise Flippin' Dolphins, a tumbling/gymnastics team at school. If I had better resources, I probably would've continued gymnastics.

Instead, I ended up buying my first guitar, a teal FirstAct acoustic, at eight years old with my own birthday money and the intent of becoming a rock-star. It made me feel really cool despite getting bullied in daycare. I would practice every single day and then my dad got me my first half-size guitar, a beginner's Johnson acoustic guitar. He got himself one as well and we went to lessons every Monday night for a few months. Due to a disagreement between him and the store, we stopped going. So, I gave up for awhile and had to re-teach myself in 5th grade. Then the economy crashed and things got really hard.

I started teaching myself piano in 6th grade. I found my mom's really tiny keyboard that was about two and a half feet long. I still remember my first-real two-handed song: "Lean On Me" originally by Bill Withers. This was also the time when I started to get serious about playing guitar. I also wrote and completed my first original song, "I Can't Be Without You." Yup, I was a pretty deep kid and still am in some ways. It was about my second big crush to be honest and now...it's just a song. It's whatever you wanna make out of it. I wrote the majority of my nine songs in middle school. I just had so much time on my hands. It's funny how I can barely find 30 minutes now during the school year... But, when I did, I was playing guitar, writing songs and posting YouTube videos. If you really want to see them, ask and you shall receive the ones I approve of... Haha.

I attended a ton of socials. I was pretty weird. I was bullied. I volunteered for the library a lot, it kind of became another home to me as well as the choir room. I also joined the Yearbook staff for two years in a row and I was proud that a ton of my photos got in. I took up keyboarding class and even a dance class but I quit the dance class after being pushed around by some other kids.

I would read a lot too, I finished the Twilight Saga in a week's time, the Harry Potter series in a month, and the Percy Jackson series in another. I was obsessed with Twilight to the point where those books never left my hands. I didn't even want to eat dinner, I just wanted to read and soak in everything. It was my escape when things went sour and they did often. 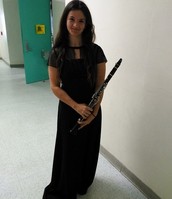 This was taken by my friend Brittany, also a clarinet player. I had to switch quickly between band and choir uniform during a concert and she wanted to take a picture as I was on my way to putting away my clarinet in my choir dress. 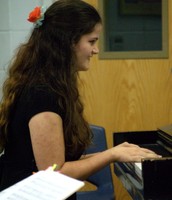 Taken by my friend Lizzy. I love this picture of me playing piano at Solo & Ensemble, I received an excellent that day. 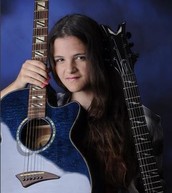 Guitar has always been my main instrument...however, I'm not all that familiar with guitar scales...I can play all 12 major ones on piano and clarinet, but not guitar.

The first and only musical I have been in. 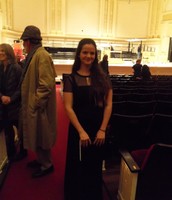 My high school choir was lucky enough to be invited to sing in Carnegie Hall in New York City! I was very to lucky to be able to fundraise and go.

We got to sing at City Hall during my 5th grade year. We also got to meet the Mayor of Deltona.
Consider Me More (ORIGINAL!)
Fallen Angels by Black Veil Brides (GUITAR COVER)

Jaymi is using Smore newsletters to spread the word online.