Get email updates from Nate: 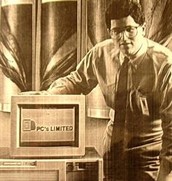 Dell with one of the first computers he made

The first laptop made by Dell, the Inspiron 1501

Dell was selling computers he made out of his college dorm in Texas University for 15% less than the big companies. He was kicked out of his dorm by his roommates, so he dropped out of college after freshman year and started his own company called PC's limited.

Dell never gave up on his idea, even when his parents wanted to make him a doctor he went his own way. He was very smart and understood computers well so he started making his own computers. He also was very good at business and began his own business at age 12 selling stamps out of a mail order catalogue.

I think he was successful because he never stopped thinking about how he could make money. Even at young ages he was going out of his way to try to make money and using initiative and stayed motivated even when times got bad.