Surekha is using Smore newsletters to spread the word online.

Get email updates from Surekha:

Happy New Year! Yes, I know it is a month late...but January got away from me and I figured I would give you break from my ramblings.

Concert season is in full swing. Hope you got to enjoy the fantastic concert last week. UIL Solo/Ensemble is coming up, followed by Spring Break and then UIL Concert and Sightreading Contest in mid April at Little Elm High School.

Please consider chaperoning for your student’s band for UIL Concert and Sightreading. We will need 2-3 parents per band. Even if you are not able to chaperone, please come to watch your student’s band perform. It matters! There will be more details later about chaperone sign up, dates, times of this contest.

WE HAVE AN URGENT NEED FOR A PROPS CHAIRPERSON! The directors are already in full swing with planning for next fall’s show and need a few handy people to get the props going. Any current 9th grade parent(s) that can step up, it would be appreciated. (10th

grade parents are welcome as well.)

We have several band booster positions opening up for next year, since students (and parents) are moving on to Plano East. Please consider filling one of these positions for the 2020-2021 school year. RECRUIT YOUR FRIENDS AND INCOMING 8th GRADE PARENTS!

Here is the list of openings (descriptions are at the end of this newsletter):

If you or someone you know is interested in joining the band booster board, please contact me at minoo_wille@verizon.net.

Please don’t hesitate to contact me with questions or concerns. Take care and hope to see you soon! 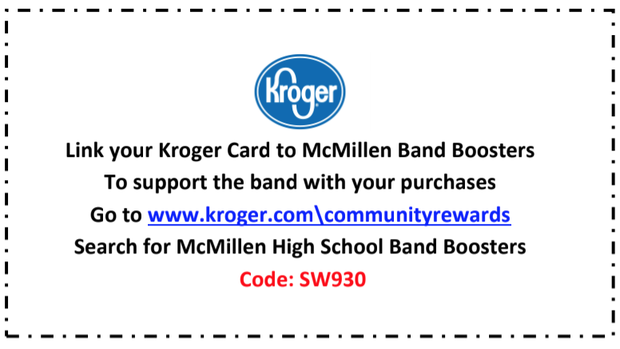 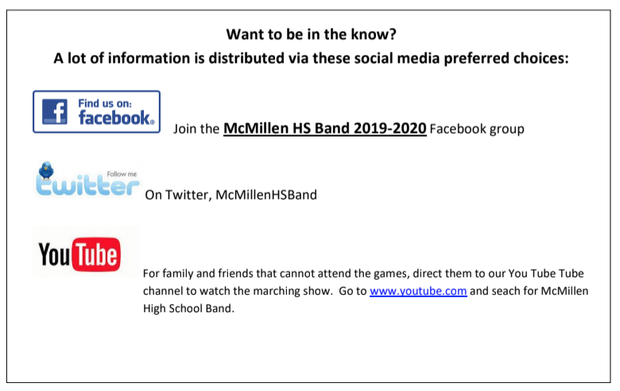 Available: McMillen Band Board Positions for 2020-2021

Game Day Meals – Organize, order, purchase, and serve meals before games and contests, while working within a budget. Work with band gala chair to plan and order the meal for the band gala in May. This person needs to be very organized, and be able to resist the hungry requests from never-full teenagers!

Fundraising – This is a very important job, as it plans fundraisers to benefit the entire band, as well as gives individual students the ability to fundraise needed funds for band fees, the spring trip, competition fees, spirit wear, and more. Typically, the band has a few fundraisers that raise money for the band as a whole such as SnapRaise and Mattress Palooza! Individual fundraisers have included: popcorn and car washes! This person works closely with the treasurer, president, and directors to plan successful fundraisers that meet the financial needs of the band.

Color Guard Parent – This person acts as a liaison between the Color Guard/Color Guard Director and the booster board. This person will make sure that members of the color guard have their supplies and let the supply chairs/uniform chairs know of any issues.

Props – This person will work with the band directors to create props for the marching show. Skills may include hammering, welding, painting, etc. A committee can be formed to plan and produce the props. The band boosters have a storage shed in Wylie. The Props Chair will have access and a key to this storage shed to store the props after marching season.

Photo Buttons - The Band Boosters use a parent photographer to take pictures of all the students in their band uniform, during supply pick up day, and make spirit buttons from them. These are sold to family and friends who may want to wear them to the games. The Band Boosters own the button-making machine.

Band Awards Gala Co-Chair – This person works with the directors to plan the awards, the theme, design the invitations, decorations, tickets, sell tickets, create the award certificates, set-up, and other facets of the Awards Gala. Work with game day meals chair to organize the dinner portion of the event.

Historian – Uses photos that are taken throughout the year to create a scrapbook of the year’s band activities. This scrapbook is given to all the band students at the band gala.

Photography – Take photos of the students at the games (in the stands and on the field), as well as other band events, and upload photos to the band Shutterfly site. If your schedule permits, photos can be taken at summer band rehearsals, in the band hall, etc. Organize and work with other parents that also may want to volunteer to take photos during games and other events. Also, may need to take individual, section and full band photos on band photo day, unless another parent can be identified. Band photo day is during summer band.

Videographer – Video tapes halftime shows, concerts, and other band events. Posts them on the band FB page and/or saves them on CD for the directors.

Surekha is using Smore newsletters to spread the word online.