Made in the U.S.A

Made in the U.S.A

The War of 1812 started because of France and Great Britain's impressment on American trade ships. In response to the impressment, Thomas Jefferson stopped all foreign trade which hurt the American economy. This was later revised to stop only trade to Britain and France. Since the American economy was still hurting, we decided to only stop trade to Britain and keep trading with France. This caused conflict between Britain and America and angered Americans. War Hawks in Congress eventually got enough support to declare war on Britain. We started by attacking Canada with the hopes of obtaining more land, however we did not succeed in that endeavor. It wasn't until later that our victory came.

Burning of Washington DC: The British sent troops to Washington DC to attack the Americans. The President, James Madison, and his wife just narrowly escaped before the British showed up. Britain captured Americans and burned the capital city.

Battle of New Orleans: Andrew Jackson and his American troops managed to fight off British attacks and defend New Orleans from invasion. The British lost 2,036 men while the Americans only lost 71. 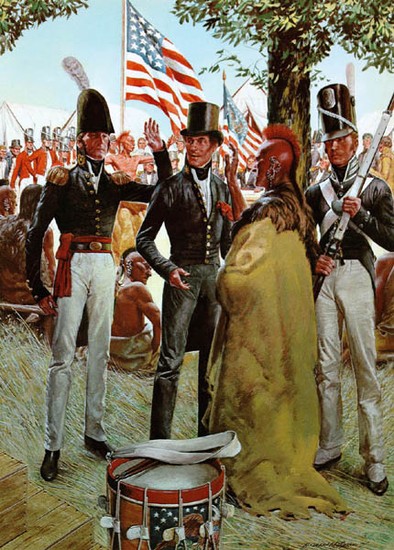 In the year 1812, America was not exactly prepared for war. We had less than 10,000 soldiers, only 17 ships compared to Britain's thousand, and not a whole lot of money. However, that didn't stop us from declaring war on Britain. We might not have had the best military force, but we loved our nation and would fight to protect it. We lost in Canada and our capital was burned down, but that only fueled our desire to beat Britain! We had to steer clear of the Federalists though, because they didn't support us going to war. However, we felt that military and war is extremely important to the success of our great country. We won many battles like Lake Erie, Horseshoe Bend, Thames, and New Orleans. We even defeated Tecumseh! Thanks to Andrew Jackson, the war ended in New Orleans and we celebrated our victory! America had won the War of 1812. The Treaty of Ghent was signed and there was finally peace between us and Great Britain. Take that Federalists! This embarrassed them greatly and pretty much ended the Federalist party. I guess all that complaining about the war at the Hartford Convention didn't really do them much good! Seemed like a waste of time to me. The War of 1812 did wonders for domestic manufacturing. We were able to start up more industries here like manufacturing cotton. We no longer feared the Indians. We really are an independent nation and I'm proud to be an American!