The so-called “Year Without a Summer”—1816—belongs to a three-year period of severe climate deterioration of global scope caused by the eruption of Mt. Tambora in Indonesia in April, 1815. With plummeting temperatures, and disruption to major weather systems, human communities across the globe faced crop failures, epidemic disease, and civil unrest on a catastrophic scale. In cultural terms, the dreary summer of 1816 is best known as the setting for Mary Shelley’s writing of Frankenstein, a novel whose iconic Creature offers a figure for the millions of hungry and dispossessed of Europe during the protracted climate emergency that followed Tambora’s eruption.

Mount Tambora (or Tomboro) is an active stratovolcano on Sumbawa island, Indonesia. Sumbawa is flanked both to the north and south by oceanic crust, and Tambora was formed by the active subduction zones beneath it. This raised Mount Tambora as high as 4,300 m (14,000 ft), making it one of the tallest peaks in the Indonesian archipelago, and drained off a large magma chamber inside the mountain. It took centuries to refill the magma chamber; its volcanic activity reaching its peak in April 1815.

Using radiocarbon dating technique, it has been established that Mount Tambora had erupted three times before the 1815 eruption, but the magnitudes of these eruptions are unknown. They all shared similar eruptive characteristics: central vent eruption and explosive eruption, except the lattermost eruption had no pyroclastic flows.

In 1812, Mount Tambora became highly active, with its eruptive peak in April 1815. The magnitude was seven on the Volcanic Explosivity Index (VEI) scale. Its eruptive characteristics included central vent and explosive eruptions, pyroclastic flows, fatalities, land and property damage, tsunamis and caldera collapse. It created a long-term effect on global climate. This activity ceased on July 15, 1815. Tambora went into eruption again, but only inside the caldera. It created small lava flows and lava dome extrusions; this was recorded at two on the VEI scale. This eruption created the Doro Api Toi parasitic cone inside the caldera.

The 1815 eruption was so massive that pyroclastic flows fast-traveling streams of hot ash and rock reached the sea on all sides of the peninsula. The sulfur dioxide and other chemicals that the eruption spewed into the atmosphere circled the planet, blocking sunlight and cooling Earth's average temperature, creating a so-called "year without summer."

"It makes the St. Helens eruption look small," said Erik Klemetti, a volcanologist at Denison University in Granville, Ohio, and the author of the Big Think's Eruption's blog.

But Tambora's eruptions aren't always so huge, and there's no reason to think any looming eruption would be so deadly. In fact, having had such a large eruption as recently as 1815 (geologically speaking) makes it less likely that a similar eruption will happen anytime soon, Klemetti said.

"The Year Without A Summer"

Tambora is classified by specialists as Ultraplinian, the most violent of all categories of volcanic eruption, named in honour of the Younger Pliny's description of the destruction of Pompeii by Vesuvius in AD 79. Such eruptions propel quantities of sulphurous gases into the stratosphere, where they combine with water vapour to create 'aerosol' clouds of drops of sulphuric acid. The Tambora eruption caused unusual phenomena around the globe. In the north-eastern United States in the spring and summer of 1815 the sunlight was dimmed and reddened by periods of fog, which wind and rain did not disperse. It was described as a kind of aerosol veil. 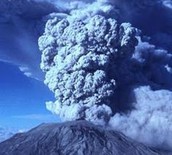 The evening of April 10, 1815, the eruption moved into full force with an explosion that was heard more than 1,200 miles away in Sumatra. The ground shook as massive boulders were tossed about like pebbles and caused havoc in all directions. Columns of flame shot up from the mountain and melded together to carry a plume of gas, dust and smoke miles up into the sky. Rivers of incandescent ash poured down the slopes at more than 100 miles an hour, destroying all in their way before they hissed and boiled into the sea. Ships in harbours were trapped in rafts of pumice stone, while tsunamis were driven across the Java Sea. Volcanic ash fell as far away as Borneo.

Ash and debris rained down for weeks and houses for miles around collapsed. Fresh water sources were contaminated and crops failed, while sulphurous gas caused lung infections. It is thought that 10,000 people had been killed instantly, but thousands more died of starvation and disease and the death toll in Sumbawa and neighbouring islands has been estimated at anything from 60,000 to 90,000.