Get email updates from Matias:

Jackie Robinson was born January 31, 1919 and passed away on October 24, 1972 in Stamford CT. but throughout his life here on earth he accomplished many things. what Jackie was best known for was his baseball career. He was one of the first ever African Americans to play Major League Baseball. He started playing in for the Brooklyn Dodgers at age 28 and won several awards throughout this time, such as the 1942 rookie of the year award and in 1949 Jackie Robinson led the National League in most stolen bases. although he changed the way we look at baseball today, Jackie Robinson also faced many hardships throughout the years. For example he often hated by many fans and even team mates while playing baseball. Since back then it was popular for blacks tom play with whites, he would be given hardly any time to play and if he did the pitcher might often aim the through directly at Jackie. Lastly he and his family were always in danger of getting hurt or even killed, because back then lynches were common. But now looking back on Jackie Robinson's life we see that he a talented, courageous, daring leader. 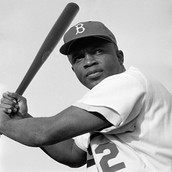 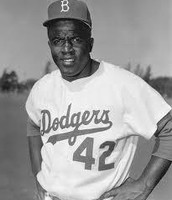