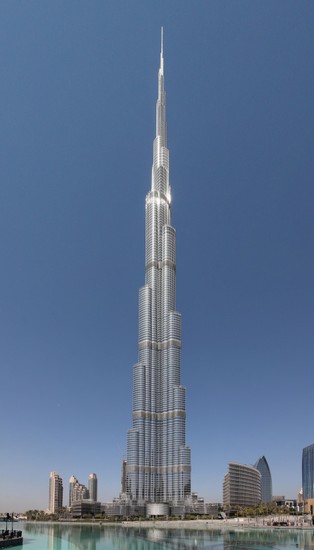 The Burj Khalifa is located in Dubai, which is the largest city in the United Arab Emirates. It is the tallest building in the world. The Burj Khalifa is more than 2,716 feet tall (828 meters), and 163 stories. It holds 7 world records; tallest building in the world, tallest free-standing structure, highest number of stories, highest occupied floor, highest outdoor observation deck, elevator with the longest travel distance, and the tallest service elevator. The construction of the skyscraper began on September 24, 2004, and ended on October 1, 2009. As many as 12,000 construction workers were working on it at a time. It cost about $1.5 billion. The total floor area of Burj Khalifa is 3,331,100 sq ft, and it has 58 elevators capable of going 40 mph. The building contains a large observation deck on level 124, a restaurant on level 122, 1,044 private residences, 37 office floors, 160 hotel guestrooms and suites, a park including 6 water features and 3,000 underground parking spots, and a 4 story fitness and recreation facility. The Burj Khalifa is about 3 times as tall as the Eiffel Tower, and about twice as tall as the Empire State Building. The weight of the concrete used in the skyscraper is equal to about 100,00 elephants. It is supplied with around 250,000 gallons of water a day. You can see the tip of the building from almost 60 miles away. Burj Khalifa is the pride of Dubai. It represents how far the country has come in 50 years. The building design is based on Hymenocallis, which is a greek flower. 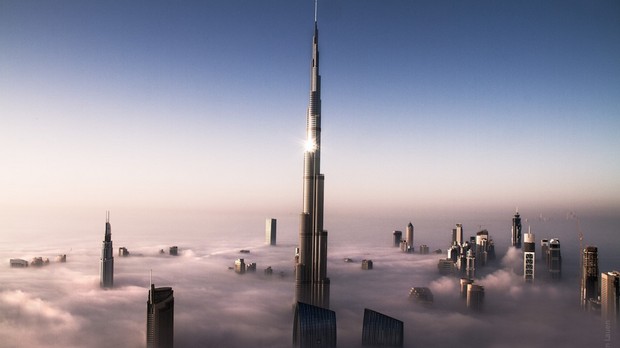