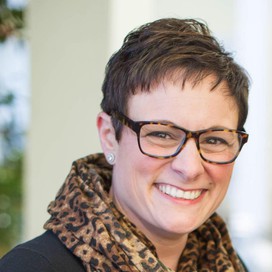 News from the MSHS Greenhouse

News from the MSHS Greenhouse

As March roars in like a lion, we are taking great pride in our hard work. We spent over three hours this week planting the majority of seeds we will plant this season. So far we estimate that we have planted over 1,500 seeds!

Our entire crop of flowers - with the exception of the Morning Glories that are currently soaking overnight per their packet's directions - is now planted and we can't wait to see what we get. Zinnias, Snapdragons, Marigolds, Calendula, African Daisy, Coleus, Cosmos, Elf Sunflowers, Coreopsis, Mexican Sunflowers, a cut flower mix, as well as MAMMOTH SUNFLOWERS round out our annual varieties. (We are pretty excited about the 80 MAMMOTH SUNFLOWERS we planted... They just might be a part of the Take Your Child to Work program in B102 this year... time will tell.)

Oregano and Thyme seeds were planted as well as peppers (bell peppers - by request from last year's customers). We did a few large planters of Mesclun mix and also planted our first tomato crop (see next story).

Six varieties of tomatoes went into containers this week. Our Cherry Tomatoes and Sweet 100s are the smallest varieties we are growing and the San Marzanos are the only plum variety we will grow. Rutgers Tomatoes are a must (Mrs. Descalzi is an alum) because just like the University, these tomatoes are popular. We planted two beefsteak varieties so far this year - the SUPER Beefsteak and the BIG BOY... Look to the Big Boy to yield lots of tomatoes weighing about a pound or or so. Yields from the Super Beefsteak are generally slightly less than the Big Boy but the fruits are meaty and generally well over a pound in weight.

We also had a visitor checking in to be sure we would still have tomatoes available this year. We assured him we absolutely would have them... in MAY.

We will be planting tomatoes again next week so that we have lots of different aged plants available for purchase. Last year we were told that some people prefer to plant younger plants than what we had for sale so hopefully delaying them a week will keep them small enough for the experienced tomato growers buying from us... Time will tell.

Look for some tips and interesting facts about tomatoes - including the "Mortgage Lifter" - in next week's issue of "What's GROWing On?". 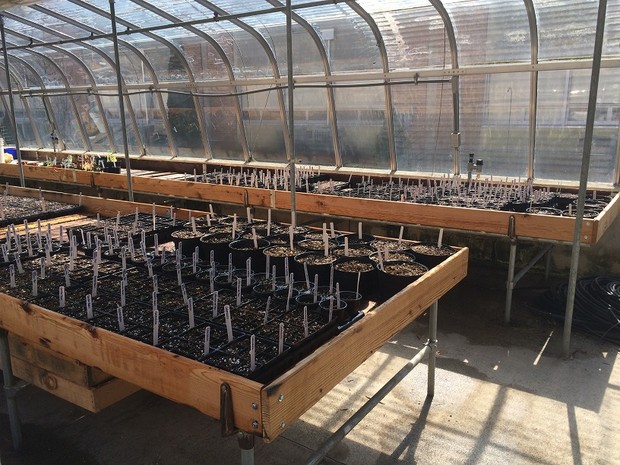 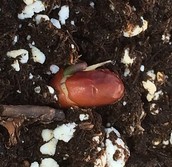 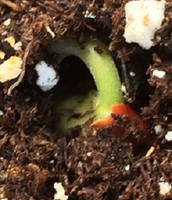 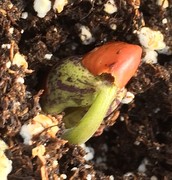 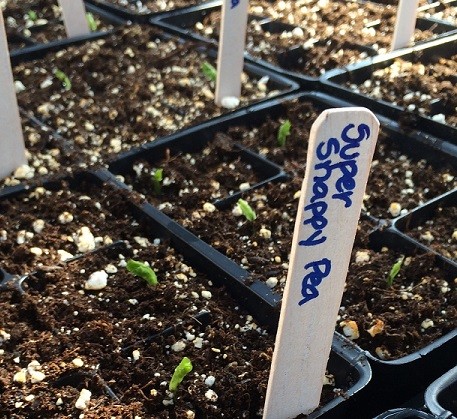 In just under five days, the Super Snappy Peas made their entrance... Quite snappy and a super sight as Mrs. Descalzi always worries that the stuff we plant isn't going to grow! Give her time... She'll get used to this greenhouse stuff. We are super glad these babies were as snappy as they were because we planted them about 10 days later than they should have been planted and we were concerned that we'd be too late for harvest. At this point we are back on schedule and hopeful for an early May harvest! 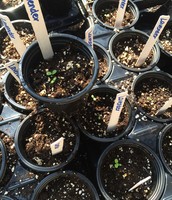 We've done it again with Lavender... Apparently our greenhouse is the French countryside... Provence maybe... 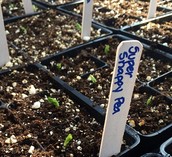 No carrots yet, but we're so excited to have PEAS that we had to post it twice.

Welcome to the party Green Cos...

This week our radishes decided to join the party in the salad bowl. They look fantastic planted in neat little rows! The Mesclun is growing well - you can see from the picture that it is bending toward the window so we will be turning the planter later this week to encourage more even growth. 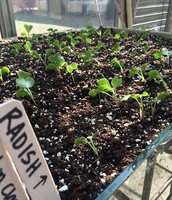 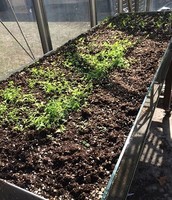 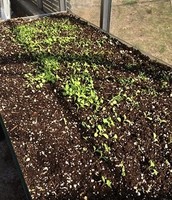 Stay Tuned for Next Week's Update! 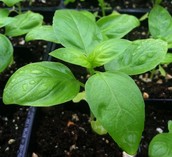