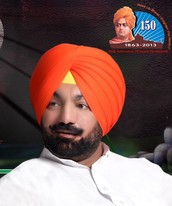 A statue of Iron Man of India Sardar Vallabh Bhai Patel will be installed at the Sardar Sarovar Dam in Gujrat, which will be double the length of Statue of Liberty in America. National BJP Leader and Kisan Morcha All India Secretary Sukhminderpal Singh Grewal stated that All India President BJP kisan Morcha Om Prakash Dhankar, is the national coordinator of the coordination committee that will collect iron from every household of rural India. Grewal stated this while addressing the media persons here today. He said the statue will be a symbol of the immense contribution of Sardar Patel and his legendary persona. Patel unified the 562 princely states of India after which the statue will be named as the Statue of Unity. Kisan Morcha All India Secretary said that every household and every person in the states will be associated with this project, which will be source of inspiration for the unified India and also for the generations to come. He said this is a dream project of Gujrat’s chief minister and future Prime Minister of India Narendra Modi. Keeping in view the stature of Sardar Patel, the statue will be 182 m (600 ft) high, which would be equal to a 60 storeys building, whereas the Statue of Liberty is 93 m high. The way Statue of Liberty represents America, the Statue of Unity will represent India. Grewal said that Sardar Patel was a farmers’ leader. Bardoli Satygraha gave him the name of Sardar. The iron collected from 6.5 lakh farmers of the country will be used in erecting Statue of Unity. At national level, state level and district level, Iron Collection Coordination Committees have been formed to collect iron from the households of farmers. These committees will include people from all the walks of life. The committees will have complete record of the iron collected from different places. Grewal stated that at the national level MP Thavarchand Gehlot from Madhya Pradesh, former union minister and MP Bihar Hukumdev Narayan Yadav, former minister Sarjuram from Jharkhand, Dr K Laxman form Andhra Pradesh, Sudhir Muntigavkar from Maharashtra, former MP Vijay Pal Tomar from Uttar Pradesh and Hridyanath Singh from Delhi will coordinate with Op Dhankar our kisan morcha National President. Grewal told that the state coordinators of committees include Subhash Barala from Haryana, Jagtar Saini from Punjab, former minister Jairam Thakur from Himachal, Purushottam Mahajan from Chandigarh, Dr Nirmal Singh from Jammu-Kashmir and former union minister Bachchi Singh Rawat from Uttarakhand. He stated that the work on collecting iron will start on October 31 on the day of birth anniversary of Sardar Patel and will continue till Republic Day on January 26, 2014. Grewal told that bhoomi pujan will be held at the Sardar Sarovar Dam on October 31 wherein thousands will be participating. BJP Kisan Morcha National Secretary Grewal appealed people of India to come forward and contribute generously for national cause.