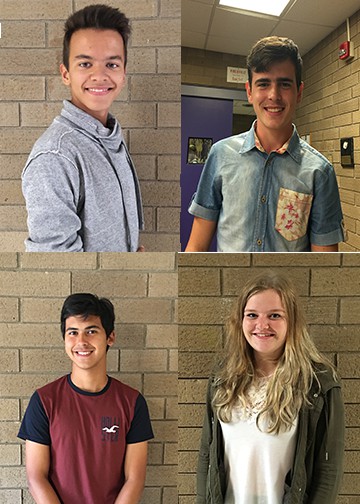 Zedler already loves SHS, and does not want to confine herself to Scottsburg. “I want to see as much of the U.S. as possible, “ said Zedler.

In the 10 months that Pellegriti will be here, he will be on the tennis team and plans on joining the swim team this winter. There has been some confusion on how to pronounce his name; the correct way to say it is Dah-vee-dah.

At the top of the list of things Valk likes about Scottsburg is the food. Outside of the many fast food chains that he loves, Valk said, “I do not like the schools glazed carrots, but I love Mexican food.”

Though he is homesick, Wouters has found friends in fellow foreign exchange students Davide and Antonio. Wouters said, “I just wanted to experience the American high school.”

For more about Zedler, Pellegriti, Valk, and Wouters look for the first issue of the Booster coming on September 23rd. 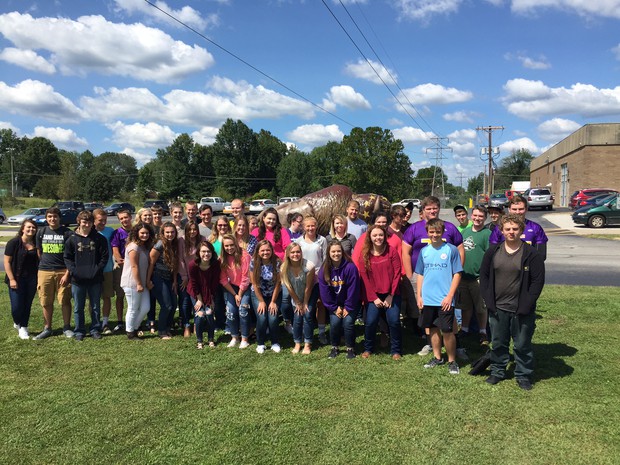 The Bisontennial Bison will be making an appearance at the Warrior Football game tonight at 7:30. The Bison came by SHS today, so the American Studies Class came out to view it. The 5th/6th period class is pictured above.

SHS would like to thank the Scott County Arts Council for bringing the Bison today.

Athletic Director Jamie Lowry, who was appointed to the position over the summer, has been developing a new idea that he hopes will get students more involved.

The Student Athletic Board (SAB), as Lowry described, is essentially “… the student council having a baby with the Athletic Department.” In short, the SAB will be made up of students who have a passion for sports but who may not have the athletic ability to be a part of them.

Those students who join the SAB would have to be role models representing Scottsburg High School and would also attend and assist during sports functions. Lowry has sign up sheets in his office and is taking applications until Monday, however, he will consider applications after the deadline. Also, both documents (the Code of Conduct and application form are linked below.)

If you have any questions, feel free to contact Lowry at jlowry@scsd2.k12.in.us

The SHS Athletic Department began an upgrade of outdoor facilities last year. David Spann field was leveled and irrigation was added in 2015. This year Bermuda grass has been added to the surface along with lights. We have worked with community support for some improvements, while others have been supported by the Scott 2 Board of Trustees.

Warrior Baseball field is undergoing the same facelift. The irrigation, surface and grass should be ready by the first pitch of the 2017 season.

SHS would like to thank the Board of Trustees, retired AD Al Rabe, Athletic Director Jamie Lowry and all of our community partners for helping provide our kids a beautiful and safe facility on which to play.