Karla is using Smore newsletters to spread the word online.

Get email updates from Karla: 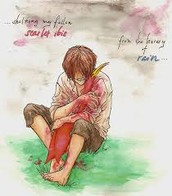 Concrete Foreshadowing Definition- Objects, people, places, colors, and events. These clues are not obvious until you look back.

"Sadly we all looked at the bird. A scarlet ibis! how many miles had it traveled to die like this in our yard beneath the bleeding tree." (Pg.322)

Setting Definition: Describes when and where the story takes place.

"It was the clove of seasons, summer was dead but autumn has not yet been born, that the ibis lit the bleeding tree. " "The flower garden was strained with rotting brown magnolia petals and ironweeds grew rank amid the purple phlox. the five o'clocks by the chimney still marked time, but oriole nest in the elm was untenanted and rocked back and fourth likr an empty cradle. The last graveyard flowers were blooming and their smell drifted across the cotton field and through every room in our house, speaking softly the names of our dead." (Pg.315)

The author describes the story's setting in a southern climax takes in where the it's the end of summer and the beginning of autumn. It's a nice cool climate where a few flowers are rotting and the last graveyard flowers bloomed, he also adds that the smell of the flowers drifted around leaving behind a scent. 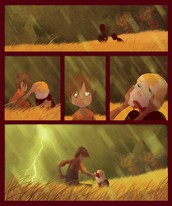 SItuational Irony Definition: An event or outcome of events opposite to what was or might naturally expected to have happened.

"He was sitting on the ground, his face buried in his arms, which were resting on his drawn-up knees." "He didn't answer, so i placed my hand on his forehead and lifted his head. Limply he fell backward onto the earth. He had been bleeding from the mouth, and his neck and the front of his shirt were stained a brilliant red." (Pg.323)

In the end when the narrator expected Doodle to come back following him when he left him, but Doodle didn't follow so the narrator went back and saw him sitting on the ground face in his arms, and he saw him bleeding for him mouth and neck, and Doodle was dead.

What type of character was Doodle?

Direct Characterization: When the author tells you what the character is like.

"He was born when i was six and was, from outset a disappointment. He seem all head, with a tiny body which was red and shriveled like an old man's. Everyone thought he was going to die-everyone except Aunt Nicey, who had delivered him. (Pg.316)

Doodle is a Direct Character, the narrator tells you how he looks in the start of the story he gives clear feature which describes Doodle.

Karla is using Smore newsletters to spread the word online.