A follower for the religion Judaism is called a Jew. Four main central beliefs/teaching for the religion Judaism are the Monotheism, following Gods law, equality and social justice, and the importance of study. Four teachings on Judaism are God created the universe, Gods creation is good, human beings are created in the image of God, and humanity should view their place in creation with love and awe. The places of warships are called Synagogues. The worship leader is Yahweh. The Holy Book name for the Judaism religion is called the Torah. The Holy days come in Autumn of the month of Tishri. One Holy day is the Sabbath. Holidays for Judaism is such as Hanukkah, and Purim. The Holy cities/Places for the Judaism are Jerusalem which is also for the Christianity, and Islam. Three more Holy cities such as Hebron, Zefat, and Tiberias.

Called a Synagogue where Jewish people pray for their religion. 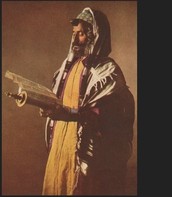 The worship leader of Judaism Yahweh. 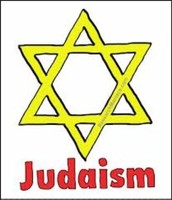 The symbol for the Judaism religion, the symbol is called the Star of David.

People praying for their religion.

Jerusalem is to be the Holy City for the Judaism, Christianity, and Islam.