In honor of April Fool's Day, the NY Times did a short piece on debunking popular misconceptions about health and science. They range from the universe's beginning, to baby teeth, to serial killers to exercise myths. Check it out here.

Research into drugs or vaccines that might work against Zika has been hampered because there have been no approved animal models in which to test them. The first new mouse model in which the Zika virus can be tested was recently identified! The virus sickens AG129 mice, which lack the genes to mount an interferon-based immune reaction, unlike normal mice who don't respond much to the virus. When infected, AG129 mice had concentrated virus in the brains and testes, reflecting the damage it is thought to cause in humans. UTMB and other institutions are now working on monkey models as well. ♧ 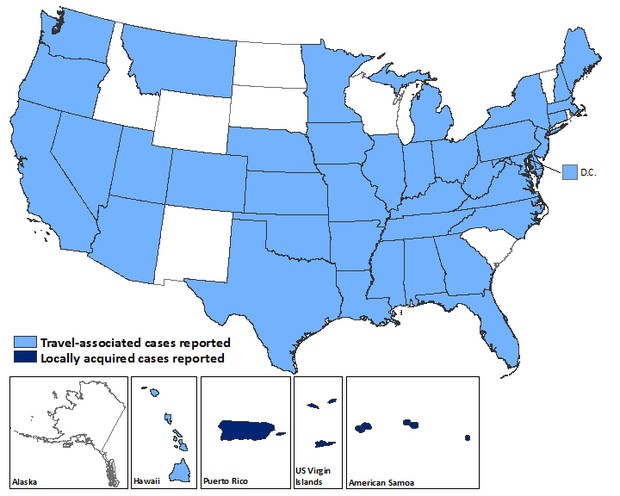 The WHO has declared Ebola officially no longer an international public health emergency. Dr. Chan, the director general of the W.H.O., called on nations that had imposed restrictions on interaction with Guinea, Liberia, and Sierra Leone to “immediately lift any ban on travel and trade.” All three countries made it successfully through a 42-day observation period and a 90-day surveillance period without any cases linked to the original transmission chain for the virus. ♧

However, only days before the announcement, Liberia closed its border with neighboring Guinea where there were at least four recent deaths from Ebola. The virus has killed about 11,300 people in Guinea, Liberia and Sierra Leone since late 2013. ♧

Despite Liberia's closed borders, a new case of Ebola was confirmed Friday, only three days after the WHO's declaration. The organization did warn that small flare-ups of Ebola were likely in the coming months because of its persistence in some survivors, and said that the three countries “must maintain strong capacity to prevent, detect and respond to further outbreaks.” The WHO has maintained a staff of nearly 1,000 in the region to help if needed. Guinean health authorities have been using an experimental vaccine in an effort to contain the recent flare-up, injecting nearly 800 people. ♧ 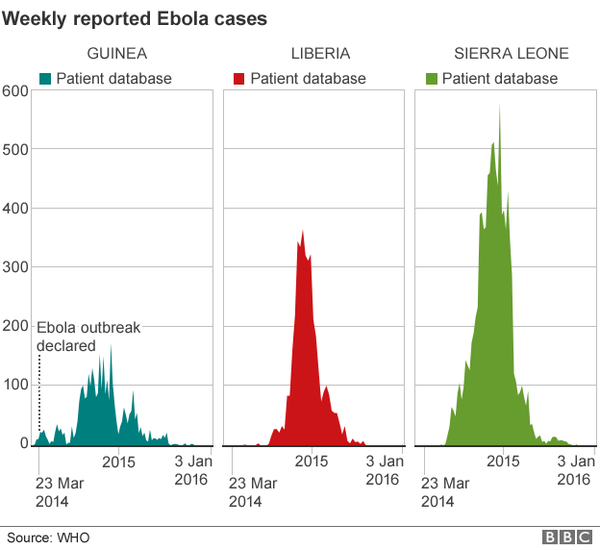 Visual Map of the Ebola Outbreak from when it was declared by the WHO to the beginning of January 2016, around when all three countries had completed the 42-day observation period.

Cases of scarlet fever have hit a 50-year high. After barely 2,000 annual cases of the highly contagious illness in recent years, there were 17,586 in England and Wales in 2015. There is no sign that the fever has developed an increased resistance to antibiotics, nor is it a virulent new strain. Overall, the reason for its return is baffling scientists. ♧

The first new TB drugs for half a century have just been developed, and it is hoped they will be effective in treating patients who have developed resistance to existing drugs or cannot handle the side-effects. Nearly half a million of new TB cases per year are drug-resistant. Tuberculosis is the most deadly infectious disease in the world, killing 1.5 million people each year. Multi-drug-resistant tuberculosis (MDR-TB) drugs can have serious side-effects, including hearing loss and psychosis. Unfortunately, globally, only 2% of people with the severest MDR-TB have access to the new drugs, according to MSF. Price is prohibiting access, particularly with one of the drugs, delamanid. ♧

Fortunately, GlaxoSmithKline is looking to lower drug prices in poorer countries. They are waiving patent protection for new drugs in the world’s poorest nations, such as Afghanistan, Rwanda and Cambodia, allowing cheaper generic versions to come on the market without the threat of legal action. The measures will affect 85 countries, helping more than 2 billion people, and benefit Africa most. ♧

Unicef is considering using drones to address the HIV epidemic in Africa by transporting medical tests and blood samples from rural clinics to laboratories, avoiding the rutted roads that make even short journeys uncomfortable and unpredictable, partly because of fuel costs and a lack of motorbike drivers. They were recently tested in Malawi, becoming the first known use of unmanned aerial vehicles on the continent for improvement of HIV services. ♧

Last September, 267 leading economists signed a declaration calling for universal healthcare as an essential pillar of development. The Ugandan Parliament is now due to debate a bill that was originally created in 2007 to pave the way for legislation to introduce national social health insurance, as a first step towards universal healthcare. Currently, nearly 23% of households spend more than 10% of their total household income on healthcare. About 4.3% of Ugandans are impoverished annually due to out-of-pocket health payments. ♧

burundi in the headlines

The European Union plans to cut back its funding for Burundi's peacekeeping contingent in Somalia to try to force President Pierre Nkurunziza into talks. For each African soldier sent to Somalia, the contributing government receives $1,000 a month for wages and logistics, paid for indirectly by the EU. In Burundi's case, the government keeps $200 a month and soldiers receive $800 each. The EU is hoping Bujumbura’s 5,400-strong contingent -- which earns the state roughly $13 million a year -- may be the Achilles heel of Nkurunziza's reluctance to have effective peace talks. Only the government's portion of this funding will be entirely scrapped, not the soldier's pay. ♧

On Friday, The United Nations Security Council asked U.N. Secretary-General Ban Ki-moon to provide options within 15 days for the deployment of a U.N. "police contribution to increase the U.N. capacity to monitor the security situation, promote the respect of human rights and advance rule of law" in Burundi. ♧

On Saturday, only a day later, Burundi accepted the United Nations security council's resolution to send in police. Some, however, are criticizing the resolution for failing to call for the deployment of peacekeepers. ♧

On a different note, The Guardian published a fun piece on Women's soccer in Burundi, and how it's offering women a way to earn respect and good money. In December, Burundi joined Fifa’s Live Your Goals scheme, a four-year program to encourage female soccer players, improve the quality of the game and give women more opportunities, both on and off the pitch. One young women says soccer really encourages women to get out of the house and work. “It’s great for your body to get fit, but it’s also good for the development of the country,” she says. One player's father remarked, “Fifteen years ago, if a girl played football, you would say she’s a disgrace to the family. Today, it’s normal.” His daughter spoke at the annual meeting of the International Olympic Committee women in sport commission last November, reporting how sport is a powerful tool for achieving irreversible, substantive gender equality by 2030, as set out in the Sustainable Development Goals. ♧ 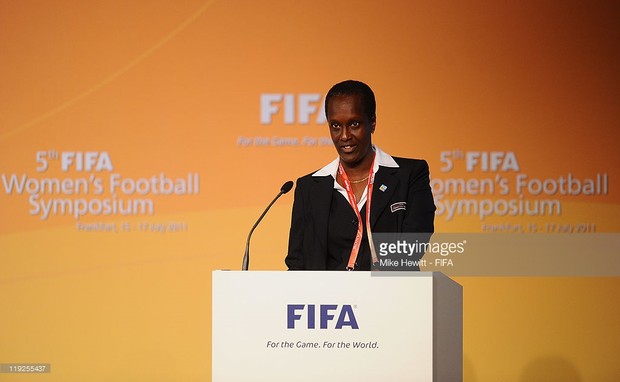 Bioengineered skin complete with functioning hair follicles, glands and nerves has been grown! This technique could transform burns treatment and end cosmetics testing on animals in places where it still isn't illegal! ♧

Have a lovely week. I'll see some of you Thursday :)