becca is using Smore newsletters to spread the word online.

Get email updates from becca:

It was the year 1931 and the great depression had just begun, nine boys where hitch hiking a train to Alabama when a gang 4 white men tried to throw the boys off. in the end the 9 boys won and pushed the white boys off. the white boys then ran to the station manager who then stopped the train. when the train came into the station a group of armed guards where waiting for the 9 black boys. later two women where found on the train dressed as men the women then claimed that the boys raped them. the boys where then sentenced to a death trial instead of just assault 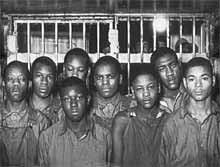 at the firs trail in scottsboro Alabama the boys where convicted of raping the girls even though there was no connection between them. the boys where all sentenced to death except the youngest boy (Roy wright) who was 12. then the case was taken up by another court. so the boys waited in jail for their next trial. that's when the communist party stepped in and tried to help the boys. in the end one of the girls came in to the trial and confessed that they had lied about the boys raping then but the boys where still sentenced to jail. 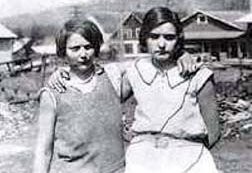 the Scottsboro trail was the most retried most re convicted re sentenced trial of all time. after the girl testified the boys still went to jail, the oldest boy was in jail until 1950. the youngest boy (Roy wright) later in his life went crazy and shot his wife then killed himself. most of the boys went to live semi normal lives. Bates (the one who testified) later served for the communist party giving speeches and and presenting herself in public. she then got married and changed her name to luicell. her husband died in 1971 then she died a week later.
Scottsboro trials

becca is using Smore newsletters to spread the word online.

Follow becca rackham
Contact becca rackham
Embed code is for website/blog and not email. To embed your newsletter in a Mass Notification System, click HERE to see how or reach out to support@smore.com
close