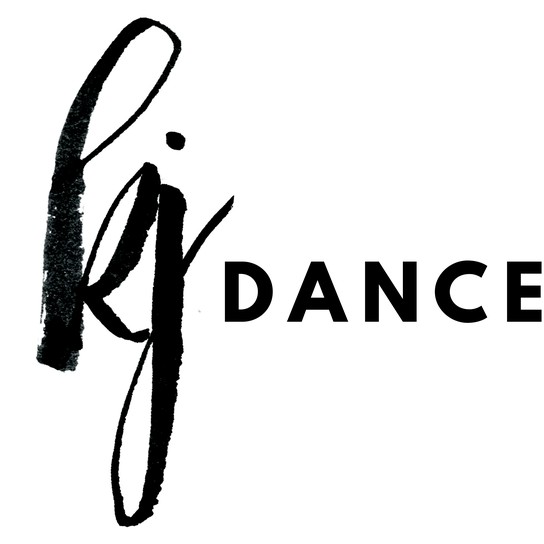 Get email updates from KJ: 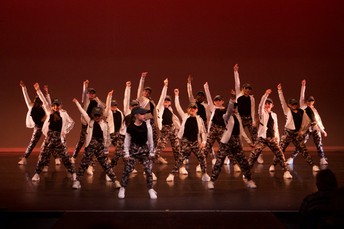 WE ARE SO EXCITED TO ANNOUNCE SOME NEW EXCITING TEACHERS FOR BOTH OUR HIP HOP INTENSIVE AS WELL AS THE FALL OF 2019 - 2020 AT KJ!

WHO: Open hip hop fanatics auditioning for the VIBE Crews at KJ as well as non auditioning DFW dancers who only wish to participate in the intensive classes. Ages 6 and Up

WHAT: KJ's premiere summer hip hop intensive for dancers looking to specialize in hip hop. Intensive classes will focus on the techniques and skills needed to be a successful hip hop dancer and performer. This is the ULTIMATE Hip Hop Dance Training Experience in DFW. Be prepared to be challenged by innovative and industry leading master hip hop instructors. The Summer Hip Hop Intensive will allow dancers to experience the daily training environment and expectation level required at the next level.

AUDITION EVALUATIONS: The Intensive also serves as the audition for the 2019-2020 season for the VIBE CREWS. KJ faculty will evaluate auditioning candidates during this three day intensive for placement in 2019-2020. Participation in the Hip Hop Intensive is required for dancers who wish to be considered for our VIBE CREWS.

Following the Summer Hip Hop Intensive, all dancers will receive a recommendation for fall class placement and/or an invitation to join us as a member of one of our VIBE CREWS at KJ. The KJ faculty will evaluate auditioning dancers in a variety of areas over the course of the Intensive. Placement for 2019-2020 and invitations into VIBE will be sent to auditioning dancers on August 2nd. All dancers who are auditioning for a competitive track program for the 2019 - 2020 season MUST COMPLETELY FILL OUT AND SUBMIT the 2019 - 2020 INTENT TO AUDITION FORM prior to the first day of the intensive in which the dancer will attend.

Dancers with interest in auditioning for one of our VIBE HIP HOP CREWS must be prepared to: *Train a minimum of 4 hours a week beginning Fall of 2019. *Attend 4 convention/competitions with possible travel required. *Attend weekend rehearsals & choreography when scheduled. *Attend Choreography sessions beginning August 5th. 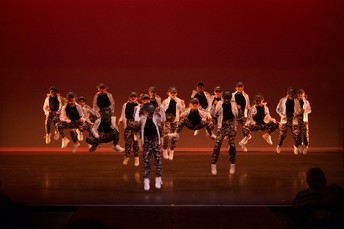 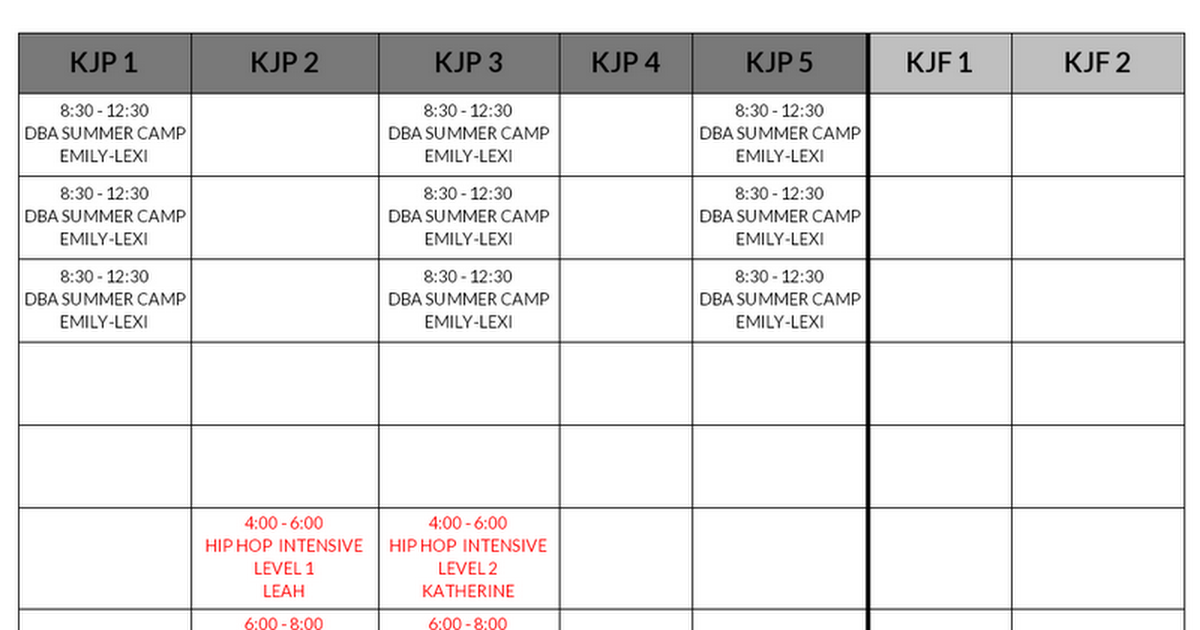 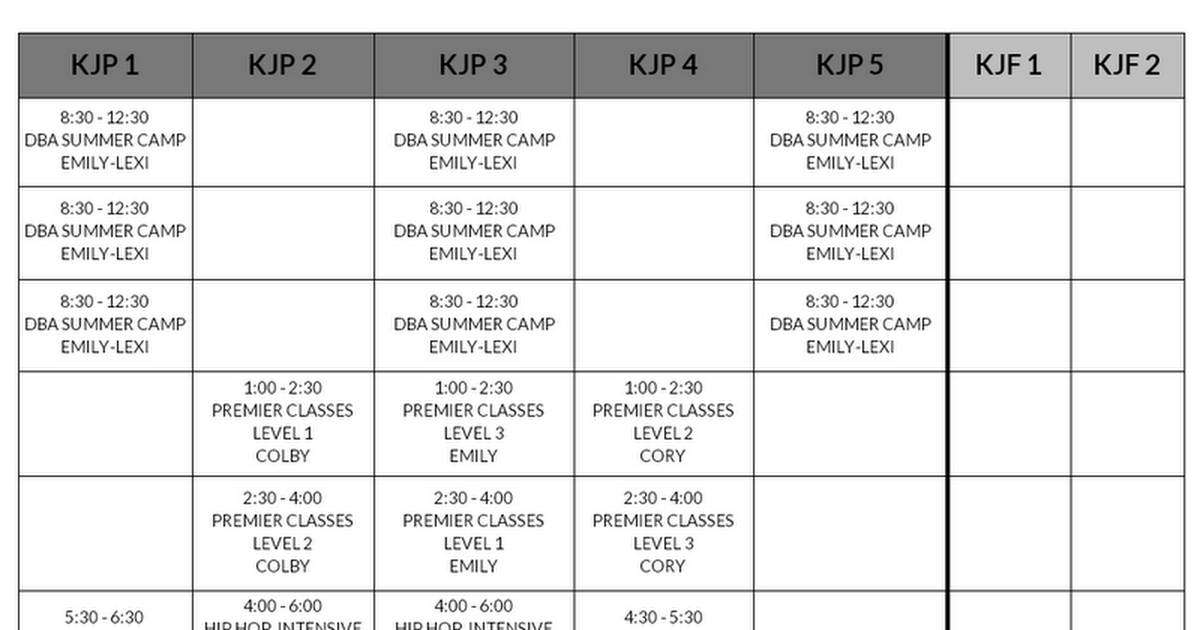 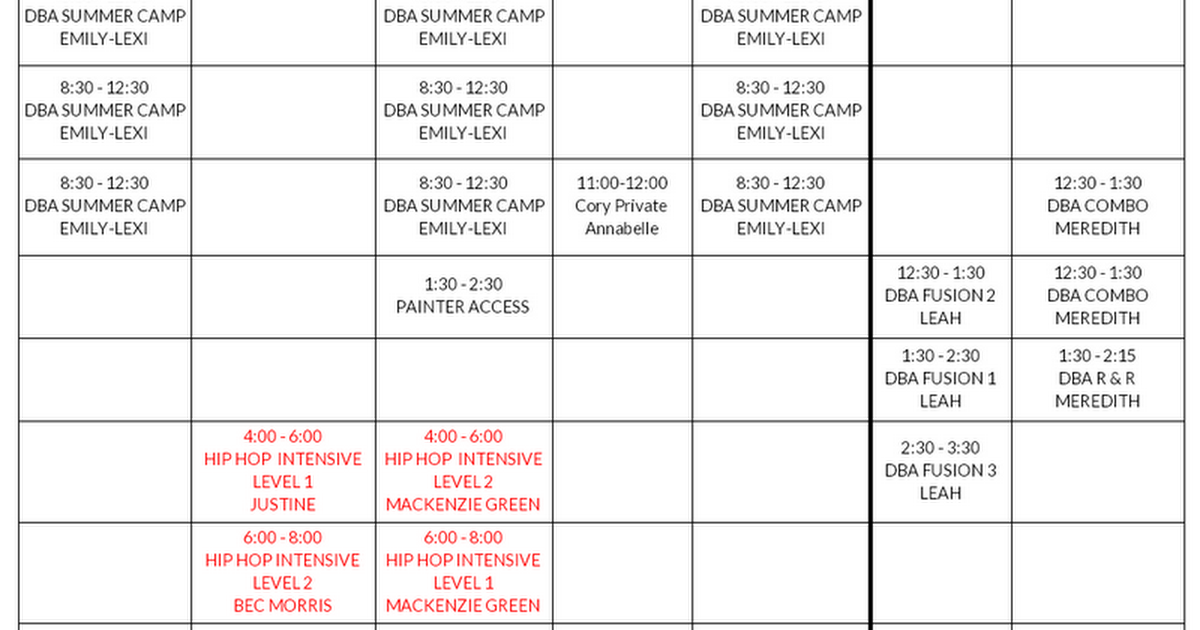 WE ARE SO EXCITED TO WELCOME NEW AND RETURNING FACULTY MEMBERS TO THE INTENSIVE, CHOREOGRAPHY WEEK, AND FALL CLASSES FOR OUR VIBE CREWS! 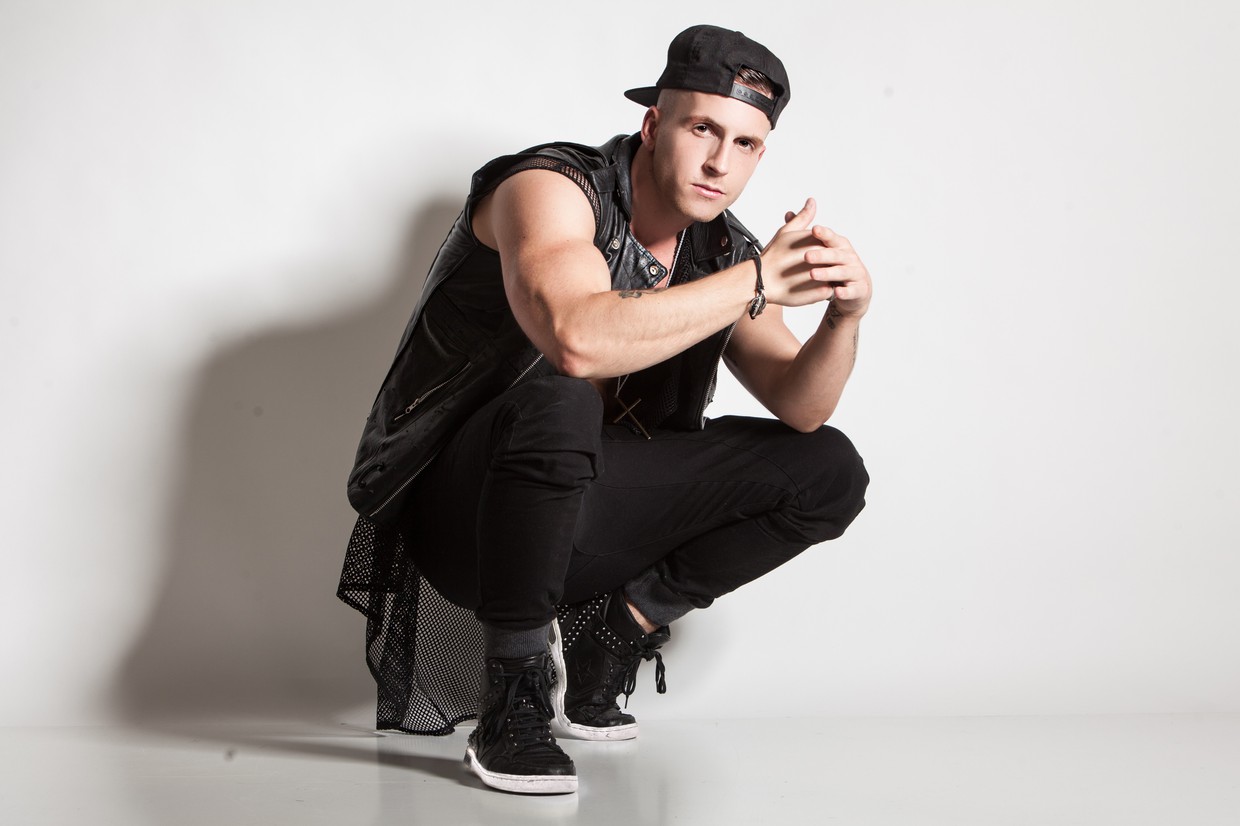 Currently residing in Los Angeles, CA, Mackenzie Green has always had a tremendous amount of love and passion for dance, which has lead him to his success and imprint in the entertainment industry. Originally from Regina, Saskatchewan, Mackenzie gained a strong foundation in Jazz, Ballet, Contemporary, Lyrical, Acrobatics, Hip-Hop, Musical Theatre and Tap. Soon after, Mackenzie moved to Vancouver, BC, where he first began his professional career as a company member of MOVE: The Company and Kinesis Dance Somatheatro, where he toured throughout Canada, The United States, and Europe. 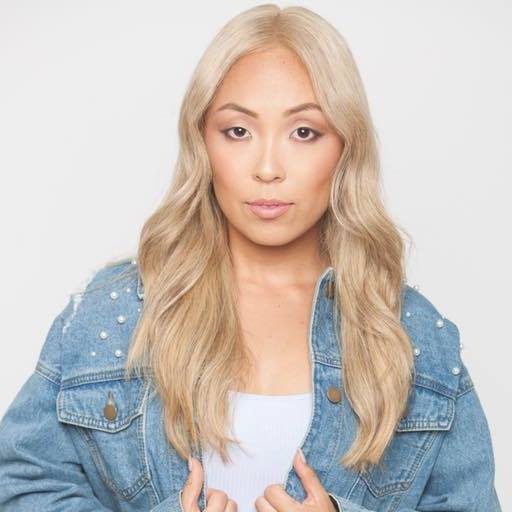 Bec Morris is a professional dancer and choreographer currently based in Sydney, Australia.

Bec graduated her full-time course at Brent Street in 2010 and has trained in many styles including classical, tap, musical theatre and contemporary, however specialises in hip hop and jazz.

Bec Morris has had the pleasure working with some incredible artists such as Justin Bieber, Little Mix, Jessie J, Redfoo, LunchMoney Lewis, Aston Merrygold, Charli XCX, Kelly Clarkson and Flo Rida. She has also appeared, as a dancer on television shows; X-Factor, Australia’s Got Talent, the Logie Awards and Dance Academy series and recently released movie. 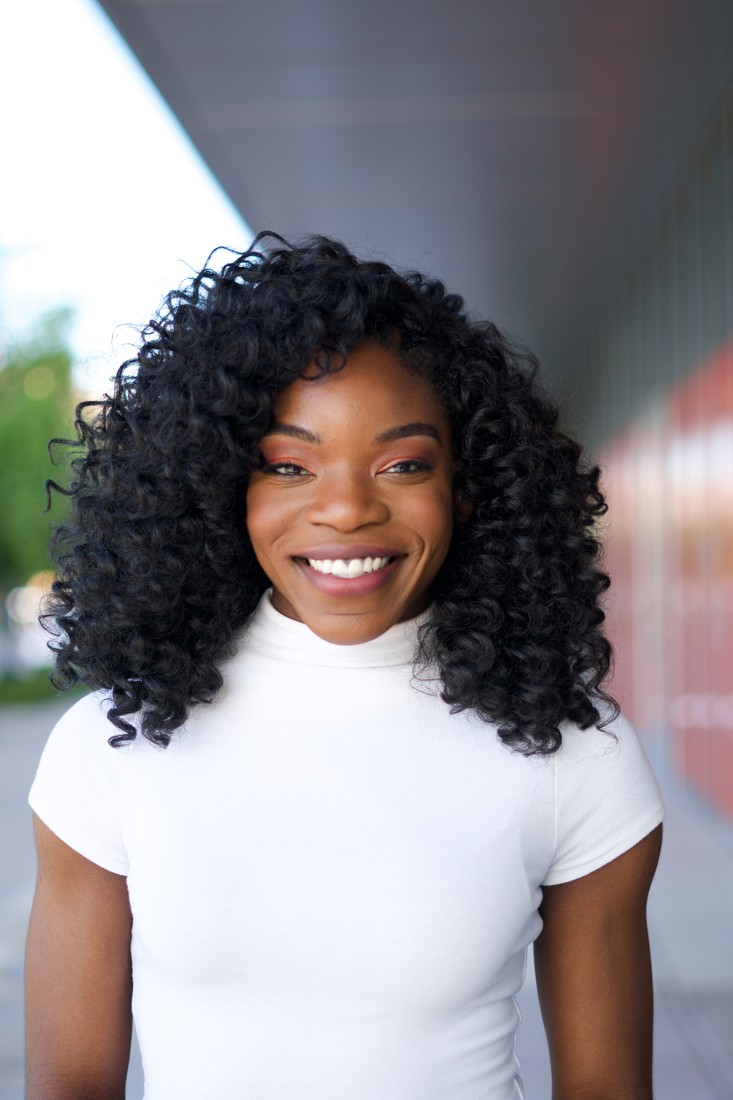 Katherine Iheke is a 28-year-old Dallas native who discovered her passion for dance in the early summer of 2010. Her growing desire to learn more about her new found movement led her to Plano, TX where she began to train in her expertise style, hip hop, under Fenton Fulgham. Although she has only been dancing for 8 years, her work ethic and focus has helped her level up faster than most starting dancers. She soon became an instructor at Fenton’s Dance Factory, which then opened up the opportunity for her to help co-direct the F-Troop competition teams. Katherine has been apart of Renegades Dance Company since its establishment in 2013 and had the opportunity to direct the team in 2016 and 2017. She was nominated and casted in the 2017 Monsters of Hip Hop Show “Unleashed” in Los Angeles. Her attendance to many workshops and conventions has given her opportunities to learn from and train under choreographers such as Rhapsody James, Jamal Sims, Nick DeMoura, Tony Tzar, Laura Edwards, and many others. As of now, Katherine teaches various open classes, workshops, and intensives around the area while teaching on tour with the dance convention, Dance Revolution and touring with Monsters of Hip Hop. Even though she loves to challenge and excite others with the diversity of her choreography, her main focus is to help others live and dance with passion & purpose. 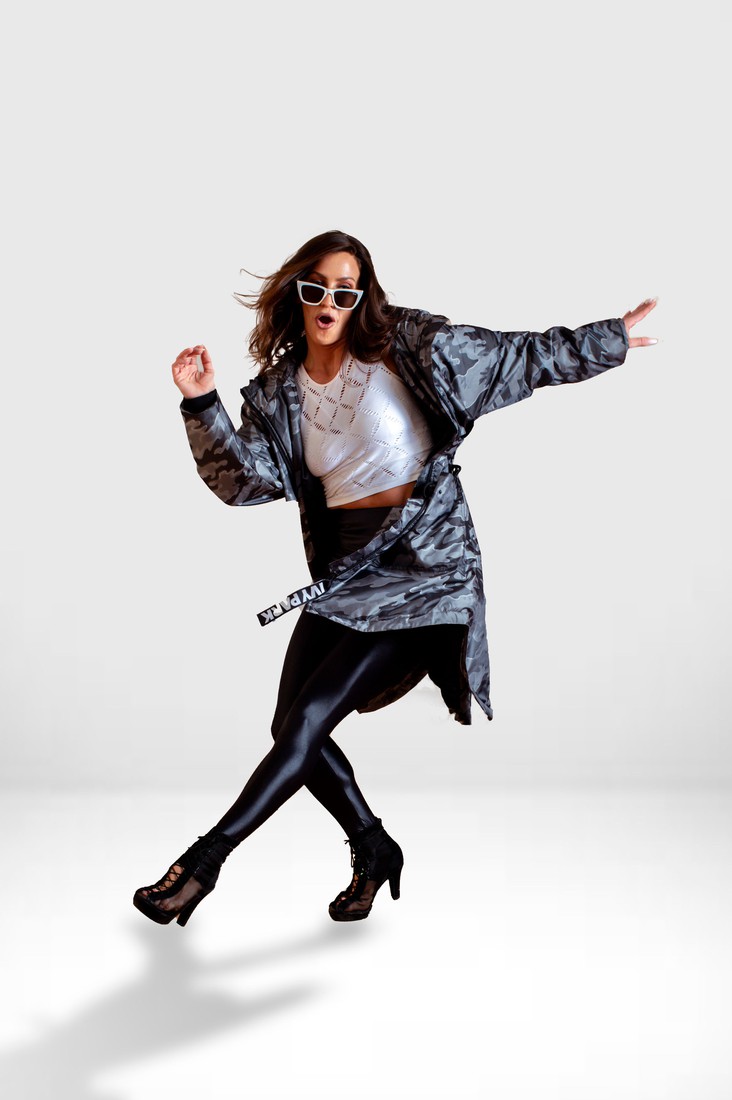 Leah Mitchell is from a loving, supportive family of six, and a dancer born and bread in Plano, Texas. Here is where she began developing her love for dance (age, two) at the prestigious KJ Dance of Plano, where she was a devoted company member and multi-nationally ranked competition dancer. The training, love and support she received from Kristy Blakeslee, Audrea Cowan and her staff of dedicated, proficient instructors (combined with her own dedication, tenacity, and passion for dance), led her to her desire to further her education, and became the recipient of a dance scholarship and conclusively a BFA from Southern Methodist University.

While studying at the University, she worked with and performed works by Robert Battle, Jessica Lange, Ohad Naharin, George Balanchine, and The Martha Graham Dance Company. Before graduating, she had already began her professional career as the assistant choreographer and principal dancer for an off broadway production tour of Symphony on the Dance Floor, where she travelled the nation and performed at the critically acclaimed BAM (Brooklyn Academy of Music) in New York city. During the summers she worked/performed industrially as a dancer for Mary Kay Cosmetics and Sally’s Beauty Supply.

Post graduation, she continued her education with invitations to company mentorship programs, such as; Dana Foglia’s International Dance Intensive, San Francisco Conservatory Summer Program, & Bacheva Dance Company Summer Intensive. She has toured internationally with a number of national dance companies and touring productions. She recently returned from a tour in China with Daniel Ezralow’s* international Modern dance company PEARL, where she was the dance captain and Principal dancer of a show commissioned by the Chinese Government. *Daniel Ezralow Choreographer known for Katy Perry, Beatle’s movie Across the Universe.

Professionally, Leah is represented by the Top dance Agency, Bloc Talent Agency in Los Angeles, California, and is a working member of the SAG/AFTRA Union. Her most recent projects include working with artist, such as KATY PERRY, Adam Levine, Mary J. Blige, Pit Bull, and Paula Abdul. She has performed in the 59th GRAMMY Awards, Latin American Music Awards, and annual ARIA + Venetian NYE Shows in Vegas. You can watch her featured on episodes of Castle, Black-ish (Season 2 Finale with P. Diddy & Mary J.Blige), Dallas Cowboys’ Cheerleader Making The Team, and seasons 9 & 10 of So You Think You Can Dance. She was featured in movies like Scary Movie 5, and commercials for The Greatest Showman, McDonald’s (with Mindy Kaling), Apple, DELL and Toyota.

Leah is passionate about teaching/choreography & sharing her love for dance with aspiring young artist. She is so happy and proud to be apart of the KJ Dance Family Legacy, and excited to positively develop and inspire the talent of young dancers, so they too can grow up with the confidence, kindness, and determination to do what they love and achieve their hopes and dreams, whatever they may be… the way KJ did (and still does) for her! 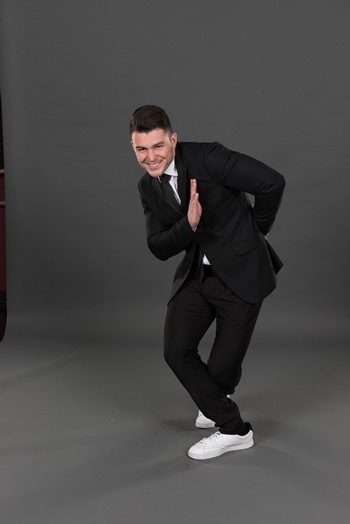 These three elements form the foundation for the hip-hop dance career of Ryan Warren. Falling in love with the art at the age of five while learning the choreography to Michael Jackson’s hit song “Beat It”, Ryan’s desire to be a student first and grow in his craft has paved the way for a hobby to become a lifestyle.

After training first in Dallas, Texas, and then later in New York and Los Angeles, Ryan began teaching at the young age of 16. His choreography didn’t remain confined to the dance studio though. With skillful musicality and a diversity of styles that set him apart, Ryan was soon teaching master classes across the United States, while also performing with popular artists including Destiny’s Child and Carrie Underwood. He was a featured dancer in the original music video for “You Are for Me” by Christian recording artist, Kari Jobe, has appeared in several popular YouTube commercials, and made cameo appearances with musical artist Britt Nicole. In addition, he has choreographed for television shows like Barney the Dinosaur, collegiate dance teams such as Kansas University and Missouri State, and multiple NFL Cheerleading organizations including the Dallas Cowboys Cheerleaders and Kansas City Chiefs Cheerleaders.

Because of his passion to continually develop young artists, Ryan has served as creative director and choreographer for several National Tours. He has also been affiliated and taught for many dance conventions including The Adrenaline Dance Convention, Dance Revolution, The Drop Off, Urban Legends and Cre8tion Dance.

Ryan currently teaches hip-hop for the Dupree Dance Convention and is the staff choreographer for Gateway Church where he has choreographed large-scale musicals including, Fiddler on the Roof, Godspell, and Truthical. He also continues to travel across the country teaching Master Classes and choreography for local studios and dance teams.

Ryan’s desire and goal is to inspire each of his students to break through any limitations they have placed on themselves and help them on their journey to becoming the well-rounded dancer they were created to be! He believes there is a confidence, strength, and freedom which only dance can cultivate and loves to see his students develop movements they never thought possible.

Ryan resides in Dallas, Texas, with his wife, Amy, and two kids, Brooklyn and Hero. Ryan gives all praise and thanks for his dance career to his Lord and Savior, Jesus Christ. Every movement is a gift from Him and without Jesus, Ryan is nothing. 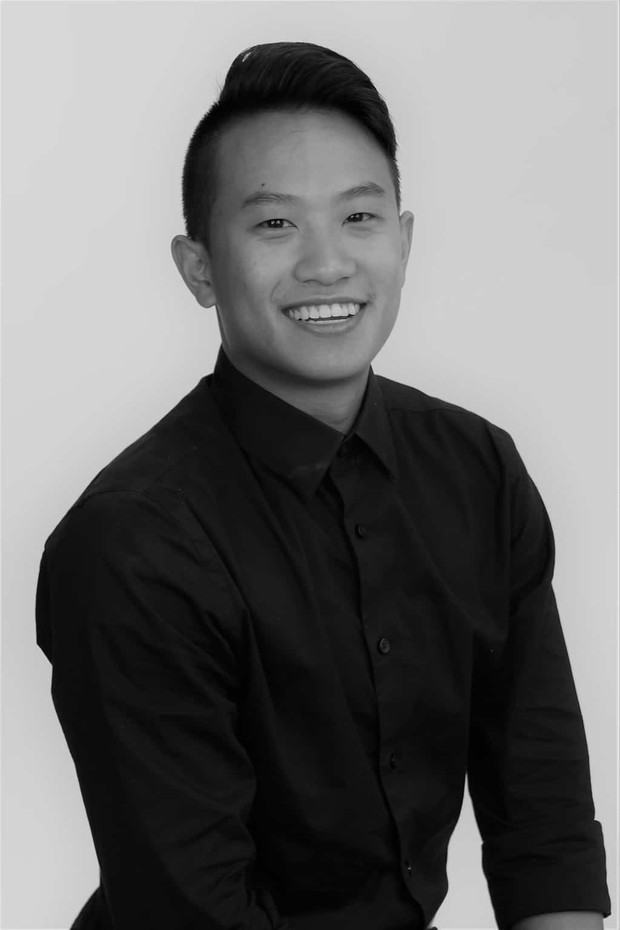 Allen grew up in Nederland, Texas and began his passion for dance in high school. A graduate of Texas A&M University with a degree in Mechanical Engineering, dance still has his heart and he joined Footlights this year as a Hip-Hop instructor. Allen has won several awards and scholarships at dance conventions and was a member of the Fade to Black Hip Hop Dance Ensemble at Texas A&M. While in college, he also taught and directed a Hip-Hop team at Suzanne’s School of Dance in College Station. 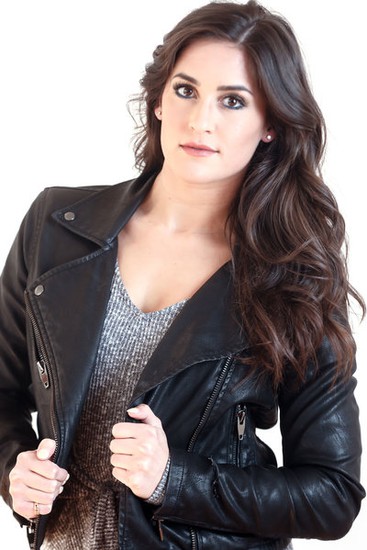 Rachel’s dance career began at KJ when she was only three years old. She is trained in all styles of dance and has been a part of the KJ family for her entire life! In addition to dance, she has nine years of competitive gymnastics experience and she was the captain of her cheerleading squad at Plano Senior High. Rachel continued her dance career in college as a member of the Texas Tech Pom Squad where she had many performance opportunities including: the Shanghai Tourism Festival in Shanghai, China; Dallas Cowboys halftime performances; Big 12 Basketball Tournament in Kansas City, MO; football games in West Virginia, Austin, Houston, Fort Worth, and Dallas; NDA College Nationals in Daytona Beach, Florida; Pro Action Professional Dance Workshop in Las Vegas, NV. Rachel’s last year on Tech Pom was historic as the team won their first national championship in program history in the NDA Jazz D1A division. She graduated from Texas Tech Magna Cum Laude and as a National Champion. Rachel is currently continuing her dance career in her third season as a Dallas Cowboys Cheerleader. 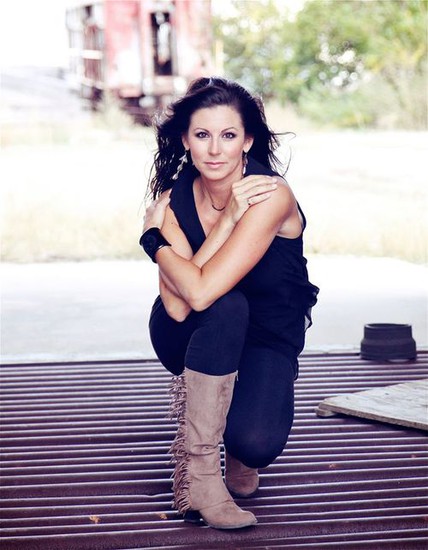 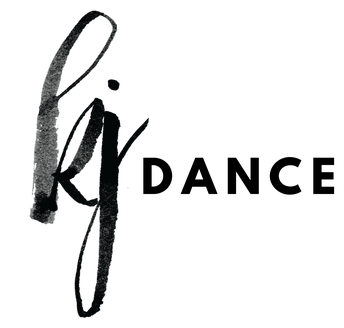 KJ provides a safe nurturing environment where dance is the vessel by which a child can gain self esteem and valuable skills including teamwork and leadership. Our program teaches honesty, integrity, loyalty and dedication through the art of dance. It is our desire to train dancers that exemplify grace, poise and selflessness.