Will the women's times equal to men's?

Will the women's times equal to men's?

Goal to figure this out...

The goal for this project is to find what year the women's medalist time could be the men's medalist time, in your selected Olympic sport. To find this you're probably wondering how I did it, so I'll tell you. First I picked my sport, then I recorded the year and time from 1976-2012 (only gold medalist). I had made a graph that shows the men's and women's times over the years on my calculator. I had then created a line of best fit, I found the equations for both X and Y lines and graphed those, then I found my intersection

Women started off being really fast at the double schools (2X). But then men's time started to grow faster, both men and women's times are staying in the same rate. The year 1998 (x-coordinate), was the year that women's Double Skulls (2X) would finally be equal to the men's. From the graph we are increasing, but still staying in the same range. 1998 wasn't a Olympic year, so the men could have still be in the women int 2000. The fastest time for men and women in 1988 would be 383.48 seconds! Which also means 6 minutes and 23 seconds(Y-coordinate). Into thousand the men won and beat the women's division medalist time.

Photos of the Double Skull (2X)

The boats are very small!

This was in the London Olympics

Where you can find things about the sports history... 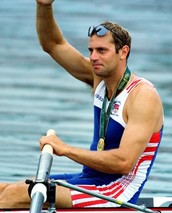 The double skills (2X) started in 1976, with both men and women. The women started off amazing, with such times as three minutes and 16 seconds this time was made by Laurisa Aleksandrova and Yelena Khloptseva from the URS. But then the times had started to slow down and the men started to have faster times than the women. The athlete of the century is "Sir Steve Tedgrave" of Great Britian. He is a six time world champion and he has won gold medals at five Olympic Games. In 1896, the Athens Olympic Games had trouble on their competing days because of stormy weather, so they had many delays.

@Doubleskull2Xolympics
Be sure to watch this Olympic sport at the next games, it is a very fun sport to watch with action and heart.
Olympic Games olympic.org/canoe-sprint