An Introduction to the Cold War

An Introduction to the Cold War

During WWII, the United States had fought alongside the Soviet Union, but tensions ran high. For one, the U.S. was wary of the Soviets' Communist government and leader Joseph Stalin's cruel and tyrannical rule over his own people. The Soviets were offended by the United States' refusal to acknowledge them as a legitimate world power as well as its late entry to WWII, a decision that had cost millions of Russian lives. Following the war, this mutual resentment escalated to a global atmosphere of distrust and hostility with postwar Soviet expansion and American intervention in international relations.

After WWII, the United States' primary plan for rebuilding western Europe was called the European Recovery Program or the Marshall Plan. The plan, which provided billions to European countries, attempted to make communism less appealing in western Europe.

As the U.S. became increasingly concerned with Communism, it adopted the policy of containment, or the idea to stop Communism from spreading. Specifically, in 1947, President Truman announced the Truman Doctrine which stated that the United States would "support free peoples who are resisting attempted subjugation by armed minorities or by outside pressures."

The United States established the North Atlantic Treaty Organization, or NATO, with the non-communist European countries as a force against the Soviet nations of Eastern Europe. The Soviets' response came in the form of the Warsaw Pact which was an alliance of communist nations. 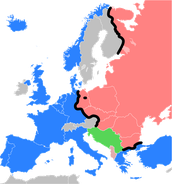 In 1946, Winston Churchill famously stated that "an iron curtain has descended across the continent," a phrase that went on to define the global division during the Cold War. The phrase was accurate in that Europe really was divided into the Communist East and the Democratic East by the conflicts of the U.S. and the U.S.S.R.

Most notably, following WWII, Germany was partitioned into four territories for the Americans, the British, the French, and the Soviets, but the territory was generally considered to be divided into the east and west, as well. The capital of Berlin, which was located deep in the Soviets' territory, was also divided into four territories, but the Soviets cut off all highways, roads, and canals into West Berlin, hoping to drive the powers out of the city. In response, the U.S. and its allies sent supplies by air under what came to be known as the Berlin Airlift. The effort lasted over a year and carried over 2.3 million tons of cargo.

Although the U.S. and the Soviet Union never actually declared war on each other, armed conflict occurred during the Cold War in the form of proxy wars instead. In these proxy wars, the two powers aided other nations in their own ideological wars.

The earliest example of a proxy war came in the form of the Korean War in 1950. In this war, the U.S. helped the democratic South Korea when the Soviet-backed, communist North Korea invaded. After the North Korean forces were pushed back to the Korean Peninsula's border with China and the Chinese attacked, a cease-fire was called, dividing the nation at the 38th Parallel.

Back at home in the United States, the fear of communism escalated into a Second Red Scare. The panic was only further fueled when Senator Joseph McCarthy began to accuse people of being communists or communist sympathizers. McCarthy also warned that communists had infiltrated the government. The accusations led to civil rights violations and an overall atmosphere of unease and distrust.

Another conflict in the Cold War was known as the Space Race. This was the competition between the two powers to prove the superiority of their technology, military firepower, and political-economic systems. The Space Race was sparked by the Soviets' successful launching of the first satellite, Sputnik I. In response, the U.S. launched Explorer I and founded NASA. The race was eventually "won" by the U.S. with the landing on the moon.

The tensions of the Cold War were further heightened by the international diplomacy crisis known as the U-2 Incident. In May of 1960, the Soviets shot down an American U-2 spy plane, and with the capture of pilot Francis Powers, the U.S. was forced to admit to spying on the Soviets. Powers was sentenced to 10 years in jail, but after two years, he was released in exchange for a captured Soviet spy.

During the Cold War, the Soviets became increasingly influential in the Middle East following the supply of weaponry to Egypt by communist countries. In response, President Eisenhower declared the Eisenhower Doctrine which promised military or economic aid to any Middle Eastern country against communist aggression. The pronouncement was hardly a new idea as it simply extended the policy of containment.

During the Cold War, the United States did not always support moral regimes, prioritizing the containment of communism. One such example was Batista, the dictator of Cuba. In 1959, during the Cuban Revolution, Batista was overthrown by Fidel Castro, a communist. Thus, Cuba, a country only 90 miles from the U.S., had fallen to communism.

In response, the American CIA trained and armed Cuban exiles, and on April 17, 1961, 1,500 Cuban exiles attempted to overthrow Castro in what became known as the Bay of Pigs. The attack was a disaster and many of the rebels were held for ransom.

The conflict in Cuba escalated in the Cuban Missile Crisis, which was the closest that the world came to a nuclear war. In the crisis, it was discovered that the Soviets had placed nuclear missiles in Cuba. President Kennedy ordered a blockade, but the world watched with bated breath until the Soviets eventually removed the missiles. This crisis is often considered the best example of brinkmanship, a foreign policy practice in which a party forces interaction to the point of confrontation in an attempt to gain an advantage over the other for negotiation. 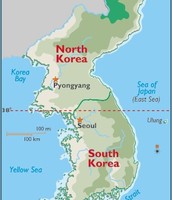 Map of the Korean Peninsula

The Korean War never officially ended. The fighting stopped in 1953 with a ceasefire, and the peninsula was divided at the 38th parallel into communist North Korea and democratic South Korea. Both countries have soldiers armed and posted at the border 24/7. 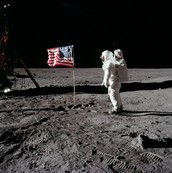 Buzz Aldrin on the first walk on the moon.

The Space Race was just one point of competition between the Americans and the Soviets. Following the Soviet launching of Sputnik I, there was a surge in the American space effort. Finally, in 1969, the U.S. "won" when the first humans set foot on the moon.

A sharp change from Cuba under Batista, the Castro regime allied with the communist Soviet Union. This alliance and the Cubans' resentment of the U.S. following the Bay of Pigs led to the Cuban Missile Crisis in 1962.