The Brief Tale of Ceyx and Alcyone

King Ceyx was in love with his wife, Alcyone. She was the daughter of the King of Winds. They were inseparable. Ceyx decided he wanted to go on a voyage across the sea. Alcyone was very grieved when he left and prayed religiously for his return; little did she know that he had drowned as a result of his ship sinking. Juno was touched by Alcyone&apos;s consistent praying and sent her messenger, Iris, to deliver the news of Ceyx’s death in a dream. When Alcyone went to the shore where Ceyx departed, his dead body washed up to shore in front of her. Rather than sinking into the waves, she began to fly like a bird. The gods were kind and changed Alcyone and Ceyx into a bird and their love was unchanged. They can always be seen flying together. Every year, there are seven days that the sea lies still and calm. During this time, Alcyone is brooding over her nest that is lying on top of the sea. The charm is broken once the eggs are hatched. These seven days are known as Alcyon days.

This ship represents Ceyx's ship after it had sank and he died.

Alcyone is holding Ceyx after he washes up on shore in front of her.

These two birds represent Ceyx and Alcyone's love after they had been transformed. 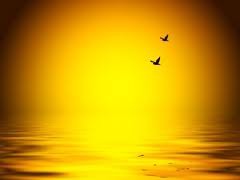 This represents Ceyx and Alcyone watching over their nest for seven days, causing the waters to be calm.

Follow Madison Godfrey
Contact Madison Godfrey
Embed code is for website/blog and not email. To embed your newsletter in a Mass Notification System, click HERE to see how or reach out to support@smore.com
close