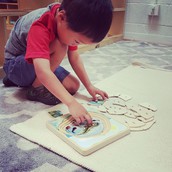 Program Days: 3 half days up to 5 full days

After Care: Free, Drop off from 7 am and pick up as late as 6 pm

The world is changing, and if we want to give our children an advantage for their future we need to think ahead. One skill that will give them leverage in the future job market is languages. If they can read, write and speak in the three most spoken languages in the world they are going to have a competency that no other children possess. Research shows that students gain additional cognitive, academic and employment benefits. Fully proficient bilinguals outperform monolinguals in the areas of divergent thinking, pattern recognition, and problem solving.

Montessori is an educational pedagogy that focuses on the individual child and his needs. The concepts behind the pedagogy were consolidated by Dr. Maria Montessori in the beginning of the 20th century. Her concepts in regards to teaching children based on their needs and personal interest lead to the Montessori educational method of today. There are four areas of learning in a Montessori 3-6 class:

Practical Life
In this section of work, the child finds materials and Exercises of his every day life from pouring water from a jug to a glass, or learning how to tie a shoelace. These activities help the child to properly take care of himself so that he may feel as though he is independent and does not have to rely on an adult for his basic needs.

Sensorial
Activities in this section allow the child to refine each of his senses. He will become a child who can appreciate color or texture differences, organize his thoughts and objects in his environment and who has a refined sense of pitch from the music he may hear around him.

Language
The child is taught language through a specific progression of lessons where he first becomes aware of the different sounds in a word. The child then learns the language phonetically until the point where he is taught the different “rules” in a given language and the exceptions to those rules he will need to know in order to spell and read fluently.

Mathematics
The child first learns to count from 1-10 through the understanding of the concept that those numbers represent a specific amount. Through each material, the child will learn addition, subtraction, multiplication and division and truly understand what each one means in their deeper sense. Through this method of teaching, Montessori offers the child a strong and solid foundation in the understanding of mathematics.

Overall, what makes this method of learning so different compared to the conventional form of education we have today, is that the teacher does not stand in front of the class and teach each child the same lesson all at once. Each child is allowed to learn at his own rhythm in a way where he feels as though he is in fact not learning or being taught.

Montessori called this way of teaching “preparing the child for success”. The teacher is there to guide the child through small Exercises in which the child will succeed. Through time, the Exercises rise in difficulty but because the progression is so well thought out, the child never feels as though learning is a struggle.

Follow sean diana
Contact sean diana
Embed code is for website/blog and not email. To embed your newsletter in a Mass Notification System, click HERE to see how or reach out to support@smore.com