Get email updates from Garrett:

Ruler of the Underworld

Ruler of the Underworld

The tale of Hades as told in Greek Mythology

-"...son of the Titan Cronus and Rhea, and the brother of the deities Zeus, Poseidon, Dementor, Hera, and Hestia."

-"After Cronus was killed, the kingdom of the underworld fell by lot to Hades."

-Hades ruled the underworld with his wife, Persephone, who was his queen.

-Hades was aided by a 3 headed dog called the Cerberus

-"Though Hades supervised the trial and punishment of the wicked after death, he was not normally one of the judges in the underworld, nor did he personally torture the guilty, a task assigned to Furies (Erinyes)."

-"Hades was depicted a stern and pitiless, unmoved by prayer or sacrifice (like death itself)."

-As Hades, he is the god to whom all must go, sooner or later 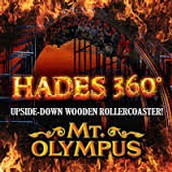