Hailee is using Smore newsletters to spread the word online.

Get email updates from Hailee: 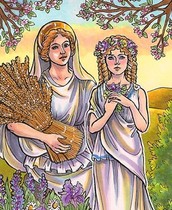 A. The consequence of Demeter's actions were that because she was so angry nothing prospered, nothing grew, the cattle all died, seeds would not come up from the ground, men and oxen toiled in vein, also there was to much sun and rain. Thistles and weeds were the only thing that would grow. It was thought that all mankind would die of hunger. Zeus said this can not go on so he sent the gods and goddesses to plead with Demeter.

B. Humankind suffered as a result of one individuals impulses because many people, plants, and animals died. Also that people became angry at Demeter because she wouldn't stop killing things and making it worse until she got her daughter back.

C. This myth suggest that the effects of an individual’s actions on the community as a whole can be bad. When Demeter wouldn't let anything grow and killed the people and animals that effected the whole community by not having enough food so it seemed that all mankind would die of hunger. It also effected the community because people grew angry but once Demeter got her daughter back everything started to grow again.

A.The Emperor's decision effected the whole community because if he picked a mean, or uncaring person life would be harder for the people in the town. He wanted to let his daughter rule because he trusted no one. I would want my Emperor to take this in to consideration because I wouldn't want someone who doesn't know what they are supposed to do or doesn't like anyone.

B. Yes it is important to consider the needs of a community of an individual because helping more than just one person is better. The Emperor wanted someone he trusted to rule the kingdom because he cared about everyone in the kingdom instead of making one person happy.

A. Coyote’s ignorance and selfishness cause harm to others because he opened the box which let out the sun and moon so now they have winter instead of summer forever. Now it will be harder for crops to grow and to produce food for people and animals.

B. I think that Coyote bears more blame for losing the sun and moon because he couldn't control his curiosity of wondering what is inside the box. Eagle should have been able to trust Coyote not to open the box.

C. This folk tale implies that an individual’s responsibility can affect a community because one mistake can change everything. Since Coyote opened the box now the whole community has to have winter, just like when they have to fix a bridge the rest of the people have to take a detour until they get it fixed.

Hailee is using Smore newsletters to spread the word online.