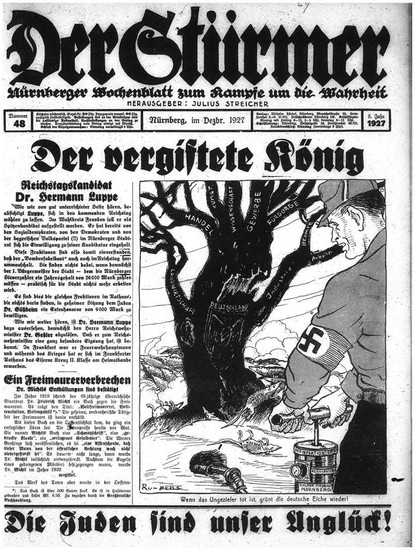 This is one of the many articles published from the popular anti-semitism newspaper, Der Stuermer (‘The Attacker’). The short, catchy slogan "Die Juden sind unser Ungluck" (The Jews are our misfortune), was written at the end of every article, inciting feelings of hatred towards the Jews. The purpose of publishing these anti-semitist articles was to convince the people of Germany (the non-jews) that they need to eliminate the Jewish race because the Germans are better and more perfect. The caricature in this particular article shows a Nazi pumping poisonous gas into the base of a tree, with dead rats representing Jews around the tree. The rats are labelled “stock exchanges,” “the press,” and “trusts.” The branches of the tree, labeled “Germany,” are industry, agriculture, commerce, the arts, business, etc. The caricature's caption is “When the vermin are dead, the German oak will flourish once more” (Der Stuermer December 1927). Stuermer uses the rhetorical technique name-calling when he refers to the Jews as “vermin.” Doing so demoralizes the Jews and furthermore convinces the people of Germany that the Jews as a race are “bad.” Having a caricature of the Jews as the cover of the article also shows how little respect the Germans have for the Jews.

U.S. war department anti-Japanese propaganda film 1945
This clip from an archival 1945 World War II propaganda film released by the U.S. War Department entitled "Know Your Enemy: Japan[s],” purpose was to educate American soldiers about their enemy’s history and society as well as the totalitarian nature of the Japanese state. Doing so kept the fighting spirit alive in the United States. The film was a compilation of footage obtained from newsreels, the UN, enemy film, fictional Japanese movies for historical background, etc. The film juxtaposes the ancient customs with the modern aspects of Japan. This incited a feeling of nationalism because the film focused on all the “strange” and different traditions/ways of life the Japanese had compared to the Americans, which furthermore encouraged them to win the war against the Japanese. 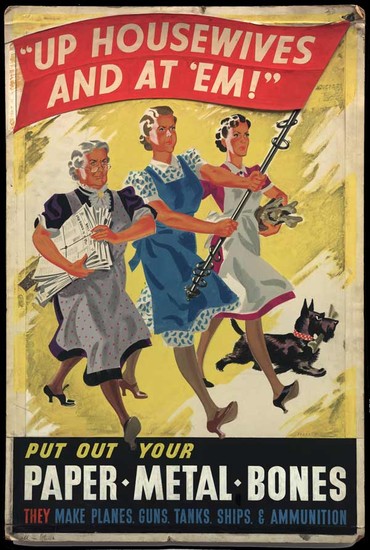 During the war, propaganda was used to get the citizens to help out and be involved in the war efforts. The posters urged householders to recycle scrap metal, rubber, paper and even bones in order to make ammunition shells (Lane 2005). This was also a way for women to be involved in the war without getting into frontline combat.

Iva Toguri D'Aquino (Iva Ikuko Toguri) reads propaganda from Radio Tokyo and talk...HD Stock Footage
During World War II Japan had been an enemy of the United States; the radio broadcast Radio Tokyo had been “demoralizing American soldiers” during the war, specifically Iva Ikuko Toguri d’Aquino or better known as “Tokyo Rose” (FBI). The use of this radio broadcast was to send messages to the soldiers and to update the people in the area about the war by using information about American locations and statuses. Tokyo Rose also made comments concerning the moral of the soldier, how they would lose, basically demoralizing and interfering with the soldier’s mind sets and patriotism.