Get email updates from Jackson:

Ernest Hemingway was born on July 21, 1899, in Oak Park, Illinois.
Ernest Miller Hemingway was an American novelist, short story writer, and journalist.
Hemingway started his career as a writer in a newspaper office in Kansas City at the age of seventeen. 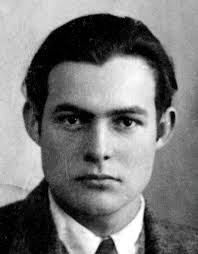 After the United States entered World War I, he joined a volunteer ambulance unit in the Italian army.
After his return to the United States, he became a reporter for Canadian and American newspapers.
In 1926, Hemingway wrote his first important work, The Sun Also Rises. 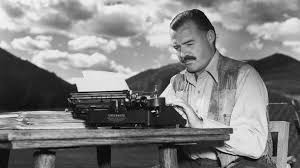 Hemingway won a Nobel prize.
When he was older, he wrote what some people think is the greatest short novel called The Old Man and the Sea.
Hemingway was a great athlete. He liked to fish, hunt and was a bullfighter.

Hemingway's mom dressed him and his older sister in matching pink flowery dresses when he was young because she always wanted twin girls.
He was not in WW II, but pretended to be a colonel in order to lead a group of French soldiers into battle against the Nazis.
Ernest Hemingway survived through pneumonia, skin cancer, hepatitis, diabetes, high blood pressure, two plane crashes, a ruptured kidney, a ruptured spleen, a ruptured liver, a crushed vertebra, a fractured skull, mortar shrapnel wounds, three car crashes and bushfire burns. 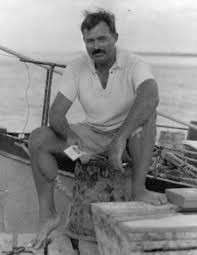 He used a machine gun to kill sharks so they would not eat the fish he had already caught. In 1938 he set a world record by catching seven marlins in one day.
Ernest Hemingway was paranoid and talked about the FBI spying on him when he was older. He was treated with electroshock.
His plane burst into flames on a runway. He used his head to hit the door twice with his head and got out.

Ernest Hemingway’s mother did not like his first book, The Sun Also Rises.
Hemingway's father wanted him to become a doctor, but he did not want to go to college.
Hemingway became a reporter for the Kansas City Star making $15 a week.
Mini BIO - Ernest Hemingway
Hemingway was married four times and had three sons.
Hemingway had a mental illness and died on July 2, 1961, at the age of 61. He committed suicide.

Websites for Facts about Ernest Hemingway