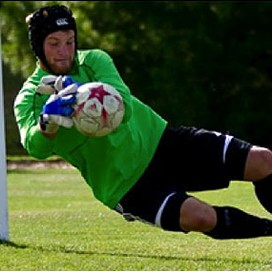 Inner Core- The Inner core is the very center of the Earth. It is not exposed to air at all. It is about 5,700 C, the hottest layer of Earth. To get to the center, you have to go 6378 kilometers. The thickness is 1216 kilometers. The Inner Core is Solid due to all the pressure from the other layers of Earth.

The Whole Core- The Core makes up 33% of Earths mass. It is made up of Iron and sulfur. 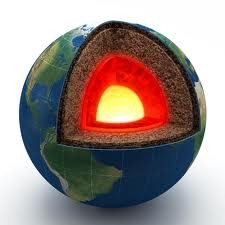 Lithosphere-The Lithosphere is the upper most part of the Mantle. It is what is in between the crust and Mantle. 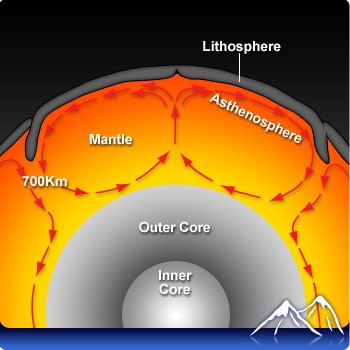 The Crust- The crust is 1% of Earth's mass. In between the crust and Mantle, it can get up to 400 C. To get to the crust, you just have to dig a tiny hole, and touch the dirt in that hole. The Crust is 5-70 kilometers thick, depending on where you are. 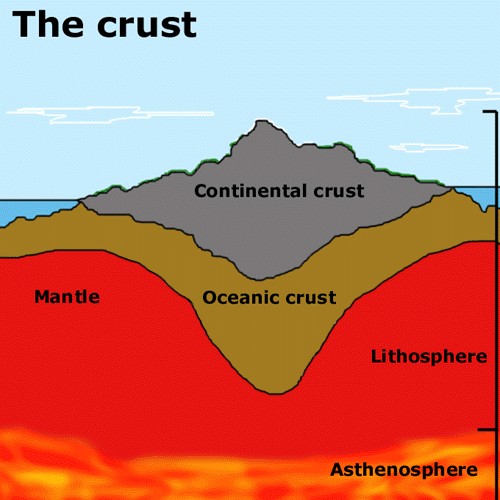 Convection in the Mantle

The convection in the Mantle is caused when the heat from the core has rises up to the Mantle, and since hot Mantle is less dense than cool Mantle, it rises. Once at the top of the Mantle, It cools, and moves sideways. When it is cooled, it gets more dense, and it sinks back to the lower part of the Mantle. That process continues in the Mantle and starts to move the Tectonic Plates. The Continental Plate moves over the Oceanic Plate, and once they over lap, they create an earthquake. The Plates move apart and the process starts all over again.
Click here for an Example of Convection Currents

1) How does the ocean floor move, but we can't feel it move, or sense, it move?

2) How does heat get less dense, but cool air, get denser?

3) How often do earthquakes happen when the Tectonic Plates overlap each other completely?

Layers of the Earth