What message do they send?

What message do they send?

Just by their unique nature and the way they were created, girls play differently than boys do & with different toys as well. Boys are builders and heroes-LEGOS, blocks, trucks, cars, firemen, dragons & knights, ect. are the toys you'll find them playing with. But more often than not, little girls are found playing house in their play kitchen with their dolls and strollers at their side.

If you would walk into a room with a little girl and a little boy and on the floor is a set of trucks and cars on one side and a baby doll and dress up clothes on the other what would happen? Who would be attracted to what? As Stasi & John Edlredge talk in their book "Captivating", which talks about the nature of a woman's soul, women are nurturers fashioned to be compassionate and loving towards others. This is why it is more natural for the girl to be gravitated toward the baby doll.

But girls' dolls are not what they used to be. Hypersexualizing the market of girls' toys is something on the rise that many are oblivious to. When we walk into the girls' toy aisle we are more than likely flooded with an array of pinks and purples. Most people don't think twice about this reality. "It's always been like that right?" they ask. But this is wrong-this reality is part of the effect of our over sexualized brand of girls toys. Instead of a brown play-brick doll house, a plastic pink mansion is found in its place. Instead of realistic, average looking dolls, dolls with insensible face and body proportions take their place. Theses are just a few examples of the changes seen in girls' toys over the past decade and more.

Quotes about the Nature of Women

-"To be when you are older that "you can do anything a man can do" isn't helpful, either. I didn't want to be a man. What does is mean to be a woman?" (Eldredge 4)

~We have lost the idea of who a woman is by her nature. Instead most focus on what her physical appearance accomplishes (often men objectifying women) & what can a woman do.

-"[There is] an underlying, gut feeling of failure at [who the woman] is... and the result is Shame." (Eldredge 7)

-"We, as women, define ourselves based on relationships: mother, sister..." (Eldredge 27)
~why girls play with dolls
~we like to dress up and play "mom" because it is in our nurturing and compassionate nature

~we were made to become moms and care for children

Popular Toys Through the Years & How They've Changed 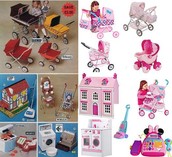 It is very hard to find a non-pink baby stroller these days. This creates a skewed look at motherhood for a mother of a baby boy would certainly not buy a frilly stroller filled with ruffles for her son. They would pick a stroller closer to a style on the left from years ago in either a red or popular navy blue color. 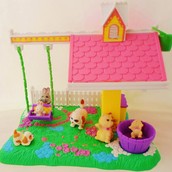 The first Littlest Pet Shops were introduced in 1992 as miniature animals that could go on adventures, often in their tree house. These Littlest Pet Shops are very plain and simple. The dogs are brown like dogs, the bunnies gray like bunnies, and look as close to the real animals as plastic toys can get. The play sets act as vehicles for the child's imagination. The line of toys died and retired in 1996. 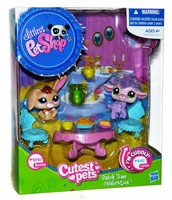 Toy designer Gayle Middleton redesigned Littlest Pet Shop toy line for the Hasbro company in 2005. It one of Hasbro's most successful Girl's Division line-ups now. But here is no much left of the old character in these Littlest Pet Shops "Cutest Pets." They now come in a rainbow of colors not only in their bodies but also in their big, vulnerable, girly eyes, influenced by Japanese animations. 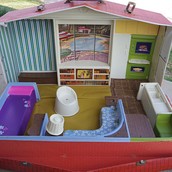 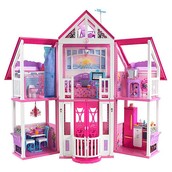 Barbie's house today is an explosion of pink. From the refrigerator to the front doors, every possible space is colored pink or purple. Barbie's house has also become very unrealistic with elevators and fancy extravagant bedrooms. 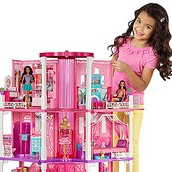 These houses become societal images of what the perfect house should look like and have for young girls. Not many 7 year old girls today would wish for the plain and simple Barbie house of the 70s instead of the fancy mansion Barbie now lives in. 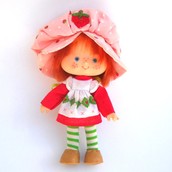 This is the original Strawberry Shortcake doll when it came out in 1980. Strawberry and her cat Custard originally started out as greeting card characters for American Greetings and then expanded into a doll, cartoon, movie character, ect. 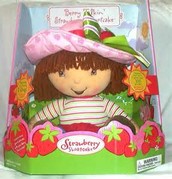 Through the years, Strawberry Shortcake's body began getting slimmer and slimmer as well as the shape of her face. Her eyes also grew and makeup added. 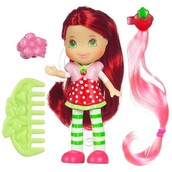 This new version of the doll was relaunched in 2008, 5 years after the first relaunch of Strawberry Shortcake in 2003.

The LEGO company was started in 1932 by Ole Kirk Christiansen, a carpenter from Denmark. These LEGO Bricks as we know them today underwent some changes and were reintroduced in 1958. By 1960 the LEGO company had gone international. 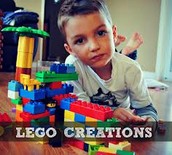 LEGOs have provided many educational lessons to children without them even knowing it. Not only do LEGOs build and promote creativity they also help kids develop their motor skills as they try and put the tiny pieces together. They also help kids learn problem solving skills as they build their creations and once they're finished builds the child's confidence seeing what amazing thing they have just made themselves.

LEGOs were often thought of as boy toys because of their primary and more "boy specific" colors. In reality this couldn't have been farther from the truth as many young girls found themselves building and creating with LEGOs with no complaint as to the lack of pink, purple, and pastel colored blocks. With true imagination and creativity, colors don't matter, just the structure one has built.

Girl LEGO Characters Then and Now

LEGO Friends was launched in January of 2012 and consists of sets like a veterinary clinic, a malt-style cafe, a beauty salon and a suburban house. But different than traditional style LEGOS, these LEGO Friends sets not only display a "think pink" theme throughout but they don't allow for creativity or innovation in the construction of these settings and structures.

There is much controversy over LEGO giving in to gender stereotypes. With the very rigid design of LEGO Friends, many people believe LEGO is making a statement about women's incompetency to build and create something out of their imagination. The other side of the argument though is that these new LEGO Friends fit with how girls like to play house and with dolls, which is what LEGO Friends gives them.

Video-Girl from 1981 Lego Ad Shows How Toy Has Devolved

Girl from 1981 Lego Ad Shows How Toy Has Devolved 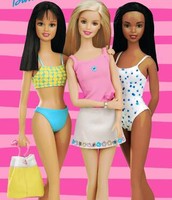 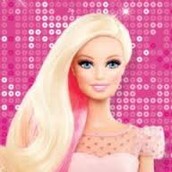 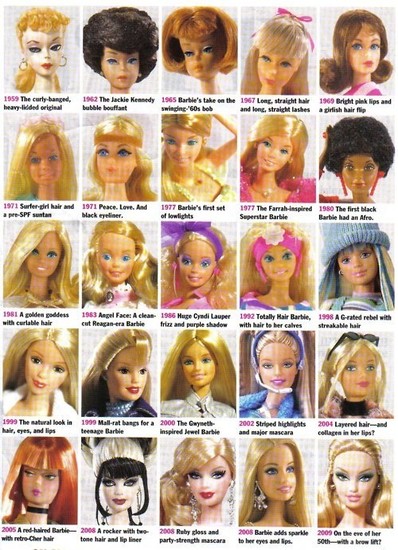 Top Picture: How Barbie's Body has changed since the 90s

Bottom Row: Doll on the left is the standard marketed Barbie doll of today, the doll on the right was created based on the average 19 year old American woman's body 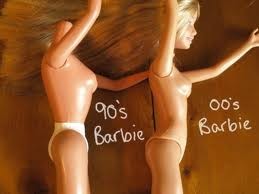 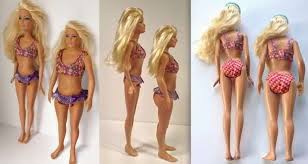 Nickolay Lamm created a spin-off of Barbie using an average 19 year old girl's proportions. His doll is shown above next to a marketed Barbie. He said in an interview, "I created normal barbie because I want to show that average is beautiful." 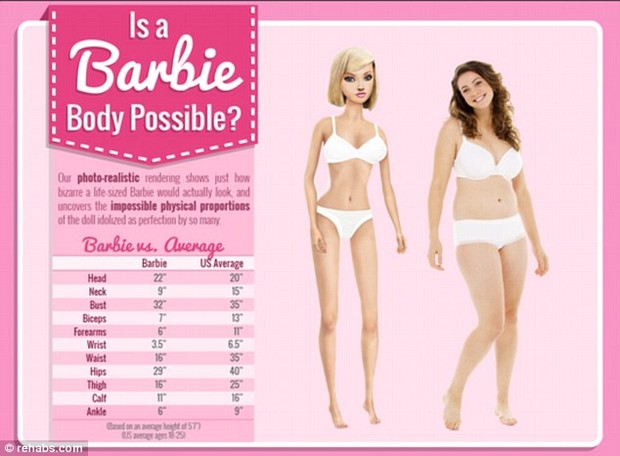 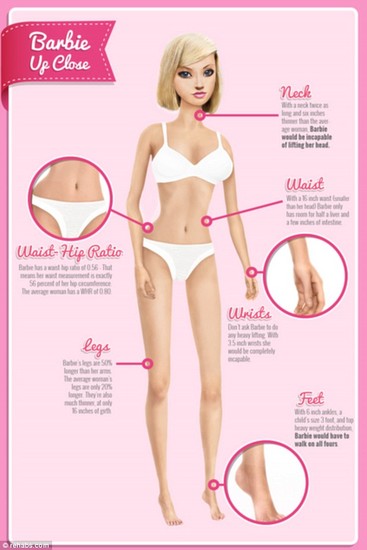 If a woman were to have Barbie's exact body proportions, she would not be able to function. Her waist would be 16 inches. Her wrists would be 3.5 inches thick. Her legs are 50% longer than her arms, where an average woman's legs are 20% longer than her arms. Her ankles would be 6 inches and would not be able to support the weight of her body, so she would have to walk on all fours like an animal. 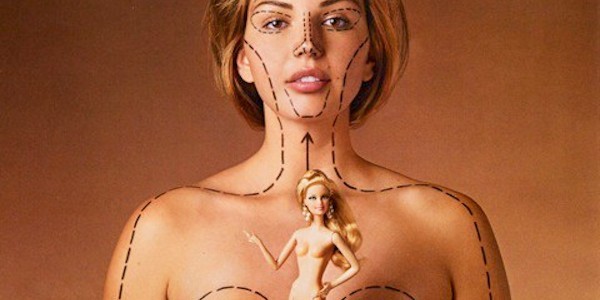 Barbie Before and After Makeup 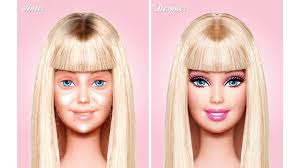 The nature of makeup is to enhance one's natural beauty. But does Barbie's image today send a message to a young girl that she isn't pretty without her makeup, that she has to hide every imperfection on her face?

Negativity Taken to the Extreme

Many people have strong negative opinions of Barbie due to her unhealthy and unrealistic body proportions. However, there are many positive aspects of Barbie as she helps kids create and dream up stories of how her and her friends will play together. She has also encouraged girls to work toward whatever career they dream of as well as broken racial stereotypes. Of course, her body proportions are not ones we should be stressing on our young girls, nor the amount of makeup she wears but she is not the only hypersexualized girl toy on the shelf.

One positive image that Barbie has provided through the years though is the reality of women in the professional working world. She no longer stays at home and takes care of housework all day but instead is shown going after her dreams and becoming the woman in the workforce she wants to be, against all stereotypes. Barbie's line "I can be..." features Barbie as a chef, a doctor, a professional business woman, and many other career figures. 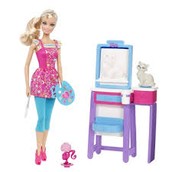 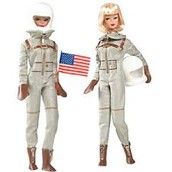 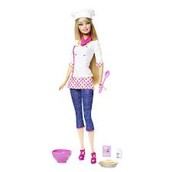 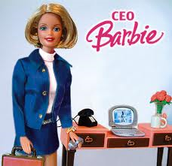 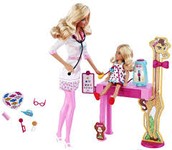 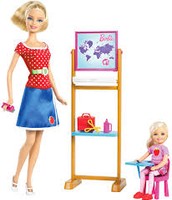 Variety of Races in Dolls

Though not original to Barbie herself, the company has been introducing more lines of other ethnic and racial Barbie dolls such as Japanese, Chinese, Hawaiian, Indian, Africans, ect. many of which come with traditional and cultural clothing.

Below: In 2012, Barbie launched the "I Can Be...President Doll" in honor of the U.S. Presidential Election. This line, complete with 4 Barbies of different races, was created to inspire young girls to become leaders as these barbie dolls stand on their own, literally. With her new shoe design, President Barbie can now stand on her own two feet (without a doll stand) on her presidential platform as she calls for girls to "B inspired," "B informed" and "B involved." 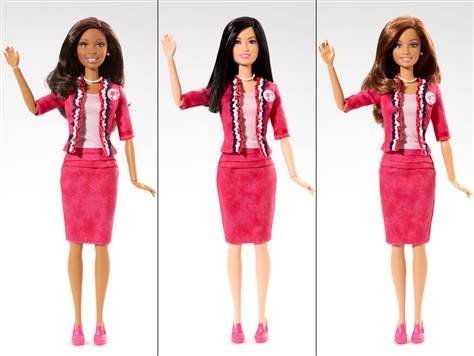 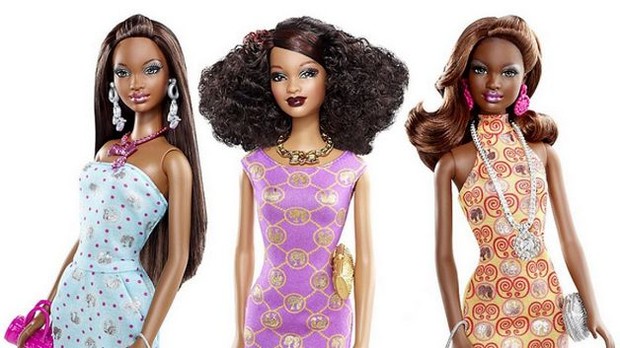 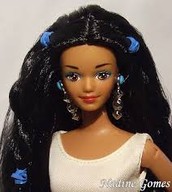 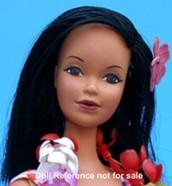 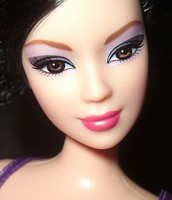 In a society where women want to be treated as equals to their male counterparts, this same society pushes for an even greater divide between the genders as girls toys are hypersexualized. This is something that not many people are aware of because it is a process that unfolds overtime. However, this reality that we live in with the hypersexualization of toys is something that we should take notice of. As the toy dolls get skinnier so do young girls' confidence levels. Of course a 7 year old girl may not starve herself so she looks like her doll Barbie but with a constant flooding of skinny supermodel-esque Barbies and as other dolls and toys follow suit, the young girl cannot help feeling fat or ugly when her toys look better than her. This negative influence of how far girls' toys have come over the years is a reality and something that parents need to consider. It is more important than ever for parents to build up a girls confidence at home and instill in her what true beauty is-their daughter can be beautiful just the way she is, despite what her toys' underlying message is.