- helping spread the idea of Communism throughout the world, responsible for the indirect deaths of millions, and preventing a democratic society to occur. 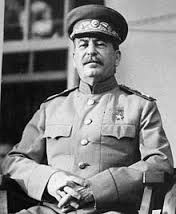 REWARD - Peace after the war, prevention of the deaths of millions, and 800 million Euros

Stalin as a young man

Propaganda of the dictator

This ruthless dictator must be stopped at all costs, exterminate with extreme prejudice. Any one associated with this man is considered an enemy of humanity, and therefore if able are to be take out (further cash bonuses await). Do not relate this to America in any way, if caught, everything will be denied and you too will be exterminated.