Get email updates from Zoey:

THE CREATION OF BELGIUM

At a congress in 1815, the Southern Netherlands (Belgium) and the Northern Netherlands were united to form one state, which would be ruled by King William I. After numerous events in Brussels in 1830 the king sent in his troops. They were quickly expelled on September 27th. 1830. After the rising in Belgium, they were separated back to the original states. On October 4, 1830 a provisional government declared independence. The next year on February 7th the national congress adopted a constitution that is still effective to this day. Belgium celebrates their independence day on July 21st.

The Cinquantenaire was created in 1880 under King Leopold II during the National Exibition to memorialize the fifteenth anniversary of Belgium's independence in Brussels. The monument sports an art and history museum, a military museum, a sports ground, a vintage car museum, and the Great Mosque of Brussels. This monument is a sign of nationalism for Belgium. This monument was important to the young country because it represented them being able to raise their Brabant flag for the first time as a true country. 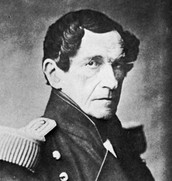 King Leopold I represents Belgium in the fact that he was the first king of Belgium after the revolution. Leopold reigned from July 21, 1831 (the day of Belgium celebrates independence) to December 10, 1865. He helped make the nation's parliamentary system stronger, was a leading figure in European diplomacy, and assisted Belgium in maintaining neutrality.

The national flag in Belgium, Vlag van Belgie, is vertically tricolored to represent the country's coat of arms. The colors are black (the shield), gold (the lion), and red (the lion's claws and tongue) with the black band nearest to the pole when flown. The flag was created on January 23, 1831, changing from horizontal to vertical to easily distinguish it from the German flag and to resemble the French flag, due to the fact that they had a revolution to break from the Dutch rule. It was a symbol of independence after the Belgian Revolution, with easily distinguished colors from other countries. 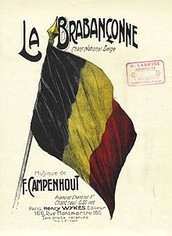 The name of the national anthem in Belgium is Brabanconne (the Brabantian in English).

"With blood to spill for you, O fatherland"

I translate this into meaning that the people will fight and are willing to spill blood to keep their country alive and to ensure that they maintain their independence.